The day looked like this about ten thirty as we began today's walk, the first leg of a projected forty-miler from Sausalito to Half Moon Bay. We parked at a friend's house — thanks, John — and he dropped us off at the north end of the Golden Gate Bridge. I've never much walking across that bridge: the traffic's pretty noisy, and the bicycles can be unnerving. But it was a fine morning, and we were rewarded with a fireboat, all nozzles streaming away, on evercises off Fort Point.

The three of us met up with another two at the toll plaza and reception center at the south end of the span, and soon hit the Coastal Trail, a marvelous walk on hard dirt, occasioonally on steps and staircases, diagonally descending, climbing, redescending the bluffs in the Presidio over the hidden beaches. It had rained yesterday and the colors, textures, and aromas were fresh and present. We met very few people on the trail, and for the most part had the glorious views to ourselves.

The trail took us on city streets in Seacliff, then back among cypresses on the old rail and streetcar right-of-way toward the Cliff House. From there we walked the packed wet sand along the great beach, stopping for a beer at the wonderful Beach Chalet, ultimately arriving at the night's lodging, a cheap motel on Sloat Boulevard across the street from the zoo. Dinner at a local Chinese restaurant, and now time to turn in. 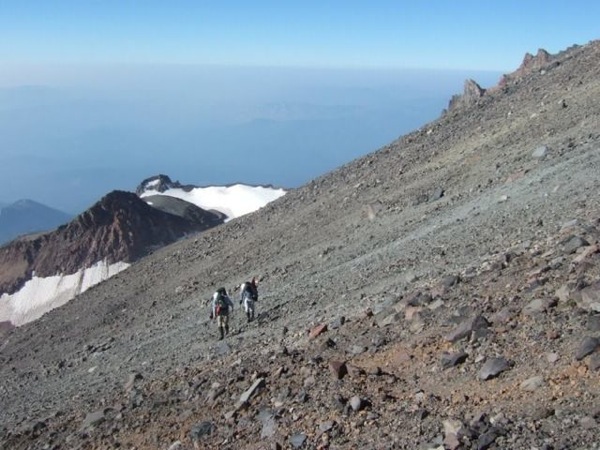 Eastside Road, September 14, 2012—
PERHAPS IT'S TIME to revisit this long-languishing blogsite. I conceived it originally simply as a site for dispatches from a walk from Lake Geneva to Nice, undertaken four years ago. Recently, though, there have been a few more walks. When I've discussed them at all online I've tossed the dispatches into another blog I maintain, The Eastside View. But that site is mostly for comments on the arts, reading, occasionally politics. Walking is so special; it deserves a site of its own. So I think it's time to revisit this site, not all that often, no more often than I actually take walks, or think about them, but certainly more often than every four years. This year there have been three walks so far. From Feb. 27 to March 7 we spent several days on trails in Limburg (Netherlands), east Belgium, and Luxembourg; I'm currently writing about that trip at some length and will post some of the results here as I get to them. Then in June I participated in a one-day 25-mile walk on the Sonoma County coast, from Fort Ross School north to Plantation; then back along the coast to Fort Ross itself. In August we took a nice daylong hike in the vicinity of Round Top, south of Lake Tahoe in the Sierra. Then two weeks ago I finally made my assault on the fearsome scree of Mount Shasta. I didn't summit; I'll tell you that right now. But I did pretty well. The write-up, with photos, is on my personal website.
Posted by Charles Shere at 11:26 PM 0 comments