June 8, 2013: Trail Camp - Whitney Portal; 6 miles; ca. 4 hours; down 4,000 feet.
Whitney Portal - Bishop by car, 69 miles; ca. 1 hour 30 minutes.
AWAKENED AT 3:30 by the others, who were getting ready for their breakfast and an early start for the summit, I found I had a headache — unusual for me. And it was generalized: it felt as if my skull were slightly too small for my brain, which surely can't be the case. Altitude; no doubt about it. I dozed while they fixed their breakfasts. At 4.30 I finally decided against the summit climb, for three reasons: I would slow the others down; I would be adding nearly ten miles and 5,000 feet of elevation change to the six miles and 4,000 feet (down, it's true) that I had to do today anyway; and I didn't really want to do it. Something of the same thing happened last September, when I attempted Mt. Shasta, a more difficult ascent though a somewhat lower summit. Again, I was with two dear friends (not to say close relatives); again, I was concerned that I would slow them down. It is a very interesting thing about summits, in my opinion, at my present state: I feel they will always be there; I'll always, or at least sometime perhaps, have another shot at them. On my terms: which means, taking plenty of time. They set off at 4:30; I dozed another hour. At about 5:30 I woke up completely, sun breaking through the rear window of my tent, oriented toward the east. Nico was stirring: having summitted the day before, he had nothing to do but break down his tent, pack up, and hit the trail for Whitney Portal. He didn't even wait for breakfast: he'd get a proper one when he hit Lone Pine. I broke camp along with him, and left Trail Camp at 6.22, carefully checking the time — I was curious as to how long the descent would take. My pack was hardly heavier than it had been on the ascent, even though I was now carrying my tent and sleeping pad. 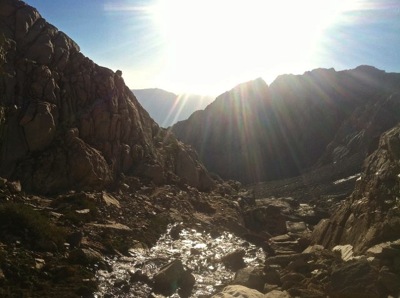 Descending is quite different from ascending. Your eye more easily lifts toward the distance, even though the terrain is just as irregular as yesterday's. The known is easier than the unknown, whether or not you're apprehensive about anything. I knew the structure of the hike: Trail Camp the departure; Trailside Meadow where camping was not allowed; Mirror Lake; Outpost Camp; Lone Pine Lake which really seems to me more a marsh; the sign marking the wilderness area boundary. The creek where Simon remembered the permit, and turned back. The trail is about two-thirds steps, on granite stones of various heights, requiring a certain amount of attention, and facilitated by the use of trekking poles. These are generally on switchbacks, though there are occasional straight stretches. A more welcome third of the trail is sand, dirt, or very fine scree, and here, whether switchbacking or not, I put the poles away for the most part, hoisting them nonchalantly behind me since there's no one there to threaten; or simply carrying them both in my left hand, swinging my right for balance, or tugging at the chest-strap of my pack. Along the way there was the occasional patch of flowers — columbines, as I thought; buttercups, I think; very nice red flowers that made me think of Indian paintbrush and owl's clover though they were clearly neither. I really must learn to identify these things. There was even one ranunculus, I'm sure of it; I didn't photograph it, but I recall it clearly; it looked just like the ones we've seen in the Italian alps. Finally I arrived at Lone Pine Lake: the trail was clearly less austere and rocky, more welcoming, moister. At one point there's a succession of logs you walk on to cross a wide marshy area; logs perhaps ten feet long, flattened on the top about nine inches wide, and set Lincoln-log-style on shorter transverse logs, perhaps two feet above the shallow water and its stone-covered bed. I'm glad my pack is snug on my back, nothing swinging. I hold the poles out from my sides, keep my eye on the end of each log, and set out fairly confidently. At the end of each you have to take a long stride to plant your foot on the next, but there's not that much to it, really. I arrived at Whitney Portal at 10.30, and after cleaning up a bit lost no time ordering breakfast: less than a quarter of a disgusting pancake, not quite done, over an inch thick, and a foot in diameter; delicious crisp bacon; a pint of raspberry-pomegranate drink; another of Gatorade; coffee; much water. At noon, a beer. Three men and two or three boys had taken up the next picnic table outside the Whitney Portal store, and I passed the time eavesdropping on their conversations. At one o'clock, lunch: bacon, lettuce, and tomato sandwich. How delicious to taste tomato and lettuce! The rest of my party showed up about 4.30, rather triumphant from their summitting, where they set a record, as they think, for highest cappuccino preparation — if a Moka pot can be said to produce caffe espresso. Now, though, they were ready for a beer. I didn't mind joining them: and then we drove to Bishop for the night: a nice hot shower, a change of clothes, dinner at Whiskey Creek Restaurant, and a good bed in a dodgy motel.
June 9, 2013, Sunday: Bishop - Healdsburg by car and bus, ca. 450 miles; ca. 9 hours
Up about eight; breakfast at a cafe in town, after looking at an unattractive "bakkerij" full of kitsch. (Come to think of it, Whiskey Creek was full of kitsch too, like Harris Ranch; but it didn't seem as offensive.) Then the long drive up to Reno, with fascinating conversation on the way — but conversation like that gets written about elsewhere, if at all. Lunch in Carson City after a short walkabout to see the splendid old capitol building, and a lazy coyote ambling across Main Street in the middle of town. Then on to Reno, arriving with twenty minutes to spare before boarding the bus for the ride back, through Sacramento, on to San Francisco, where Lindsey and Giovanna were waiting to take me out to dinner. It's a long way to drive for ten hours of hiking and two nights in a tent. But it was a fine weekend, and I'd do it again at the drop of a hat. Maybe three nights, so I can get to the top…
Posted by Charles Shere at 10:15 PM

Great account, Charles. I love the seamless flow of description — from the personal to the site-specific to the general and universal. And so evocative of backpacking trips I've done — and can't any longer because (for whatever reason) I now get quite altitude sick above about 6,000 feet. (I discovered this on a trip 5 years ago to scatter my father-in-law's ashes in one of his very favorite spots: not far from Whitney portal.) This story and photos was a treat.