Bramans, June 26, 2013 —
WE SET OUT southwards from Lanslebourg on a fine cool morning, down the Route des Petits Bonheurs, for an easy day's hike, mostly a very gradual descent, to Bramans, our only problem a little hunger: we had neglected to pack any food, and nothing was open en route — we've discovered this is dead season in the Maurienne, until 1 July; and furthermore the grocery store here in Bramans closes on Wednesdays. 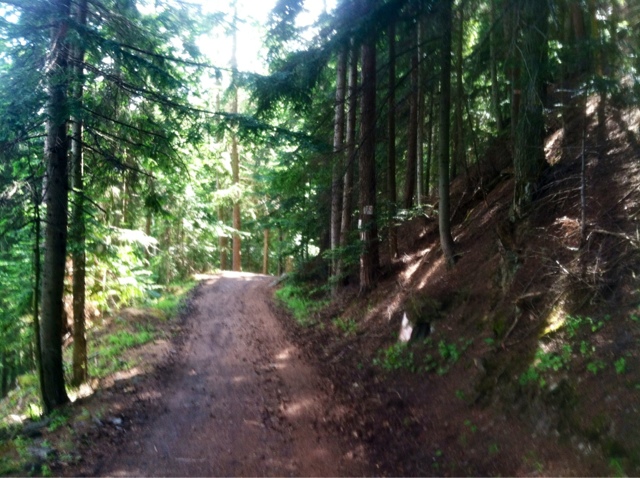 The Route des Petits Bonheurs — "small pleasures," literally; French has a saying that life is made of small pleasures; I like the implication of modest, everyday, randomly appearing little moments of satisfaction — the Route des Petits Bonheurs is a dirt road, a little gravelly in some places, hard polished clay in others, winding a few miles through forest and field on benchland above the left bank of the rushing Arc river. There are a few uphills, but in general today's walk — you can hardly call it a hike — descends gently to Bramans.
Five years ago I made this same walk, and wrote
In an hour and a half or so our forest road led us to yet another vieux village of stone-roofed buildings, Termignon, where we stopped for tea, and then to Sollières-l’Enverse, where a handsome, recently built museum of archaeology enlightened us as to the history (and prehistory!) of this once-remote valley…

But one reason I'm repeating the walk is to see how things have changed, and alas, they have, and not always for the better. Termignon's old village is now dominated by the huge bland condominiums and chairlifts of a modern ski-station. Yesterday, walking this same stretch in the other direction, we went into Termignon in search of tea, and found nothing open. Today we simply bypassed it.

We did stop in Sollières, where we made use of the little museum and talked a bit to the archéologue, who had interesting things to say about the two tribes of Neolithic people living in these valleys before the time of the Romans; but we didn't linger.

South of Sollières we took the paved road past the airstrip, where a snazzy little airplane sat parked, and then walked through the fields of flowers, some of which had recently been mowed for hay. 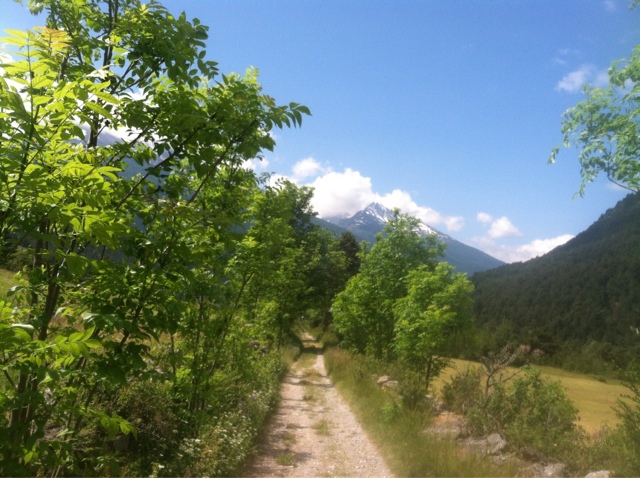 We hit Bramans about two o'clock and took a room in the one hotel. The hotelkeep confirmed our impression of the independence of these Savoyards, many of whom still resent the rigged election that forced them to become part of France, 140 years ago or so. Although I've yet to find anyone who speaks Italian in the shoos, cafes, or even hotels, the natives here have more in common, he assures me, with the Italian mentalité than the French, are more likely to visit Torino, when they want a big city, than Lyons.

We are now two weeks ahead of the schedule I followed five years ago, thanks to skipping the too snowy North, and of course the season itself is a little behind. Still, I think we'll be okay from here on. I called the refuge at Mt. Thabor to ask about conditions: there is a little snow, I'm told, but no problems.

So we'll walk slowly to Modane today, spend the night there, then take the bus to Chiomonte and Susa on Friday, for I too am drawn to Italy. Sunday we'll resume serious hiking with the hard climb to Thabor. I look forward to it!