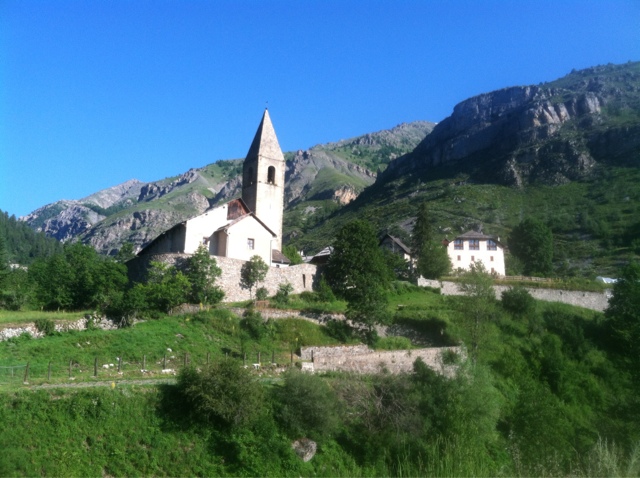 Leaving St.-Dalmas le Selvage
Breakfast was, surprisingly, in the living-dining room of the couple who own this auberge — their eleven-year-old daughter was not in evidence. As we walked to it, through the kitchen, i regretted we'd not dined last night en pension, entertaining (and good) as the next-door restaurant had been. Everything in this auberge is bio, and on one wall there was a small open cabinet of perhaps five shelves, each filled with little vials — there nust have been sizty of them. No idea what was in them. I posted photos of the breakfast room on Facebook: in the room, a Roland electric piano, a tomtom, a pair of bongos, paintings — not his, the host assured us; his are in the next room, hidden. And yes, that's turpentine we're smelling.
I was sorry to leave St-Dalmas-le-Selvage; it's very peaceful; everything — even the two or three buildings that eem to me new since five years ago — seems to be where it should, to look as it should. Of course it didn't hurt that the village was nearly empty. Four teenagers had been playing foosball on the machine outside the Bureau of Information last night, but they weren't around today. The village dog was lying on the street in front of the local-products alimentation. We stopped in to buy a saucisson sec for our lunch, then, at twenty minutes to nine, walked past the pretty little church whose interior I've yet to see and crossed the fine old bridge to take the ancient road up to the Col d'Anelle. 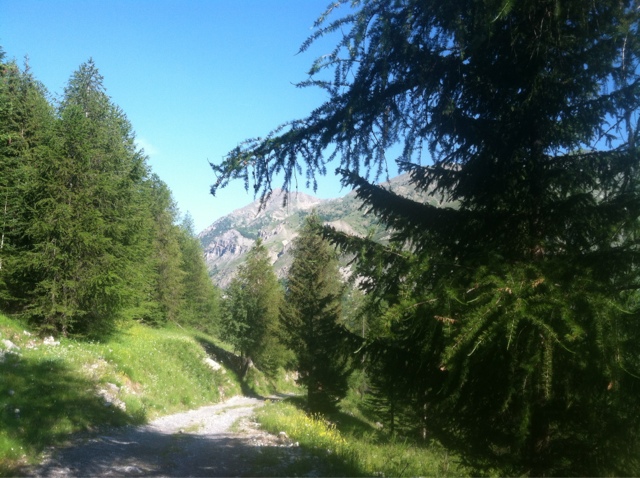 The road climbs gently between alpages on its left and forest on the right. It was a fine morning, blue sky, warm, with much birdsong in the air. We reached the col in a little under an hour.
The col is not particularly rewarding; there aren't really any extensive views from it. It doesn't offer a sharp ridge or crest, defining zones; it's more like a gentle hilltop — it's only 1739 meters high, 239 meters above St-Dalmas-le-Selvage. (5705 feet; 784 feet.) It was interesting to me for being the first one we've crossed without walking across snow, north or south side. From there it was a pretty simple descent down to the first real town we've seen since Briançon, nearly ten days ago. We walked into town alongside restanques, noticing thyme, lavender, and pinks in the path — the first pinks we've seen. Plenty of lizards, too. .
I suddenly realized the Bureau of Tourism would soon close — it was nearly noon — so we got away from the café we'd stopped at, on its bleak and tawdry street, and walked around the corner into the town center, alive with the weekly market and dressed up with a huge shade-canopy over the town square, a temporary stage set up at one end, and tricolor bunting and pennants everywhere.
The lady at the Bureau of Tourism was dry, stern, brisk. The hotels were all full; so were the gîtes. There was only one possibility. She made a phone call, then told us to go through the market, just at the end, past the school, on the right, was the Rabuons; we should talk to Mme. Jeannine.
This turned out to be a strange place. Mme. Jeannine showed us to a small, clean room with two small single beds, a plain armoire, and its own bathroom. We heard children practicing on string instruments, and were told the place offered all kinds of activities for vacationing families.
We showered and changed and went out to a nearby café for a coffee and pastry, but immediately a violent downpour chased everyone inside, grabbing folding tables and chairs to take with them. Another afternoon thunderstorm had rolled in. I asked the woman running the place, in fun, if she sold parapluies: no, but the souvenir shop next door did. We dashed into it and bought inexpensive compact folding umbrellas, stepped outside, unfurled them, and began walking back to our room. Immediately the rain stopped.
Since Rabuons had a pretty good wi-fi, I began working on accommodations for the next few nights. It's going to be difficult. We have a reservation in Roya night after next, though we should in fact be there tomorrow. There's nothing here in St-Étienne tomorrow, either. Finally I found a hotel a half hour's bus ride down the road at St-Sauveur, and took the room, though there's only one bus a day.
Then, though, the woman at the gîte in Roya called: do you still want to come tomorrow? We've had a cancellation… so I called St-Sauveur and apologized and then, while I could, researched beds for the next few nights: Sunday the 14th, the Vacherie de Roure; Monday, Les Marmottes, in St-Dalmas Valdeblore; Tuesday we'll be in Utelle already… absolutely no rooms in Utelle. Well, enough for tonight: let's have dinner… 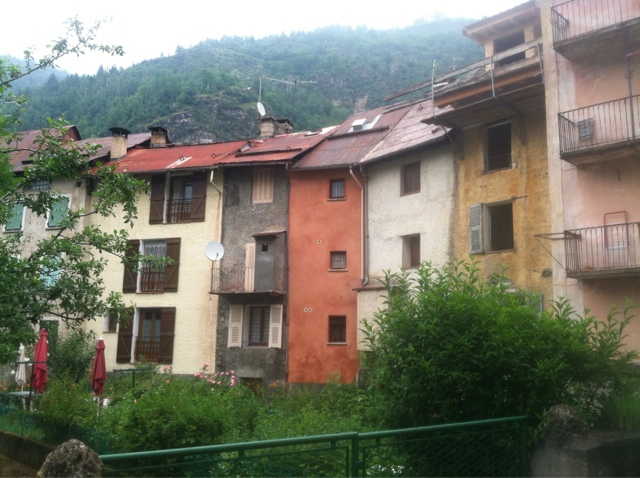