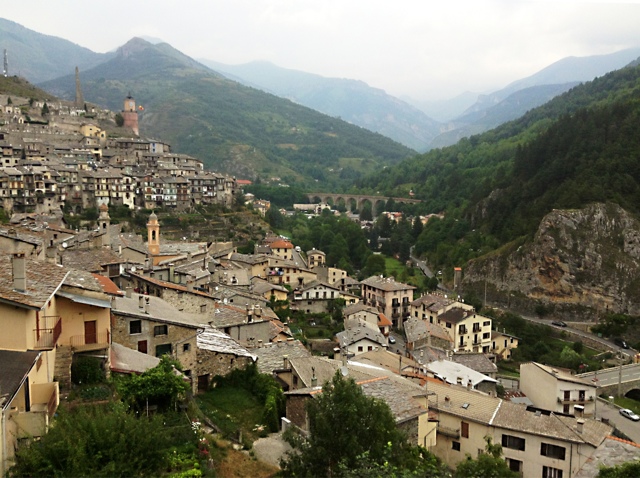 WEATHER INTERFERED TWICE with this Alpwalk, first when we had to give up the northern half, then when thunderstorms and hail beset the southern cols.
Now it's not weather but injuries that have detained us. No sooner had we resumed, taking the bus back up to St.-Sauveur for yesterday's walk to Valdeblore, than one of us came up with a tweaked back. That forced us back to Nice, where nothing could apparently be done on the weekend, but on Monday a trip to a chiropractor set everything right, and Tuesday afternoon we took the train to Tende to resume yet again.
I'm afraid I nodded off from time to time on the two-hour ride to Tende, but I was also awake a lot of the time. Once away from the coast it,s a dramatic ride: into tunnels, out onto high viaducts, or often on ledges: you look down what seems hundreds of feet to the streams below. You pass a number of "villages perchés" — villages perched like swallows' nests on the side of mountains.
We arrived in Tende about five o'clock. We heard distant thunder, and rain threatened but never really materialized. I know the main street from a number of drives up the old Salt Road from Nice to Torino, but I'd never been off that road. The town climbs dizzyingly up the south-facing flank of the mountain from the main road, stone houses with stone roofs, many of them four or five stories high by the time they climb from one street to the next one higher. 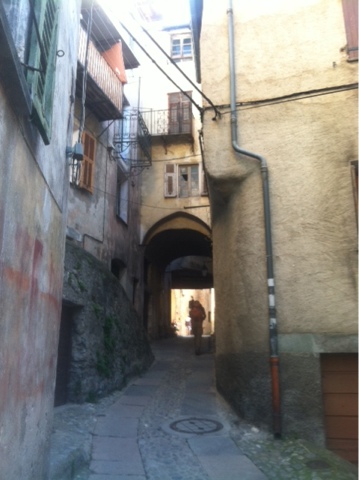 The streets are narrow, often no more than a donkey wide, often stepped, often leading away though an arch or under overhanging buildings, many dating back to the 16th century and before. At the top of Tende the graveyard climbs further, the lowest level set about with gravestones, the next two boasting more elaborate tombs, the last two or three, spread along over a stone wall, all uniform grey marble tombs, like drawers in a secretary. It's odd to think of the dead living there above the living: it brings the final scene of Our Town inescapably to mind. We had a good dinner in our gîte, and turned in early, eager to hit the trail tomorrow to the Vallée des Merveilles, so named for their thousands of petroglyphs.
Posted by Charles Shere at 7:11 AM