Beginning with the walk of July 14, additional photos from our walk across the Alps can be found here
Day 33: July 22, 2008
We left St.-Dalmas, a town I liked a lot, at eight in the morning, after a nice breakfast. passing its old church, crossing the Jalorgues, and climbing easily up a dirt road past pastures and in and out of forest, often turning around to admire St.-Dalmas as it receded from view. 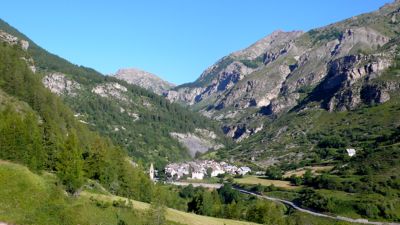 In a little over an hour we arrived at the Col d'Anelle, having climbed only 250 meters or so: but soon we could look down at St.-Étienne-de-Tinée, a good-sized town where we'd originally thought we'd be staying the night. It took an hour and a half to descend to the town across scree and through brush. Both terrain and flora had definitely changed in the last few days; we were well and truly in Provence: wild lavender grew alongside the path, and I stuck sprigs in my hat to try to discourage gnats. 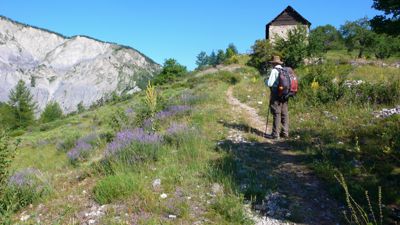 The descent to St.-Étienne took longer we'd thought, down a number of lacets — hairpins — on loose scree but through brushy country fragrant with roses, lavender, and, now, thyme and oregano; then along a fairly long traverse, losing altitude very gradually. The trail began to skirt houses clearly attached to the town, not farmsteads; then it became a footpath along walled gardens. Fig trees occasionally thrust branches over the walls, but we didn’t find any ripe fruit. 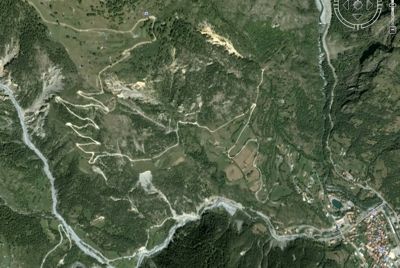 The lacets on the way to St.-Étienne: it's about a mile and a quarter as the crow flies from the upper left to the pond, lower right, and 550 meters down
(from Google Earth: hope they don't mind)
For some time we’d seen helicopters circling overhead: not surprising; the Tour de France was due to ride through town about five o’clock, and the advance press was there, working with the advance support. Nor were we surprised to see barricades at various intersections; vehicular traffic was being held up, or re-routed, to ready the Tour. But there was a much heavier component of security of various kinds than might usually be the case, because the President of the Republic was due to arrive any minute; he was delivering an important speech at two o’clock.
A friendly cop pointed out our best route into the center of town, and there in the market square was an incredible bustle of people — added to the usual mix of housewives, grandmothers, old men, and kids, a very large number of businessmen not normally seen at the market, all in dark suits, white shirts, neckties, and dark glasses, many with various decorations in their lapels. Clearly they were Important, and had to attend the President’s appearance somehow; I imagined it mustn’t have been much different at court, in the days of the Sun King, except for the business suits, of course.
  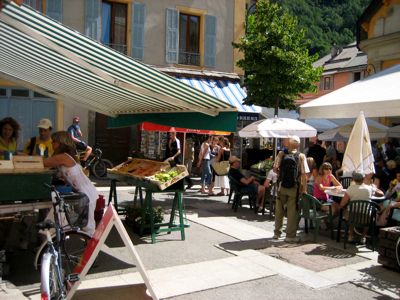 (photo: Mac Marshall)
Well: it was about eleven o’clock in the morning. We scattered to do our errands: bread, fruit, sausage, a bottle of mineral water for me, as my favorite brand had begun to appear in the stores. And then we got out of town. I don’t know what Henry and Mac thought, but the crowds and the noise were too much for me. I hadn’t realized how much we’d been removed, these last four weeks, from humanity in such concentration.
  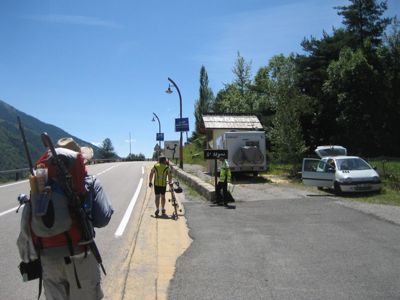 (photo: Mac Marshall)
We walked along the “highway” for a couple hundred meters — D39, a “Départementale” road, equivalent to a minor state road here; only two lanes, but with striped-off bicycle lanes: convenient, since a number of amateur cyclists were on the road preparing in some way for the Tour. Then we turned off, climbing a set of steps to a very steep forest path, then up more hairpins until we’d climbed 500 meters to reach Auron, a good-sized town at 1600 meters. In fact we climbed considerably above it, dropping down from a forested ridge three or four hundred feet above, and then had to walk down a disagreeable asphalt road, past garbage bins and recycle centers, to what turned out to be not a village, as I’d thought for some reason, but a ski resort. 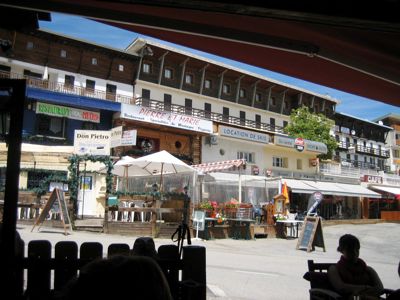 (photo: Mac Marshall)
I’d hoped for a hotel here: it was two o’clock. But there wasn’t a hotel, not one we could afford in any case. We stopped for a pot of tea, but the one café we found open was brusque and unpleasant. These ski resorts may be fun in season, but they’re not very welcoming in summer. We followed one lead after another in search of an internet connection, finally finding one in a hotel a little off-center from the town (and definitely off the GR5); here some of us found e-mail, and I left my glasses behind, had to go back, never found them, was giving up in despair, and then — at Henry’s suggestion — checked my pocket: there they were.
By now it was after three o’clock, and we still had to climb four hundred meters to the Col du Blainon. At first we were walking up through a ski-piste, under the ski-lift; then a long traverse; then the familiiar lacets to the pass, at 2000 meters, a little before five o’clock in the late afternoon. 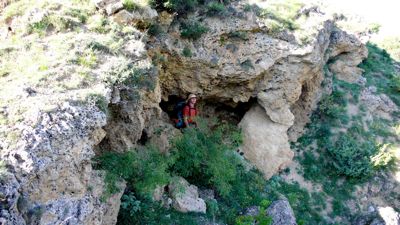 Our guidebook suggested it would be an hour from there to Roya, where we’d spend the night: but it took us forty minutes longer than that, chiefly because of the steep scree descent. We walked through plenty of flowered pastures, and past curiously pocketed rock-faces, often offering shallow caves that might be handy in a rainstorm. Roya turned out to be not much of a town, but there was a nice gîte d’étape, its shutters painted that flybane blue so popular in Provence. Our dinner was Provençal, too: after a potato-pea soup, a boeuf daube with pasta, really nicely cooked. The management was not Provençal; they were from Montréal: but they know what they’re doing.

all photos cs except as as noted