Day 38: July 28, 2008 (walkday 34)
SUNDAY, JULY 27, we rested — our first rest day since the 12th, two weeks ago. I’d grown so used to the pace I hadn’t noticed. Books had warned a day a week’s a good idea, and so had our Austrian friend Sabine Schroll, when we talked to her in Switzerland, a month and a day ago — it seems both just last week, and years ago. The sense of time has been completely changed by this walk.
But today, Monday the 28th, was to be the last day of the walk. We would be lazy: we left our backpacks in the apartment. We had a leisurely breakfast, then walked down to the station to catch the bus back to Levens, riding a route we’d taken Saturday in the opposite direction. An interesting ride, I thought, quickly through Nice and its outlying sections, then on D19, the Route de Levens, through Les Moulins and Tourrette-Levens, past quarries and car-lots. I kept looking out the window, trying to guess where the afternoon walk would take us: hard to tell. Five weeks on trails, and I’m no better a reader of maps than when I began.
We had an early lunch in Levens, same café, same salad, same waiter who knew us, of course, and recommended his family’s hotel in the Tende if we should get over that way; and then we set out on the trail, leaving town a little before one o’clock. 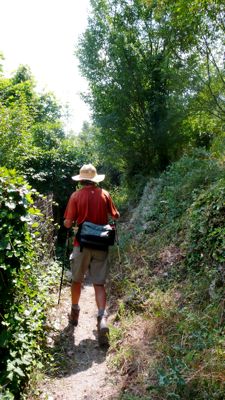 Quickly we were in the countryside, a dry, warm, teeming countryside: it’s dry, but there’s been plenty of water to push all this underbrush. We walked alongside walls containing suburban gardens, I suppose; and then through mixed forest; 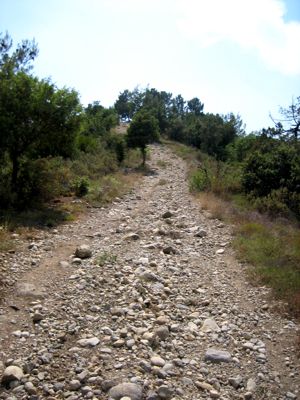 photo: Mac Marshall
up rocky trails through maquis; and along a dirt road on a ridge finally bringing us to the town of Aspremont, where we’d imagined there’d be a pot of tea for us, or maybe some eau minerale gazeuse for me to pour a bit of Fernet Branca into. It was not to be: the hill town itself lies off the GR5, and no one seemed enthusiastic about walking off-route. One café was on the main road our path had joined to circumvent Aspremont, but it was closed. 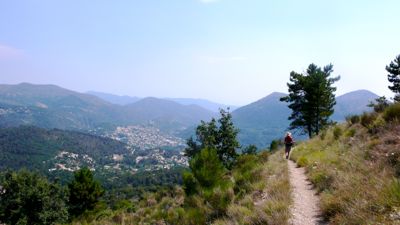 We walked on, past a big construction site, then up into the maquis, dry chapparal. We’d been hearing cicadas for some time; now the sound was constant. We were walking a ridgeline, the Crête de Greus I think it is, south into the sun and toward Nice and the Mediterranean, 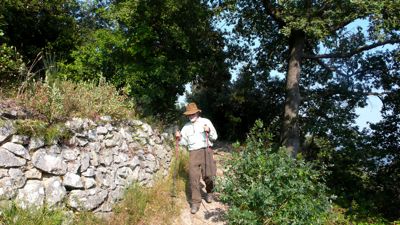 down past stone walls, under pines, and out 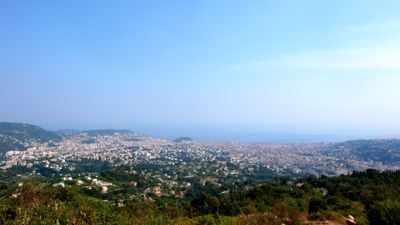 onto a surprising flat perched above the city of Nice, a broad prairie that must have been farmed up to a few decades ago — ruined restanques and a few ancient olive trees stood mute testimony. 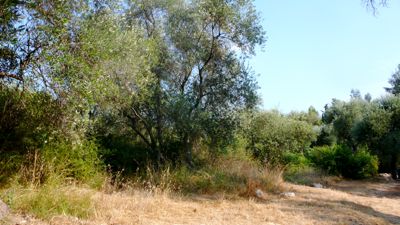 The GR5 does not actually end at the sea, though: it disappears — or at least its reassuring red-and-white balisage does — at the Carrefour de l’Aire-Saint-Michel, still 314 meters above sea level. Here there were still surprises: 5:49 pm, a parklike area, rather abandoned-looking, with trails, old walkways, sycamores. 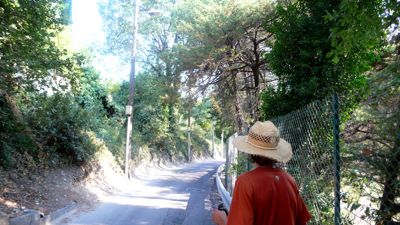 Six o’clock: paved road, cyclone fence, the outskirts of town. No cafés in these residential quarters: we continued walking 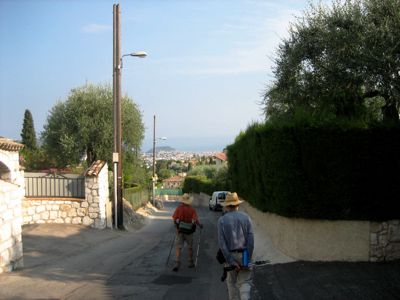 past walls and hedges, always downhill, always toward the sea.
We walked, as usual, mostly in silence, saving conversation for the rest stops, the occasional viewpoint or photo opportunity. About seven o’clock we came to the busy Place Alex-Médecin, and here on a street-corner was a pleasant-looking bar-café: time for a celebratory vin blanc next to a table of geezers who eyed us curiously. One struck up a bit of conversation: Are you Canadian? No? Not English, are you? What? Californians! Welcome to Nice; congratulations on your walk! 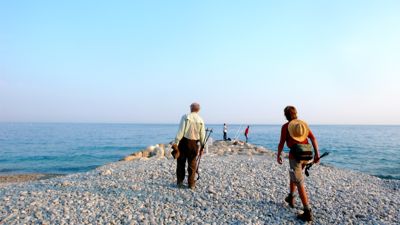 At 7:45 I watched Mac enthusiastically approach the sea, Henry on his heels. We didn’t strip and run in; it was late; we were a little tired; I was a little self-conscious. There weren’t many people on the beach, but that wasn’t it; I just felt a bit let down. No question of walking further: nothing but salt water between us and Corsica, I guess. 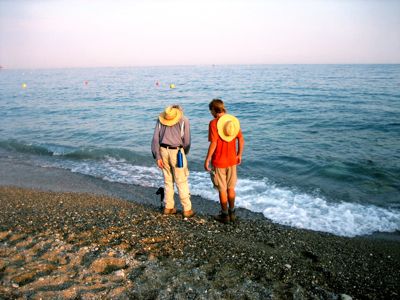 Mac took a picture of Henry looking on as I looked down at my boots on the pebbles, foamy sea-water licking lazily at my toes. What a wonderful pair of shoes you’ve been; what a long way you’ve come; how kind you’ve been to me. 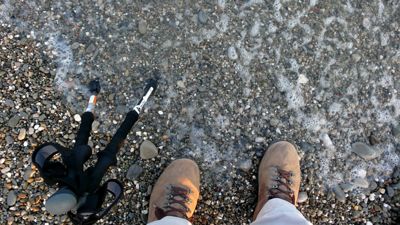 Then Mac joined me at the edge of the sea where we posed for a final photo. No tripod; no self-timed possibility. Two old men, backs to the sea, captured by a fifteen-year-old boy who was finally seeing the Mediterranean up close. 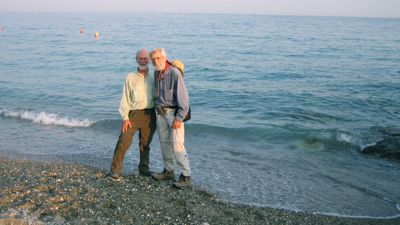