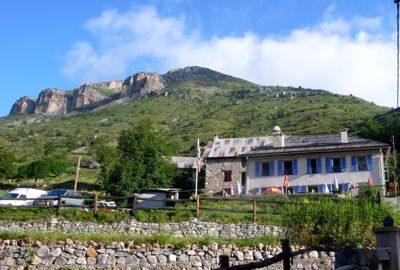 Today’s walk was an easy one: 13 miles in about nine hours, with about a mile of dénivelement, elevation change, over two cols. And it was a glorious one: clear, breezy weather, endless vistas, changes of terrain. But psychologically it was difficult: we’re near the end of our Long Walk, and a little regret is setting in; I’d like this to go on forever. 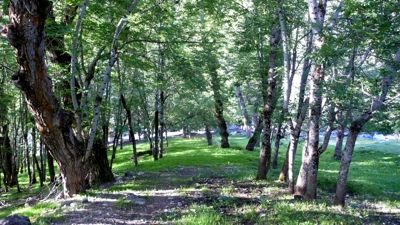 We said goodbye to our Montréal-run gîte d’étape after the usual breakfast and set out a little past eight o’clock, down a park-like river valley, past stone cabins and ruins, soon entering the Mercantour national park without really realizing it. The trail was rising, almost imperceptibly at first, past limestone cliffs with here and there a waterfall. 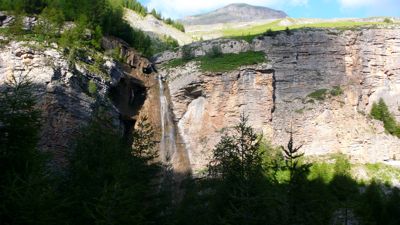 My guidebook suggested it would be four hours from Roya to our first high col, but we took five and a half. The Saillevieille valley was warm and pleasant, with warm flat stones here and there to rest on, 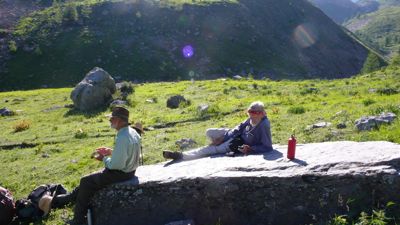 Mac and me, resting

but at the southern end of the valley the trail began to climb more steadily, the terrain grew rockier, the air more fragrant of sheep, goats, and donkeys, 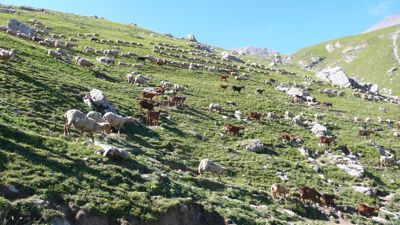 contrasting with odd miniature alpine rock-gardens growing apparently of their own volition. 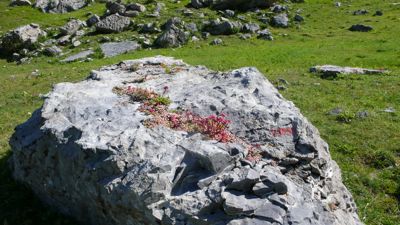 We climbed up a scree bank by a series of lacets, heading east now toward the ridge, where we rested and admired the view while Henry scampered up to the right to try for a glimpse of the Mediterranean. The view was extensive, but he was disappointed; I think it cannot yet be seen from this height and distance, 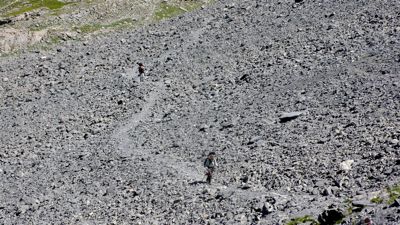 From here it was an hour’s work to descend to a replat, a natural terrace on the shoulder, and then climb again, this time to a more definitive col, de Crousette, marked curiously by a broken Roman marble column dedicated to the memory of Lt. Vallette-Viallard, who died here in January 1938, if I read the inscription accurately. 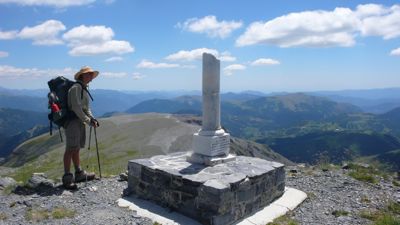 Henry at the stele
The view from this col was extraordinary; remembering that my little Panasonic camera can take movies of a sort, I took a shaky panorama of 360° — but again we were disappointed not to see the Mediterranean, now only three or four days distant.

Had we time we could have taken an hour’s side trip and climbed to the last nearby high Alp, Mt. Mounier, 2817 meters (9250 feet); from there, our guidebook promised we would see the Mediterranean on a clear day, even Corsica. Next time I’m by I’ll certainly do it. We pressed on, though; walking southeasterly on the ridge, then dropping precipitously by the familiar hairpins to reach the much lower Col de Moulinès by three o’clock. 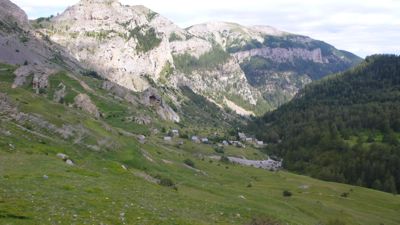 Now we descended further, heading east, the town of Vignols below us in its valley, on the south. It looked as if we should be headed there, but soon we turned north to cross the Démant torrent, then east and northeast, always admiring the Démant gorge with its fantastic rock formations but at the last minute obviously headed for a narrow defile, truly a portal, the Portes de Longon, which opens into the “hanging valley” of Longon. 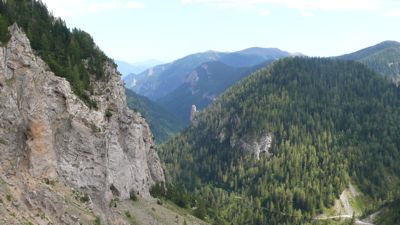 At the foot of a steep ascent into those Portes a big, old, serious white dog awaited us, eyed us, then turned and slowly, quietly walked on ahead of us. Mac, who has an eye for flora, fauna, and classifications, knew instantly that this was a Great Pyrenees; this made me wonder if the dogs we’d seen earlier might not have been Pyrenees rather than Tatra as I’d thought. 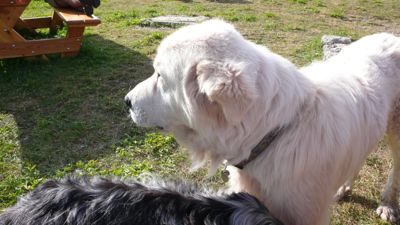 Well, they’re both big; they’re both white; they both guard sheep for a living. The Pyreness seems more appropriate to these southern Alps, it seems to me. 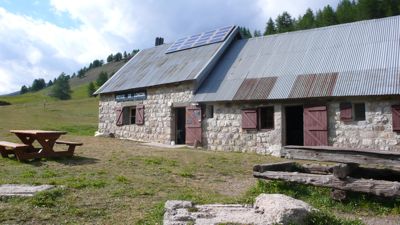 In any case he led us on the remaining two or three kilometets to our refuge, the Vacherie (cowshed) de Roure, and it turned out to be very pleasant indeed, with a nearly empty dortoir, a donkey to admire, picnic tables in the slowly departing afternoon, a delicious vegetable soup, eggplant in rice, and ham with pineapple. 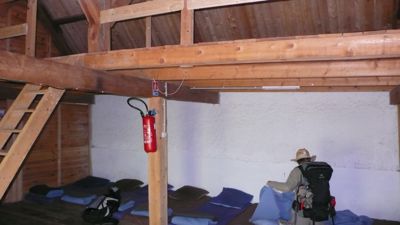