Beginning with the walk of July 14, additional photos from our walk across the Alps can be found here
Day 32: July 21, 2008

A SPECIAL MORNING: I opened the last of the four volumes of my topographical guides for The Long Walk: we were leaning into the end of the trip. We left our dubious gîte in Larche at 7:30, walking a country road along the Ubayette, 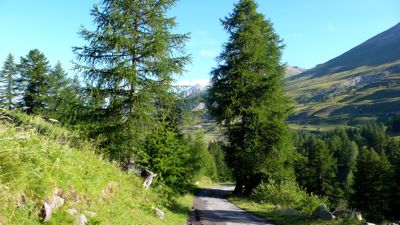 and reached our first waypoint, Pont Rouge, in an hour or so, resting there for fifteen minutes. This was a trailhead parking lot, and there were a few cars already parked there: at this point you enter the Mercantour national park and its natural-reserve Lauzanier valley. 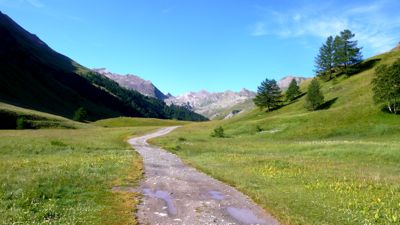 I've read that there is some concern about disappearing species of wildflowers even here, thanks to the traditional transhumance which encourages flocks of sheep and herds of dairy-cows to browse these meadows in the high summer: but we saw plenty of wildflowers everywhere; we were told this was a special year for them, thanks to heavy May rains. 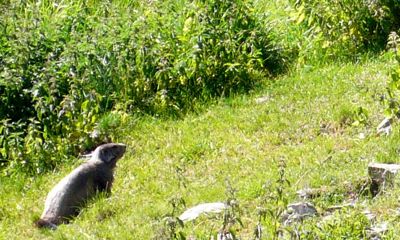 There were also marmots everywhere. I was grateful for the country road we continued to follow; walking the grassy meadow among all those marmot-holes could have been treacherous. Before long the road narrowed to a footpath leading through occasional rockslides toward the end of the valley. 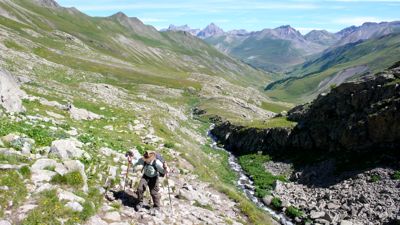 I looked back toward the north to see Mac toiling up the loose rock, his blistered left foot troubling him; then stepped over a slight rise, too low to be called a col, and there ahead was the true end of the valley, the marvelous Lac du Lauzanier. 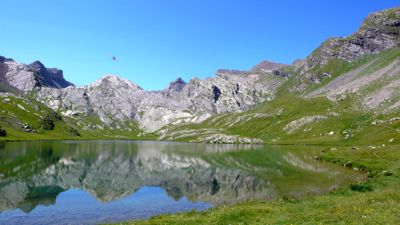 Here we had a little company, two or three clusters of day-hikers and one campsite. But it was utterly quiet, the surrounding amphitheater of rocks and mountains enforcing a pristine silence in the high thin air; even the marmots had stopped their whistling. Eleven o'clock: we rested ten minutes, then continued, skirting another, green lake, climbing over loose scree, past occasional patches of snow, up to the Pas de la Cavale, at 2671 meters (8760 feet) the third highest col of our entire walk. 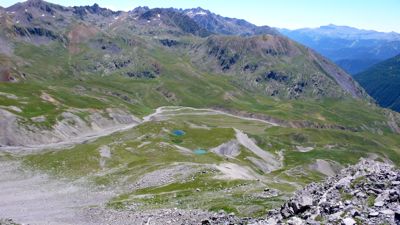 Down, down, ahead of us, was a new landscape, dotted with perfectly round pools of various shades of blue and green. We heard bells, and I'd been smelling sheep for some time; we were certain they were ahead of us somewhere. (Maybe tonight I would finally have some lamb chops!) We spent nearly half an hour at the col, resting and picnicking and admiring the view. 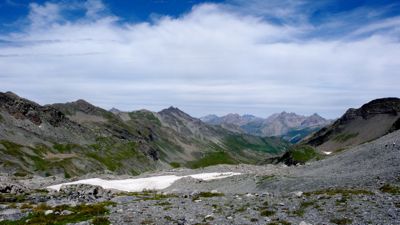 Then it was time to descend by quite steep hairpins. We were thankful there was no wind: our topo-guide warned us of blowing stones during times of heavy wind. 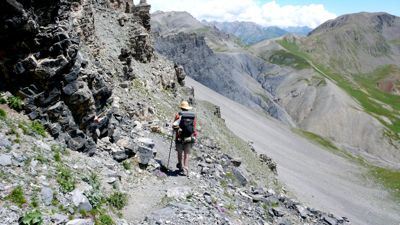 The path occasionally followed narrow shelves between cliff and drop, with plenty of loose stone and scree underfoot; then suddenly we were met by a tired old white dog, and he accompanied us to a rise above an enormous flock of sheep. 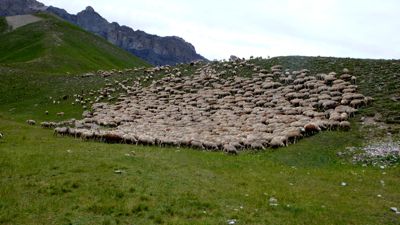 We skirted the flock, taking care not to upset the other, more professional dogs — ours seemed to be a pensionnaire — and continued, crossing the Tour ravine (and, on stones, the Tour torrent itself), and then climbing up to the Col des Fourches. Here, at three o'clock in the afternoon, we looked back at the country we'd traveled, 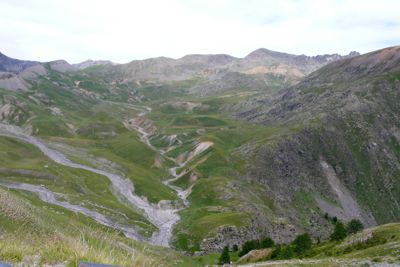 with its many streams draining the cols and summits, cutting the ravines and dumping the stones we'd been contending with. Looking forward, we were surprised to find the paved road, D64; I suddenly realized this country looked familiar because we'd driven that road, the Bonette Pass road from Nice to Barcelonnette, many years ago. 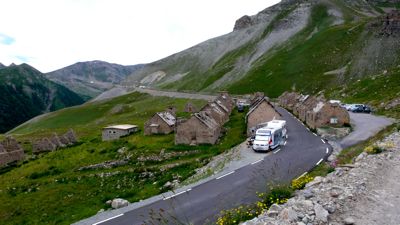 There below us was a scattering of ruined stone cottages, military buildings no doubt; and various sorts of recreational vehicles were beginning to park among them, for the Tour de France was to bicycle through here tomorrow or the next day, and bike-race fans were already staking out their places. This, of course, was the problem we'd been running into concerning hotels and gîtes: from all over Europe, fans were coming here to the Ubaye to watch the race. We walked on down a quite steep trail, cutting across the hairpin lacets of D64, to the town of Bousiéyas: maybe there'd be a last-minute cancellation there.

There wasn't. We had a pot of tea and rested up a bit while waiting for another American, one of the very few we'd seen on GR5, to find a bed for himself: no luck. Now we had two options: stay on GR5, climbing 350 meters (1100 feet) to the Col de la Colombière, only to drop back down the other side to St.-Dalmas-le-Selvage, or walk around the oddly named Tête de Vinaigre on D64. GR5 would be about ten kilometers and the 700 meters of dénivelément; D64 would be twice the distance but constantly descending.

I hate walking on asphalt and wanted to see the pass; Mac's feet were killing him. We tossed a coin; he won. I insisted we hitchhike, though, and before we'd walked a kilometer a nice lady pulled over to give us a ride. It turned out she ran the B&B in Bousiéyas and no, she had no beds that night: everything had been booked up weeks ago. We had a nice conversation; she told me that her husband had seen a wolf a week or so earlier, down by the torrent; wolves were becoming increasingly common, and the shepherds weren't happy about it — this explains the move from border collies to Tatras, an all-white mastiff, much bigger and I think less nervous than the collie. 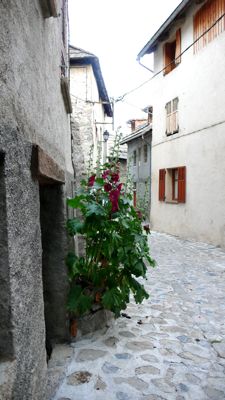 She dropped us at the side road leading up three kilometers to St. Dalmas, which turned out to be a very welcoming, picturesque village, much nicer than those that had disappointed me in the Arc valley. We stopped at the tourist office just before it closed, at six o'clock, and found a room easily enough — St.-Dalmas is not on the tour de France route — and discovered there was a fête de danse in the village square, where three musicians worked hurdy-gurdies, a violin, and an accordion, and explained how to perform various ancient villager dances.

What a difference between Larche and St.-Dalmas! 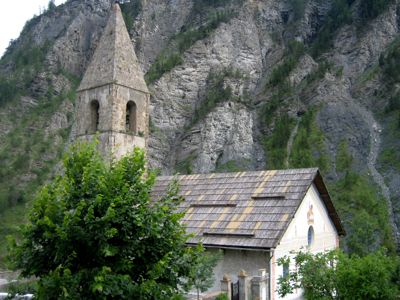 photo: Mac Marshall
"The northernmost village in Alpes-Maritimes", it has a Romanesque 12th-century church, a cluster of stone houses, hollyhocks and geraniums, quite a good restaurant, wonderful sudden detailed views — we were lucky to have arrived early, thanks to our hitchhiking, and have time to explore. I did not have lamb chops: I ate maigret de canard and cote de porc. But Mac had lamb shank, the last one from the kitchen, and said it was the best restaurant of the walk.

all photos cs except as as noted
Posted by Charles Shere at 2:02 PM