Day 37: July 26, 2008 (walkday 33)
I LOOKED AT THE GUIDEBOOK at breakfast, as usual: another really long day, one of the longest of the trip. The profile shows a steady climb in the morning, to our last high col at nearly 2000 meters (6500 feet); then a steady descent in the afternoon to Utelle at 821 meters, with only a teeny bump up for variety. It’s a long day because there’s no place to stay before Utelle: and even that was problematic, but I found one hotel with a vacancy. A long day, but no problem for me; altitude won’t be a problem. Heat may be. But my feet haven’t given me any trouble and my back and legs are strong.
We left about 8:45, after buying provisions at the local grocery — dried apricots, a can of juice, bread, salami. There won’t be any place to provision on the trail. We began with a steady climb up 400 meters or so to our first col, the Col du Varaire, 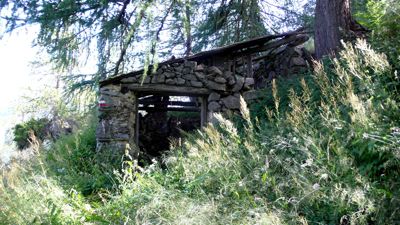 arriving only fifteen minutes behind the time allotted in our guidebook: very encouraging. Even better, we reached the Col du Caire Gros, two hundred meters higher, ten minutes ahead of schedule. 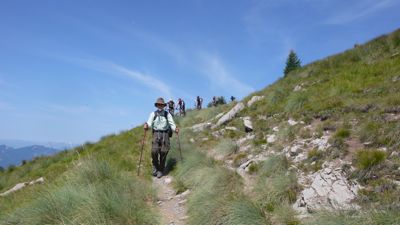 Mac pursued by trail bikes
A short rest before tackling the easy traverse to our next goals, both reached on schedule. Twelve noon; the Baisse de la Combe; and then forty minutes later we were on the Collet des Trous, the day’s highest point, the last height of our walk at 1982 meters, 6500 feet. 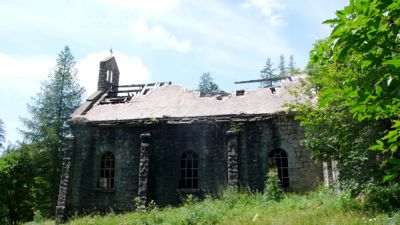 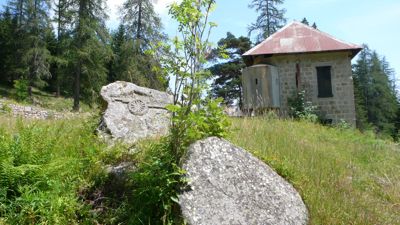 20th c. pillbox glued to corner of older stone barracks
(note relief of caisson on granite stone)
Less than an hour later we were at the Col d’Andrion, and beginning to wonder just why so many cols were needed on this stage of our walk. A “col,” to answers.com, is a “pass between two mountain peaks or a gap in a ridge. [French, from Old French, neck, from Latin collum.]” Problem today is, we’re walking on pretty even terrain for a number of kilometers, along a ridge; cols and collets come thick and fast. 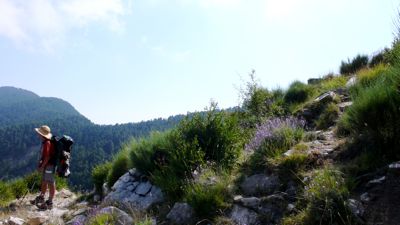 From the military camp we walked along a paved road for D332 again, for quite a while; then turned into forest again to drop to yet another gap, theCol des Fournès, and then an hour lager the Col de Grateloup — “scratch-the wolf”: where do the French get these names, anyway? 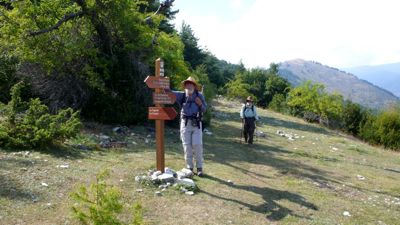 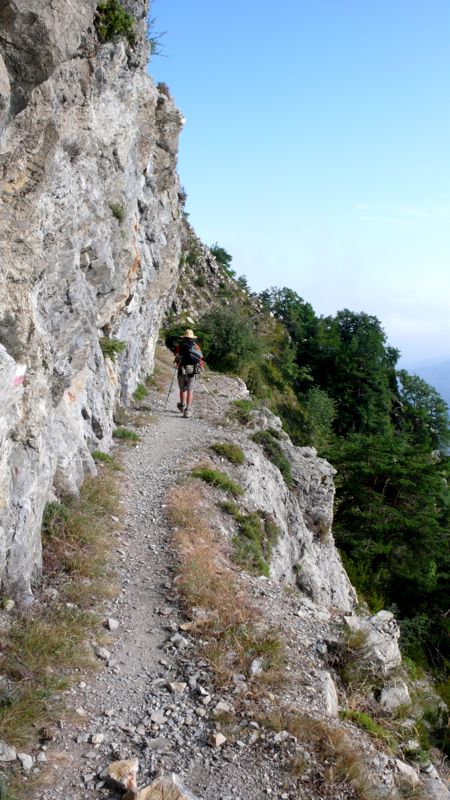 We know there was a dramatic turn or two yet to come: first, the Brèche du Brec, the “breach of the Brec,” the Brec being a major upthrust on the ridge running southerly toward Utelle. The terrain now was unforgingly Provençal, southern, dry, almost arid. One guidebook, Walking Europe from Top to Bottom, even warned against venemous snakes, and in fact we did see a viper or two on the trail. 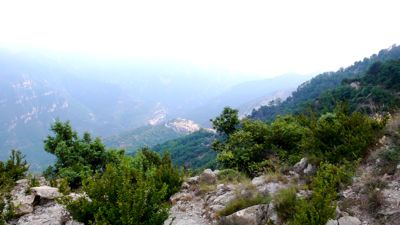 The pass itself was remarkable, one of the truly memorable events of the entire five-week walk: at a couple of points cables assisted, handrail-wise, in getting past spots that may have fallen away. A sudden climb took us to a thumb of rock from which we looked down onto the plateau town of Utelle, a sort of island of stone placed at the meeting-point of five or six distinct valle¥s leading away like spokes on a wheel. Some of these valleys lead in turn to important mountain passes: this must have been strategic territory for millenia. 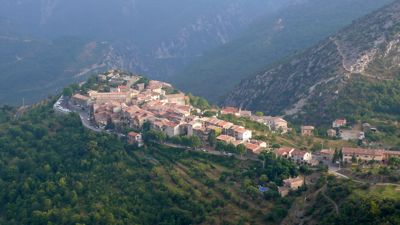 The descent from the Brèche was fairly steep: seven hundred meters in six kilometers or so, down dry and loose terrain though on well-defined trails. By now one of us was limping, walking very carefully. I asked Henry to go on ahead: it was getting late, and I was afraid the hotel restaurant would be closed before we got there. I knew, too, that at seven o’clock much commerce would be finished for the day. 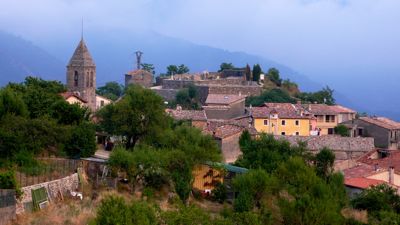 Mac and I arrived at the hotel about 7:30, surprised to find that it was empty. It was in fact not a hotel at all but a vacation apartment building, renting out complete apartments, with kitchens and all, by the week. We’d get an apartment for the week, but there was no restaurant, and there was nothing in town. My 1985 French encyclopedia tells me the population of Utelle is 398; Wikipedia raises that figure (as of 1999) to 488. Clearly the city could house more, though probably not support them.
The hotel guy, or apartment super, or whatever he was, rustled up some food for us: three orders of salmon steak; three rissoles (molded rice side dishes); three crèmes caramels; a bottle or two of rosé. There was a microwave oven in our kitchen, so we made do. There was also a balcony looking out toward the south, toward Nice. We relaxed after our showers and dinner, talking about the walk, making plans for Nice, a day or two away.