Day 37: July 26, 2008 (walkday 33)
OUR GUIDEBOOK TOLD US today’s route would require improvisation. We were a four-hour walk from the town of Levens, where we might stay the night. Three hours further was Aspremont, another overnight possibility. Three hours beyond Aspremont would find us in Nice, the goal. (The original goal had been Menton, but that would have required 24 additional hours walking, and the choice between the two alternatives had been made yesterday, in St.-Dalmas-Valdeblore.) 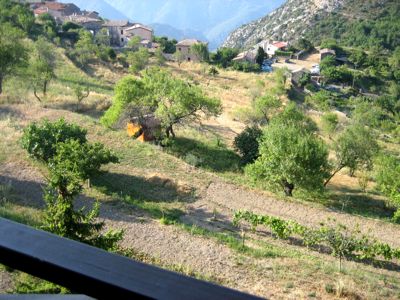 View from the balcony, Utelle (photo: Mac Marshall)
All this walking would be relatively flat, never reaching above 800 meters — Utelle, where we’d spent the night, was the highest point; and while there was a climb into Levens it didn’t look serious. So we took it easy this morning, taking photos from our balcony and lazing over breakfast on the terrace. 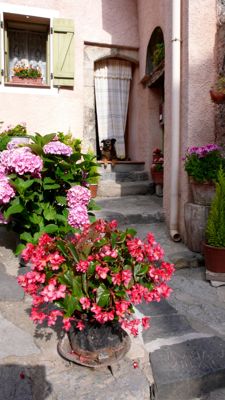 We didn’t leave our apartment until 9:30; and even then we lazed through Utelle, a town that might have detained us more if it had been a little busier. We went to the tourist office, where we heard about the Roman inscription on someone’s doorstep — a doorstep well guarded by an attentive dog — and we bought provisions for lunch, knowing the day would be hot and dry. 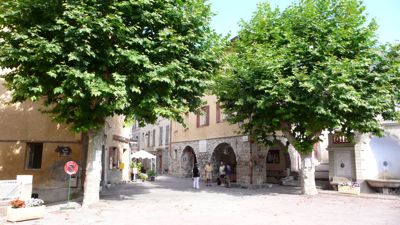 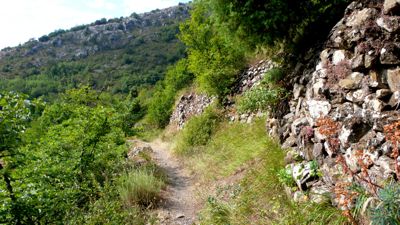 Then we turned west, dropping to the Rio valley, crossing it on a footpath, and climbed sharply up before dropping again to the Cros valley. In a little over an hour we reached Chapelle St.-Antoine. 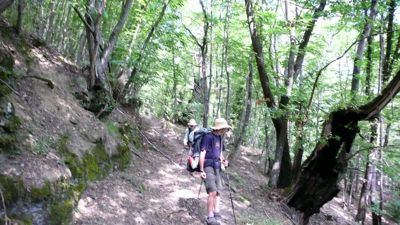 Much of the walk down was through terrain apparently abandoned from agricultural use scores of years ago. The path often ran alongside ancient moss-covered stone walls, within forest perhaps surviving ancient nut groves. It then continued to drop, crossing highway D67 by hairpins on the footpath, arriving finally at the day’s lowest point, to cross both the Vesubie river and highway D2565 at Cos dUtelle: we were only 195 meters (640 feet) above sea level! 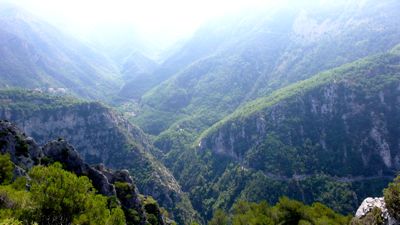 We took only fifteen minutes to eat our lunch in a miserable spot, a bus-stop kiosk that gave a little shade: there was no café, no bar. It was so hot and oppressive that we didn’t even think to take any photographs. The constant sound of cicadas and the hot close air were fatiguing. 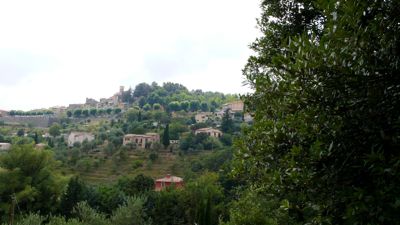 An hour later, though, we climbed along the paved road, past a dump site, into the town of Levens, where we planned to spend the night. It was quarter to two and the tourist office was closed, so we decided on lunch in the center of town, reached by climbing up a long flight of steps, past one closed restaurant after another. (In truth I was self-conscious of our appearance, too: Levens seemed an upscale town, and we were hot, dirty, and sweaty.) 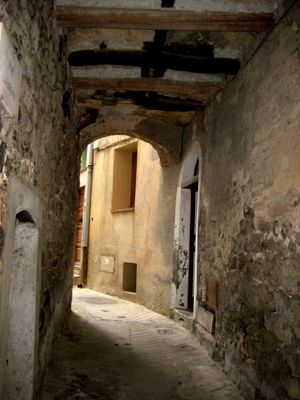 (photo: Mac Marshall)
Lunch was a delicious salad and a glass of rosé on the terrace of a café on the main intersection, with a marriage procession to entertain us. We had plenty of time to kill: the tourist office didn’t open until past three. And then and there we discovered it was true, there wasn’t a bed to be had in Levens, or in the next town, Apremont, or anywhere else in the vicinity. There was a huge horse show going on, for one thing; it was summer, for another.
There was nothing to be done but wait another hour or so and then take the bus to Nice, where we knew an apartment was waiting for our use. We arrived about seven, were met at the bus station, and whisked to our flat, airy and newly painted and very convienently located, a couple of blocks from that elusive Mediterranean.