Up early this morning, six o’clock, and out to look at the morning. As I wrote some years ago:

Already in my shorts, I rise
To verify the morning skies 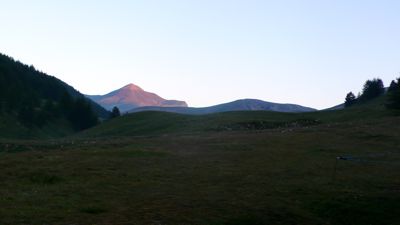 (though in fact I did not, do not, sleep in underwear, not that you care). 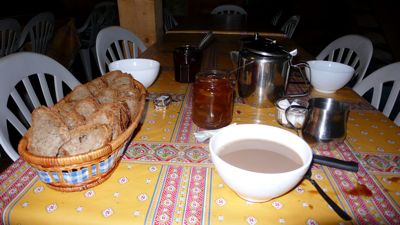 The morning was delicious: pink light on the distant Mont Démant; cows coming in to be milked at the vacherie. I had time to look at today’s étape in the guidebook: it will be a long day, taking us to the lowest elevation we’ll have seen since we left Lake Geneva. At seven, the usual breakfast: bread, butter, café au lait, with nice homemade jam at this refuge. 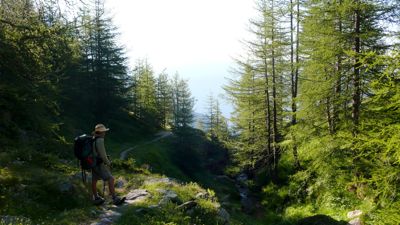 Then, a few minutes past eight, out into the day, another clear one promising warm weather. We walked down the Longon valley, continuing the pleasant walk that had ended yesterday’s stage. We passed the ruins of the vacherie that had preceded last night’s refuge: it had been destroyed by an avalanche, a reminder that these peaceful pastures have a very different personality in winter. 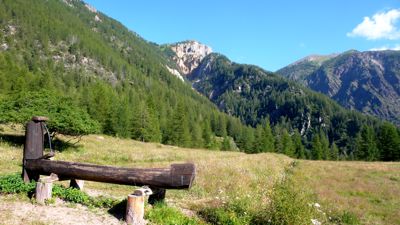 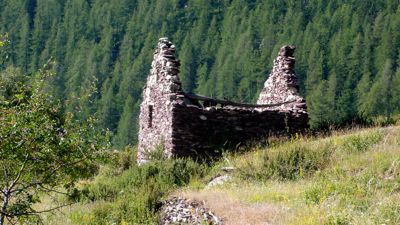 In an hour we’d dropped 400 meters and arrived at Rouglos, where a trough suggested we take a break, and a roofless refuge made me think again of the weight of accumulated snows. Then it was on again down a country road, practicising our French R’s with Rrrrourrre and Rrrouglos. We were traversing for the most part, crossing little streams from time to time, walking through the Fracha forest, ultimately reaching the paved road D130, banked with red stone, skirting an arboretum I wished we’d had time to visit, down toward the village of Roure, a pretty town improbably holding a steep hillside. 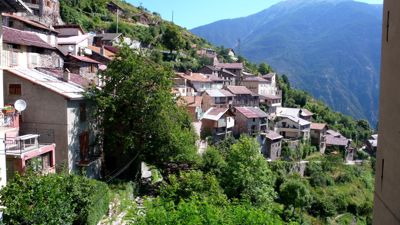 GR5 became a footpath skirting houses and walled gardens, often with lavender, figs, and fruit trees reminding us that we were considerably lower: Roure is at 1100 meters. We peeked into a small chapel, 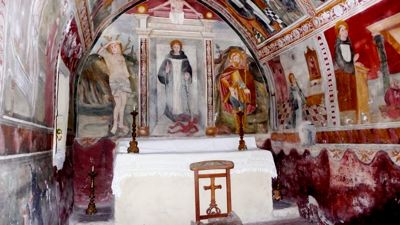 then continued into town looking for a café, finding it, enjoying a pot of tea.
And then it was time for a serious descent, down 600 meters in an hour and a half to the banks of the Tinée, where a real restaurant provided a lunch stop across the street from a handsome old building, formerly the fish-hatchery, now converted to some other use... 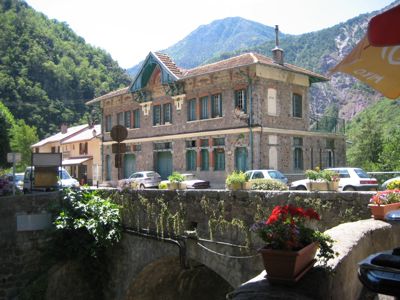 photo: Mac Marshall
Leaving St.-Sauveur-sur-Tinée we took one of our false turns and had to retrace a kilometer or so along the paved road, finally finding a GR5 blaze just a few meters from the restaurant where we’d lunched. From there it was a climb, and I found myself often confused by the terrain, the direction, even the light. After all those days in the mountains we were now walking in quite different country, and the local economy was clearly different; herding and farming had given way to some kind of urban-based economy; houses were more frequent but apparently either for weekend and vacation leisure use or shelter from a commute-enabled occupation in town. 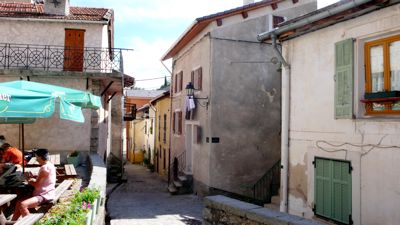 There was Rimplas, for example, where we stopped for a mineral water on the terrace of the town grocery-cum-café. Another hill town, rather like an Italian hill town in Liguria, say, Rimplas seemed utterly deserted on this warm late afternoon. We saw a few old people, people my age I mean; no children, no workers. 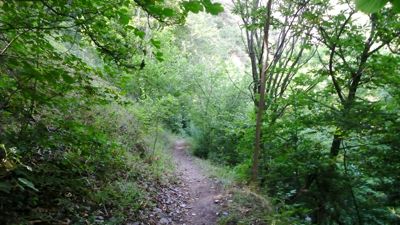 We took to the trail again, descending gently now to the hamlet of La Bolline, and then walked rather a disagreeable stretch, often alongside paved roads, through what seemed to be suburbs of Saint-Dalmas-Valdeblore. On and on the road took us, past fenced-off yards surrounding vacation homes and condos, until finally we came to the old village itself, considerably higher than the newer one down in the valley. 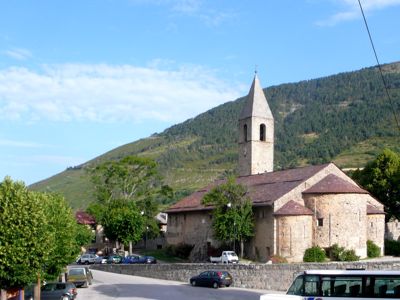 A fine old romanesque church from the 11th century stood at the upper end of town, close to our gîte d’étape, “Les Marmottes” — that and Les Glaciers were the names of perhaps a quarter of the places we’ve slept in this last five weeks.
Here, since we're nearing Nice, we were served a good dinner, good and somewhat nissard: a cheese feuilleté, a salt-water fish called colin unfamiliar to me, white rice with pistou, and a green salad. We had a room to ourselves here, shower and toilet down the hall, and slept well. 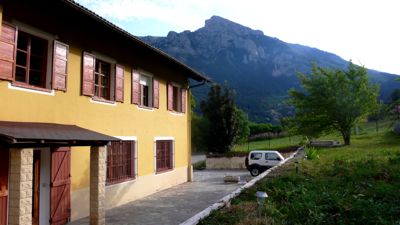