Beginning with the walk of July 14, additional photos from our walk across the Alps can be found here
Day 31: July 20, 2008

Breakfast a little after seven; out the door at eight, on an overcast but warm morning. Fouillouse wasn't much of a town, and we didn't linger. 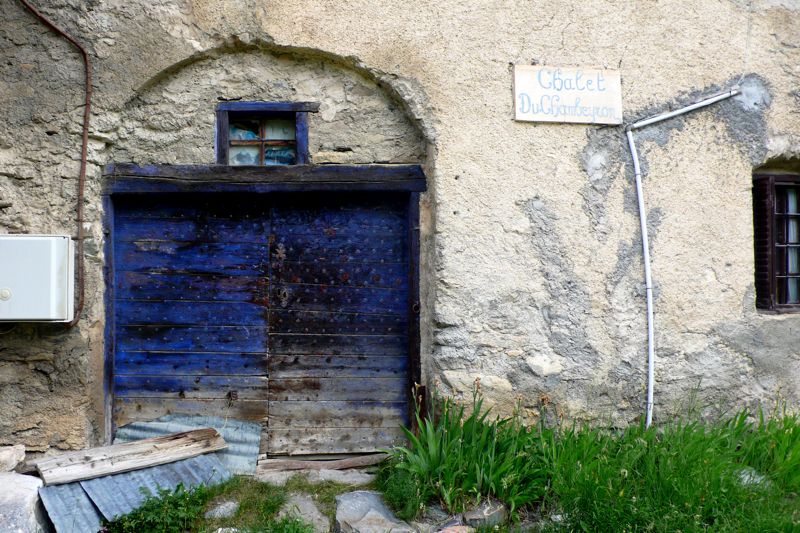 I admired the doorways, many painted alarming indigos and deep violets; and the statuary, odd knicknacks in improbable settings, and a charming little St. Mary in a wayside shrine not much bigger than a postbox; and then we hit the road past the chapel out of town. 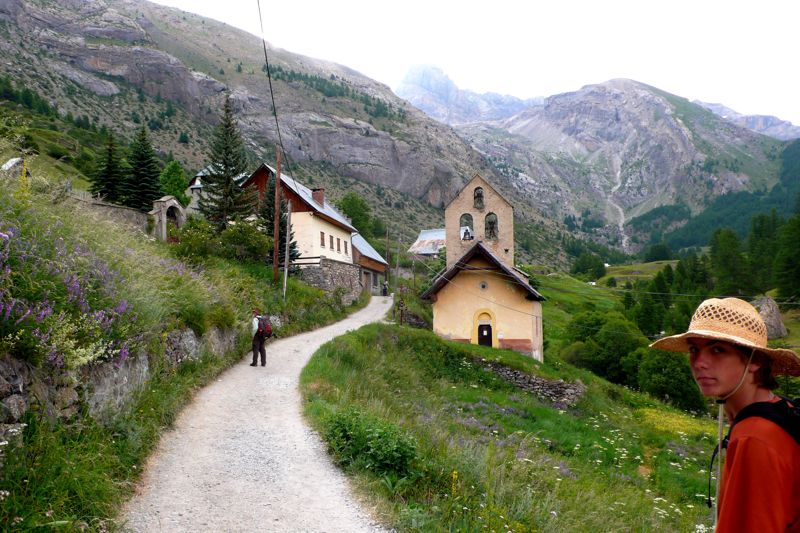 In twenty minutes we were well away from civilization; it was raining; we put on our raingear and covered our packs. The track took us up a fairly broad valley, southeasterly, larch forest and open pastures alternating, just as did sunshine and shadow. 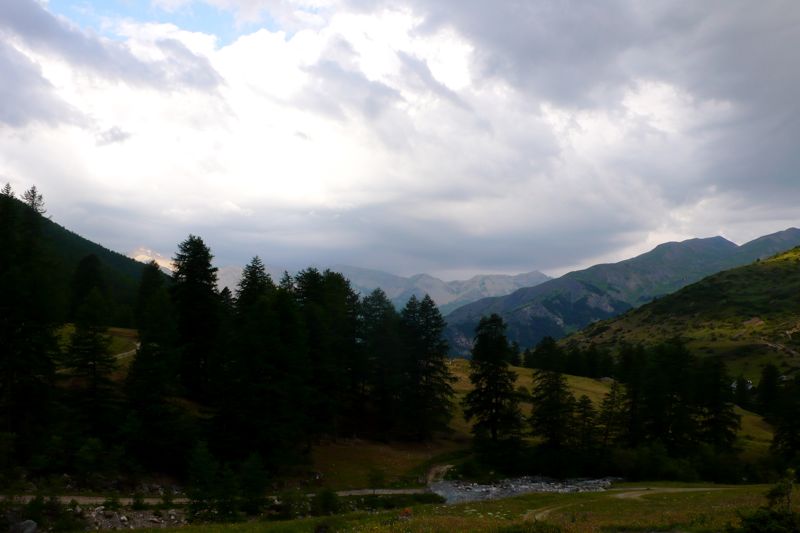 We climbed steadily, easily, as the valley broadened and left the forest behind, climbing above them; in a little over two hours we were at the first col of the day, the col du Vallonet, unremarkable; 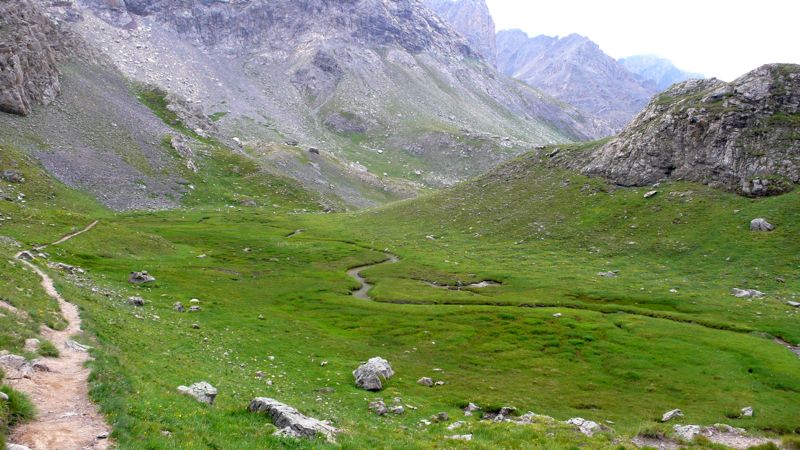 and then, past the crusty Rocher Piroulire, we began climbing again, past the imposing ruins of the Laraquements de Viraysse, part of the fortifications erected after World War I. Henry and I investigate these ruins, going inside the gate and into the parade ground. 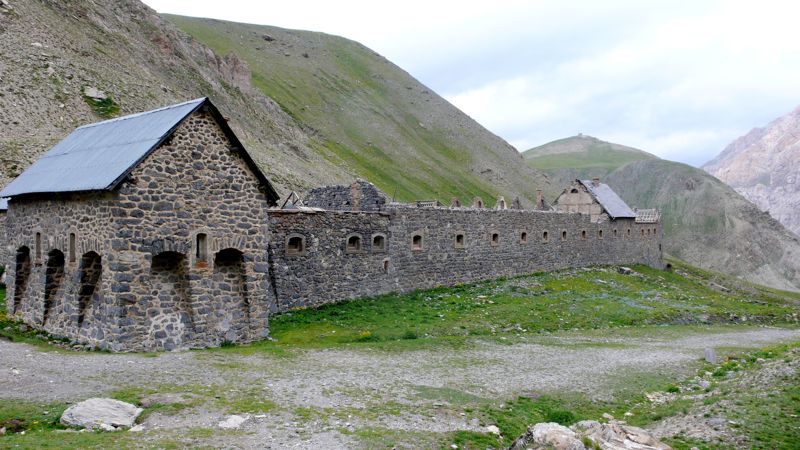 One building retains its roof; in really bad weather one could easily ride out a storm here. 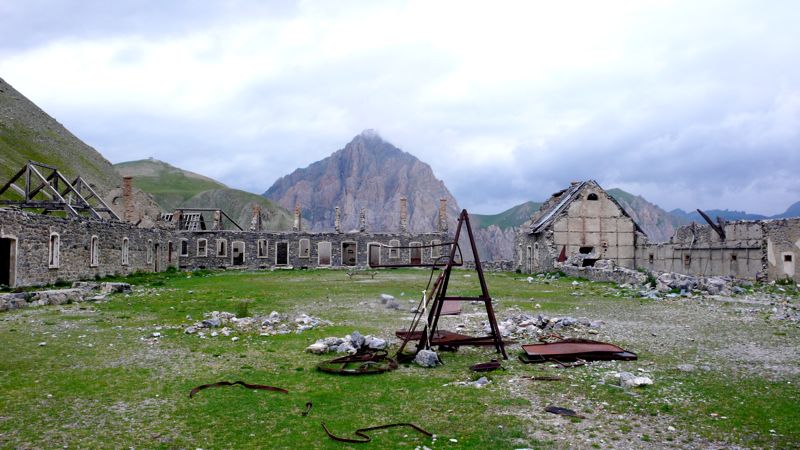 Otherwise the buildings were crumbling back into the rock from which they'd originally risen; a familiar air of futility presides over these ruined fortifications, as useless as the wars they so ineffectively guard against. 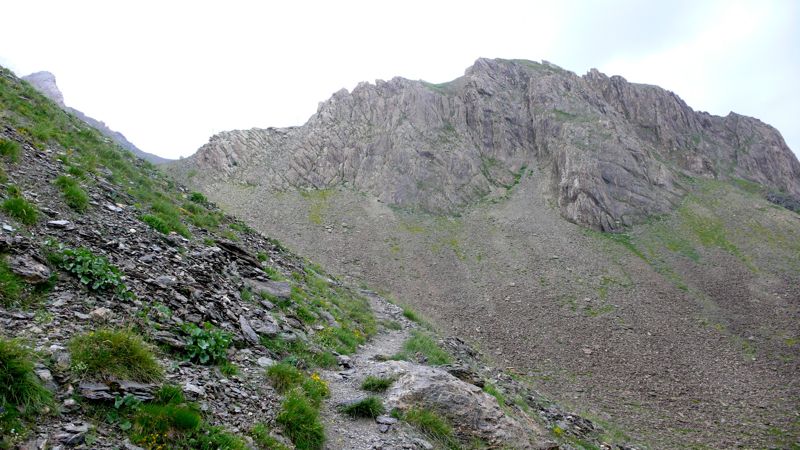 From here we climbed harder, up hairpins, to the col de Mallemort, at 2550 meters the high point of the day; and then we dropped into a valley bigger than we'd originally though, the village of Larche far below us. It began to rain again; I was glad I had my umbrella. 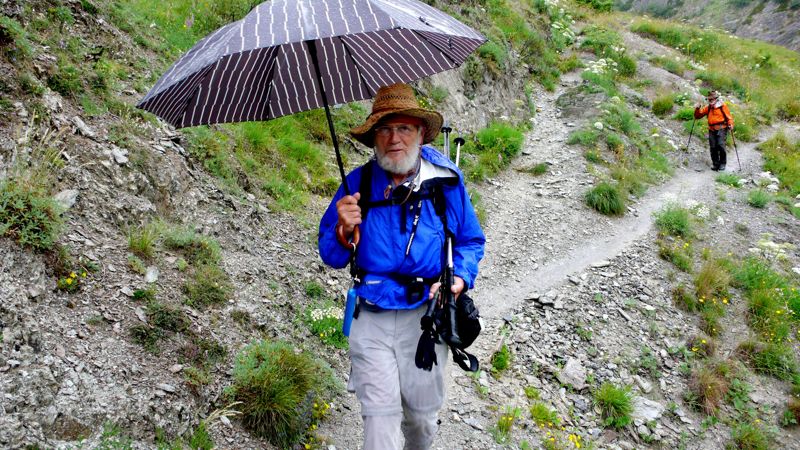 photo: Henry Shere
It rained as we entered town, and not knowing where our gîte was we ducked into the first bar we came to. It turned out to be next door, of course, across a little bridge, and we checked in early, into the least promising-looking stop of our entire trip so far. 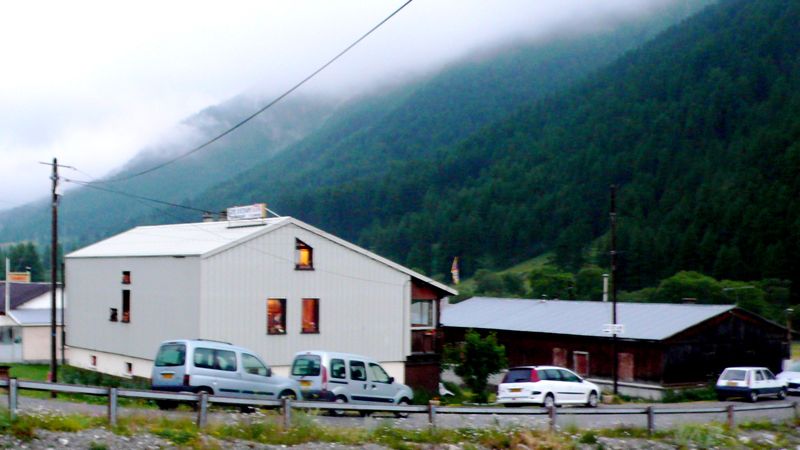 Larche was completely destroyed during World War II, and its rebuilding has been more pragmatic than attractive. It stands on an important pass leading to Piemonte, toward Cuneo; one of these days I'll have to explore this area further. For the present we were content with a visit to the Bureau de Tourisme, where the lone attendant, laconic and probably bored, sat in the dark, "conserving electricity" as he pointed out when I commented on it, assured us that we'd have trouble finding accommodations down the road.
Distance walked, day 31: ca. 20 kilometers (12 miles) • Time: 6 hours • dénivelement: ca. 1900 meters (6200 feet)
Additional photos from our walk across the Alps can be found here

all photos cs except as as noted
Posted by Charles Shere at 10:53 PM