This second day started well, proved difficult later, ended oddly, at least in my experience. I rose at six to do some writing and thinking; no one stirred; even the parrot was relatively sedate. At seven, though, we were served a hearty breakfast: the usual croissant, sliced baguette, and coffee au lait, plus orange juice and, later, two fried eggs and big rashers of ham. We went then down into Bernex, following first a paved road, then a grassy and stony mulepath. 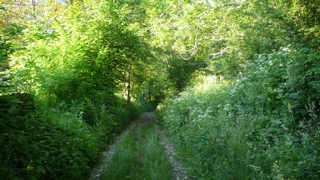 We had to wait only five minutes or so for the village store to open, where we found some dry sausage sticks, apples, and peanuts for the day's lunch, and a bottle of water for me.
Across the street the tourist shop was open, but their only hats were heavy winter felt affairs and one straw sized, I think, for Charlie McCarthy; so I bought some sunscreen and let it go at that. 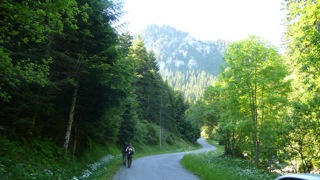 We walked up the asphalt road, infrequently traveled, to Trossy and beyond, finally arriving at the curiously named Fetiuère where the cafe would open in an hour, at eleven; but the manager saw our disappointment and gave us three coffees and welcome chairs on the terrace — gratis!

Then began the real day's walk. At first we were in a forest, and the way was packed earth, occasionally a bit muddy, over loose stones. Quickly this led to a harder way, crossing the contours and climbing sharply, many more loose stones but still shaded. Then we heard sheepbells ahead, and dogs barking, and came upon a small flock just moved into a paddock within temporary electric fence and guarded by two nervous sheepdogs. Now we were in full sunlight, and remained so generally for the rest of the day — a warm one. The way continued to climb but began to alternate between climbs and contours, rising above the forest and leading into high pastures with here and there a small herd of heifers, finally to a promising fromagère, an ancient stone building where cheese was made — closed, of course, the tables and chairs fenced off in a most unfriendly manner, and a prominent sign
Le maison n'a pas des toilettes
Voir la Dame Nature

There was however a long concrete trough with two jets of cold water streaming into it, and here we rinsed our hands and soaked our head-scarfs and rested. 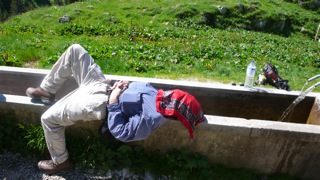 Now we were joined by a number of other walkers, solitaries, couples, and two or three families with children. The path splits here at the Chalet d'Oche, and we took the left, climbing through high pasture on a steep stony trail with many switchbacks — difficult climbing. 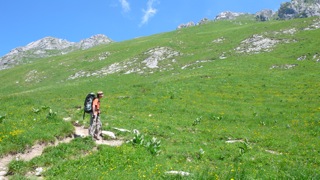 Always we wondered how we would come to the day's goal, the Refuge du Dent d'Oche, always out of sight the other side of a prominent rock outcropping, and up at 2114 meters elevation. Would we round that outcropping on the left or the right? 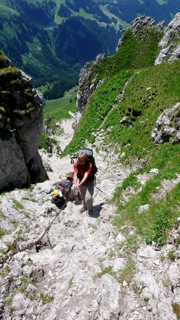 Neither, it turned out; there is a narrow way, a sort of chimney, in a cleft; and here we no longer walked, we scrambled, often hauling ourselves up hand over hand with the help of chains and cables thoughtfully pinned to the rock.
It was exhausting, but it led to a magnificently placed refuge, its small patio providing views over the whole of Lac Leman and the Alps, Mont Blanc a challenging distant mysterious white presence beyond all. 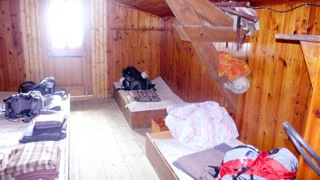 The Refuge accommodates sixty guests in three dortoirs, big common rooms with box-beds, really only thin mattresses on the floors, set side by side in rows. There's one toilet, a Turkish affair; you hang onto a rope with your left hand to steady yourself and keep he door closed in front of you as you do your business. There is no running water, though a bucket of cold water is thoughtfully provided just outside the toilet door for rinsing one's hands. Otherwise there is no way to clean up here. 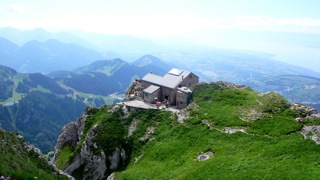 The refuge is supplied by weekly helicopter drops of heavy items — beer, wine, water, and such. The gardien, who we met back in Trossy, brings bread up every day or two on his back, climbing the same route we’d just taken — and going back down that chimney to fetch his German shepherd, now too old to make the climb unaided. 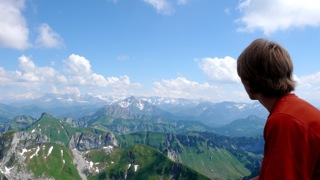 But the view is splendid. Henry and I climbed to the summit, maybe twenty minutes away, and found a young bouquetin there, grazing quite near the handful of visitors who seemed stunned and silenced by the view — and inspiring it certainly is. 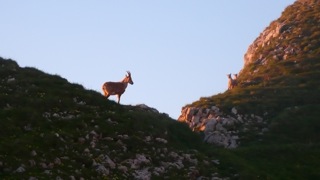 Dinner was soup, pasta, slabs of roast beef, cheese, and canned fruit cocktail, with a glass of red wine and many of cold water. And then, a little before ten, I retired, to sleep pretty well. 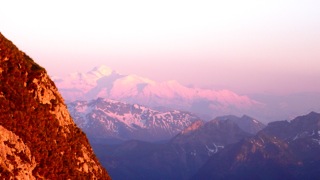