APART FROM THE WALK to Dent d'Oche on day 2, this was the most strenuous day yet, in spite of a deceptively pleasant stroll at the beginning. 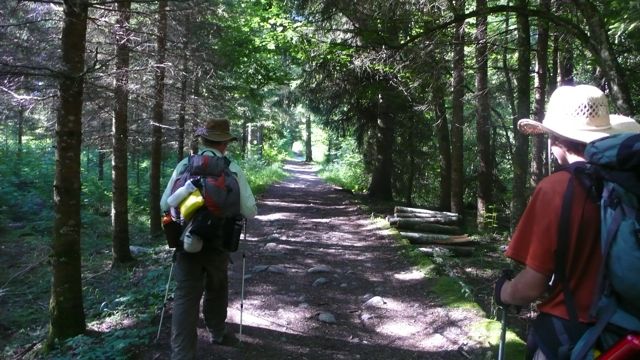 We left Samoëns after a hotel-buffet breakfast of eggs and granola — better not get used to that! — about 8:30, walking alongside the Clévieux, rather a broad, easy-going stream, alongside a recreational park. When we came to the faster, fuller Giffre, though, we unaccountably turned right instead of left, walking a couple of kilometers out of our way, passing a couple of middle-aged locals with an ugly dog in both directions: they must have wondered why three men with backpacks were out for a morning stroll!

Finally we got straightend out and strolled in fact along a country road up the Giffre valley, finally coming to the gorge which was the glacial-age bed of the Giffre, a startling stony canyon. This was perhaps the most spectacular closed scenery of the Long Walk to date, mute and ancient, far from anything humanly commercial or industrious. Our pace slowed because of the stony terrain and the climb, but even more, I think, because of the looming walls, the stillness, the sense of huge spans of time. Places like this have a hypnotic effect; they always seem like gateways to a past which, however remote, feels intimately connected to one's true center of being. 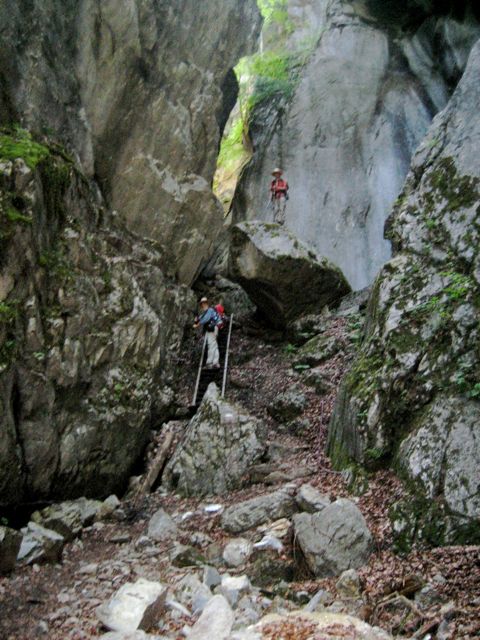 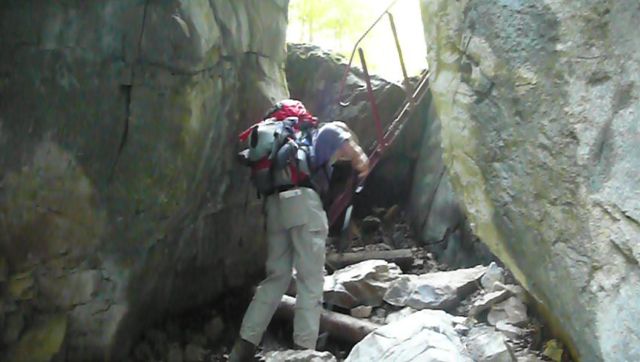 At its upper end the gorge is closed by solid rock cliffs made passable by a series of cables and steel staircase-ladders. On climbing the last of these we came out into a peaceful forested valley, broader, perched high above the present course of the Giffre very far below. Here ancient nature ignorant of humanity gives way to agriculture; the valley is set about with farm buildings and the fields are beautifully grazed, while above the dents and pics and falaises testify to the glacial activity that left these pastures behind. 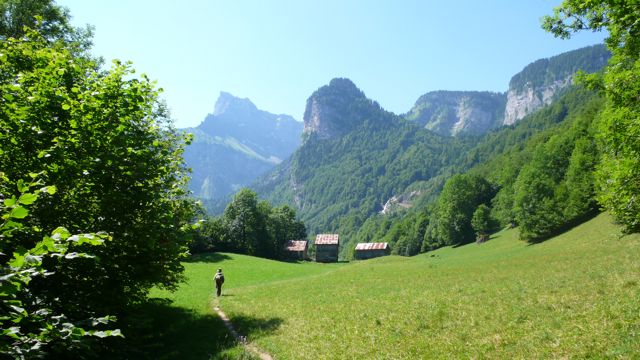 We took a break to reflect on these matters and more especially to eat our apples, then continued: we had a long climb ahead. We hesitated at the cascade du Rouget, then plunged into forest on a difficult stony trail on which we ultimately lost our way for a while, improvising an emergence 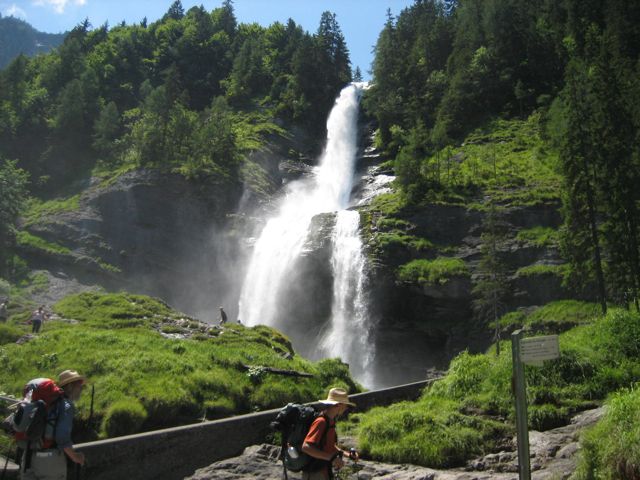 photo: Mac Marshall
to an even more spectacular set of waterfalls, a national monument with an accompanying café where we rest for an hour with crèpes and salads.
The weather was threatening, though, and we had more distance to cover, and there was snow on the ground ahead, at the collet d'Anterne. 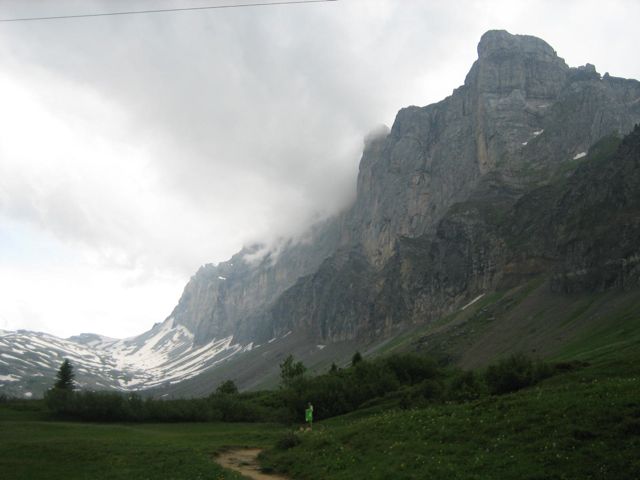 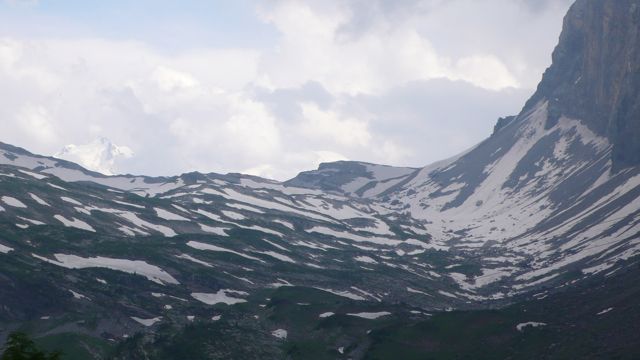 By the time we reached this ridge it was raining hard: time to cover the packs, then ourselves. In two hours, though, we reached our goal: the rain had let up; the pastures were incandescently green; sheep grazed the hillsides, and the low Chalets d'Anterne were ahead of us. 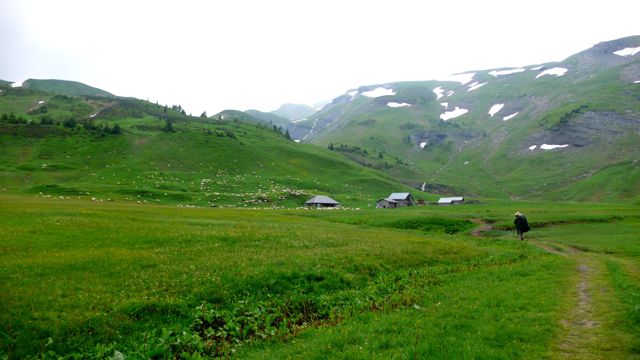 We stayed at the Refuge Alfred Wills, which occupies the house that pioneering alpinist built for his home in the 19th century. Here we joined a few French randonneurs for a delicious nettle soup and… what? the only main course we've failed to recall: we must have been tired. 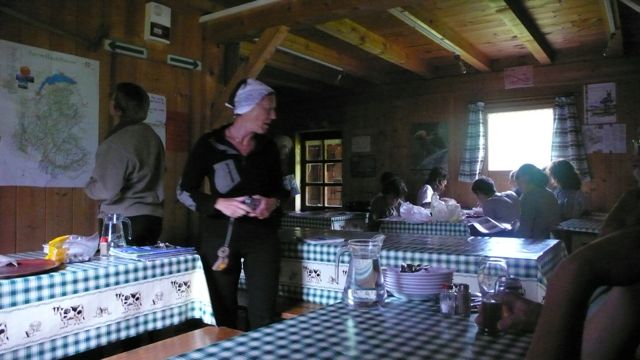 We were early to bed. 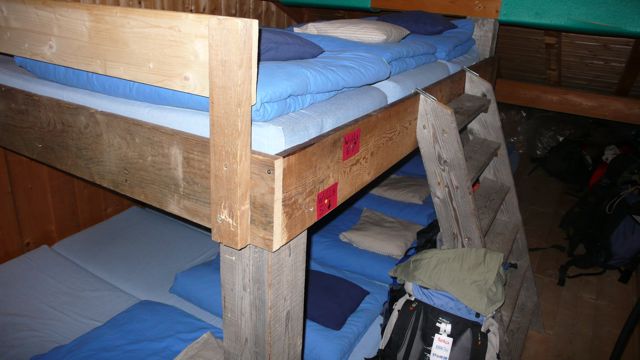 all photos cs except where noted
Posted by Charles Shere at 11:14 AM