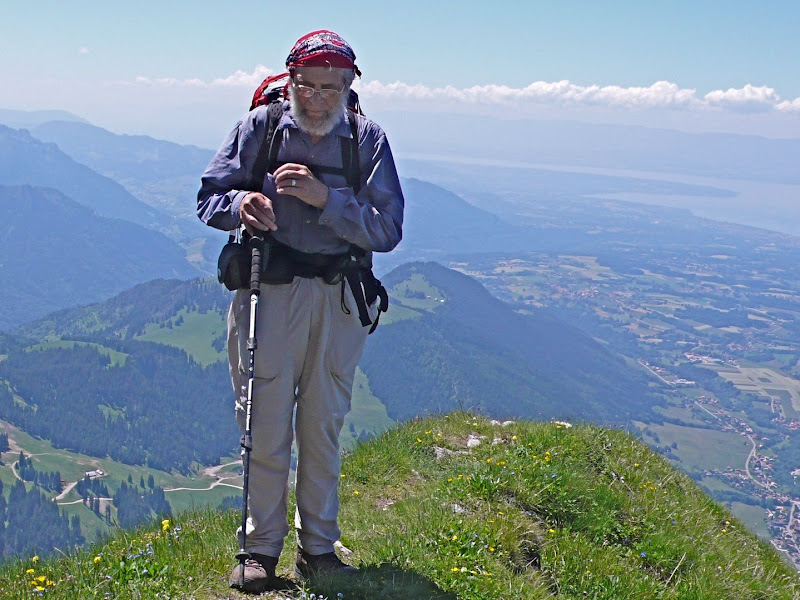 TWO DAYS BEFORE my seventy-third birthday I finally begin the account of our Long Walk of this summer. We flew, my grandson Henry and my friend Mac and I, into Geneva on June 20, landing about 10 am after marveling at the landscape out the airplane window: were we actually going to walk across those mountains? Well, no, the GR5 takes us over ridges along the foot of the Alps. Still: pretty daunting.

Grande Randonnée 5 runs from Hoek van Holland, on the Dutch North Sea coast, to Nice, on the Mediterranean. I first read about it years ago in Walking Europe Top to Bottom, by Susanna Margolis, who walked the entire GR5 with her companion Ginger Harrison in the 1980s: Lindsey and I immediately decided to do the same, but starting further north in order to ease into it.
That led us to investigating the Pieterpad, a 400-kilometer traversal of the Netherlands: We took three summers to do it, but that's another story, one still waiting to be documented. (A more recent Dutch walk along the Lingepad has resulted in a photo book.)
A more recent book, Paddy Dillon's The GR5 Trail, brought information closer to date and further inspired me with its photos, so even though Lindsey refused to try it, pleading uncertainty with the terrain, I determined to give it a try. I told all my friends I was doing it, so I couldn't back out. I joined a gym and walked its treadmills, so I'd invested too much in it to back out. And I invited Henry and Mac, and wasn't about to let them down.
It's going to be so much fun, I reminded them continuously through the months leading up to the walk. And, in the end, it was. It was strenuous and at times monotonous. But it was memorable, stimulating, invigorating, and always incredibly beautiful. In the next days I'll try to re-live the walk day by day.
Posted by Charles Shere at 11:05 AM