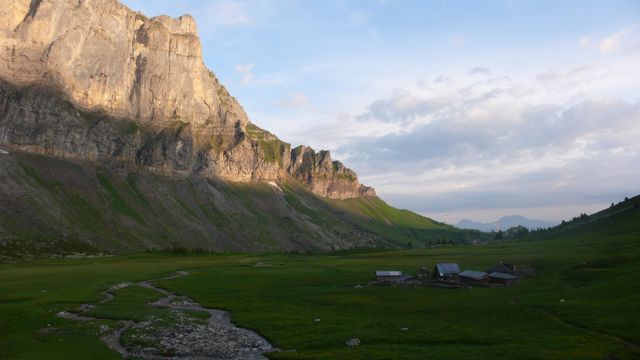 But it began very gently: I woke early, awakened by shepherds incomprehensibly rallying their dogs to move the sheep; and at six we had a very early breakfast, having made arrangements the previous evening: black coffee out of a thermos, cold milk, bread, good cherry jam, and a cake of some kind. We were joined by the three French we'd met the previous day, one of whom turned out to be Swedish. 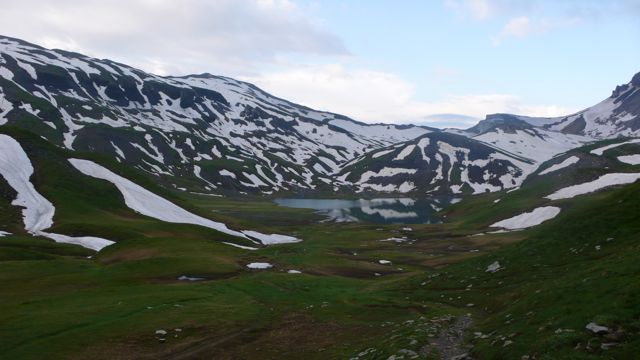 We left the refuge at 6:37 (!), walking up through alpage toward the Col d'Anterne, crossing a few snowfields; in an hour we'd reached Lac d'Anterne, small but beautiful. From there it was another hour to the Col, elevation 2257 m. (7300 feet) at 8.30 am on fine morning - nearly 2 hours of ascent, 1-1/2 by the book: but we'd rested occasionally en route. 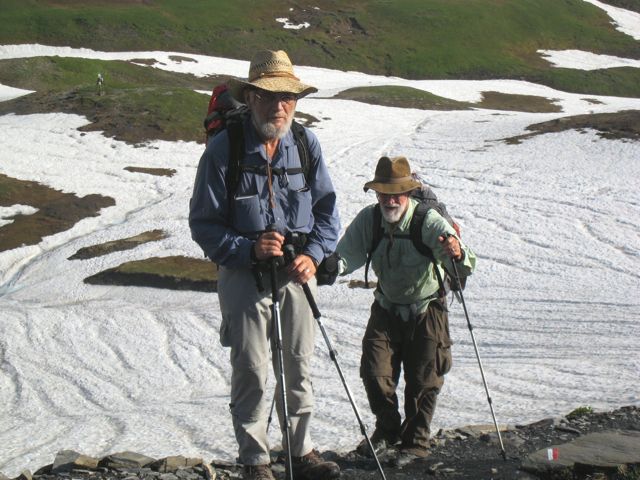 photo: Annie Autier
Our french friends had beat us to the col, and Annie photographed us as we arrived — she explained that when she saw me, "There's my husband, in twenty years," she thought. He'll have to grow a beard. 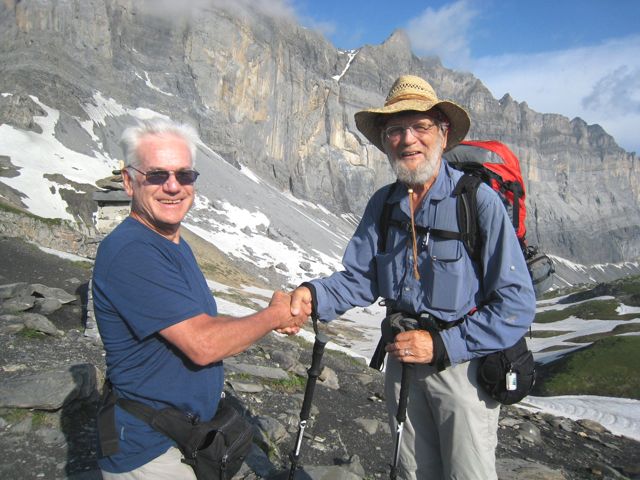 We rested at the Col a bit, but it was soon time to get on. We descended, again across snow at times — and I fell twice — but also across fields of rhododenrons, often seeing cascades nearby. 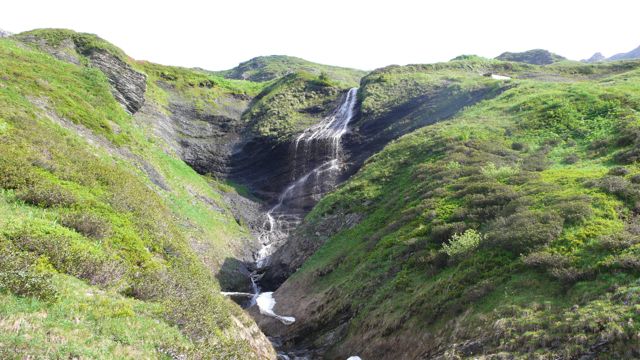 We found the French again at the Refuge de Moëde, forty minutes later, where we had coffee and a Twinkie-like (though not filled) cake, something like the one we'd had at breakfast. A regional specialty, perhaps. Here we rested a good half hour: then down a steep, often wet stony trail to Pont d'Arlevé, v. picturesque, bottom of steep-sided valley. Another rest: it felt good to lie on cool stone in the warm sun. 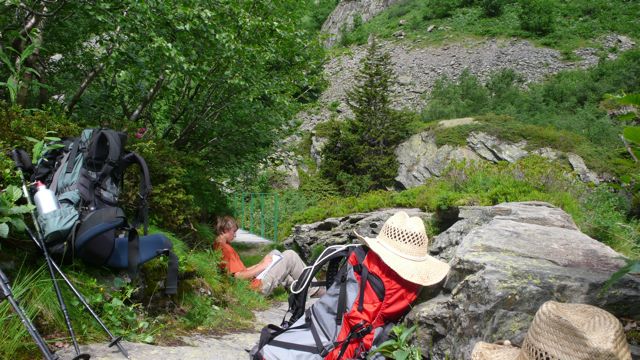 Concerned about us, our French friends had waited for us at the Pont. After a 20-minute rest we followed them on a very difficult climb to the Col du Brévent, at 2370 m. the highest point we'd reached so far. The French had already left; in their place we found a troop of french walkers with their guide, doing the Tour des Dents. 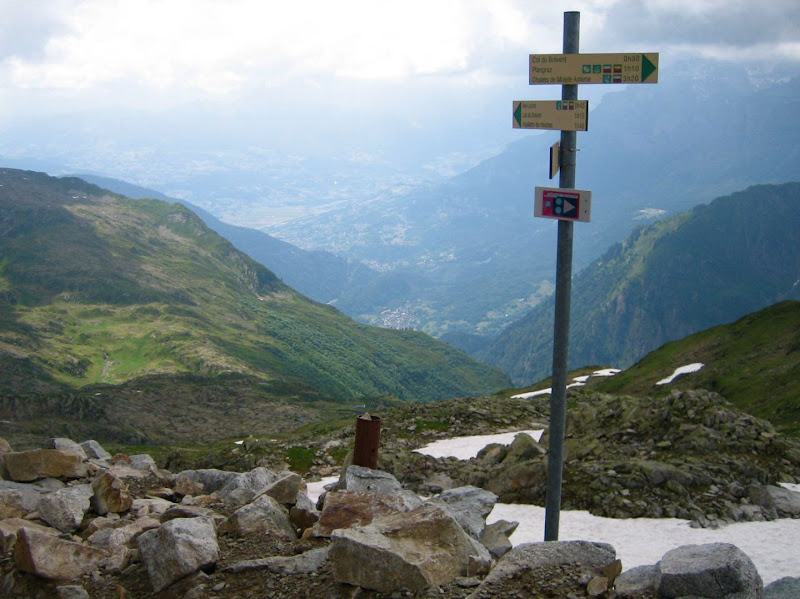 photo: Mac Marshall
It was cold and windy, and already 3.10 — we were three hours behind the book, and had no certain place to sleep tonight. On, then; down, then, to the Refuge at Bel Lachat, where that troop & our French friends were staying: but there was no room for us. We rested half an hour, then left (to applause from the French for les Californiens!) and took the long, hard, stony descent toward the next programmed stop, Les Houches, a village on the southern outskirts of Chamonix. 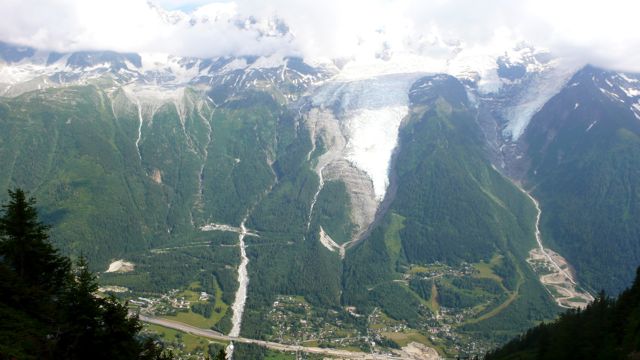 Mont Blanc beyond Chamonix, a long way down

We turned off the route, though, at the Merlat animal park, arriving about 6.30. The park was just closing. The taxi phone number in my guidebook was unproductive. We walked down to a parking lot, where a local was reading a magazine in his parked car: he was sympathetic, but unable to help. Then a ramshackle van drove up filled with sound equipment and three young guys from Liverpool. They drove us further down to a main road, the Route de Coupeau; then we walked — downhill, bien sûr! —to a gîte. Our bad luck held: it was not yet open: but they called a cab & we drove in to Chamonix, to a newish, cheapish hotel the cabbie recommended, the Auberge du Manoir. Shower, change, and walk into town for dinner: salad Niçoise, with potatoes; and then back to the hotel and to sleep at 10.30 or 11. 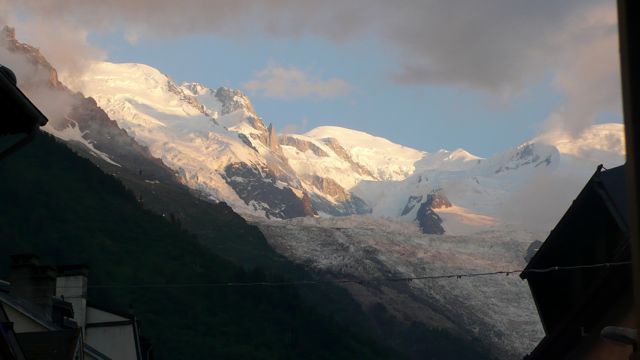 all photos cs except where noted
Posted by Charles Shere at 10:52 AM