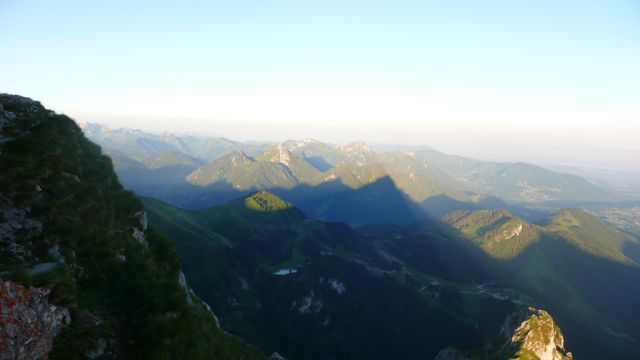 But it was a harder day than I anticipated. Up about five to see the dawn and take photos, then write with a first coffee — black, in a bowl, with sugar, okay. Then, at seven, our real breakfast: cafe au lait, bread butter and jam. Not very nourishing for the kind of thing we're doing. 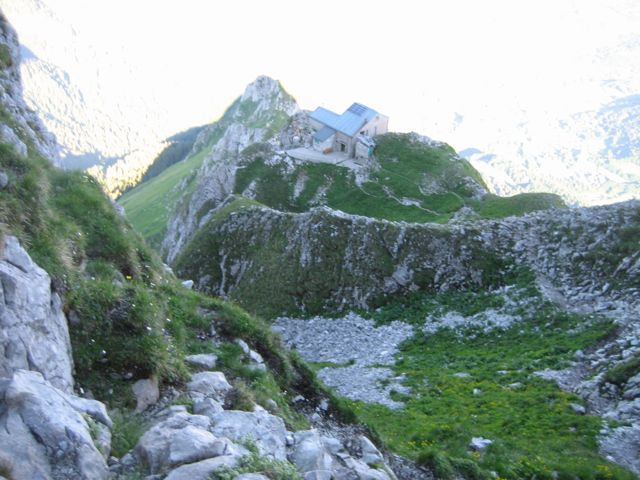 We packed up and set out, climbing to the summit of the Dent d'Oche fairly easily, then descending along narrow fairly level footpaths at the edge of the precipice — the north side of the Dent being virtually vertical — then rounding the top to descend along an arrete, a spine of small-to-midsize exposed rock falling away on each side quite steeply.
A ridge, in fact, descending southeasterly, at say thirty degrees. Often we were helped by cables attached to the rock: you give up using your walking sticks, hold them both in one hand, grab the cable with the other (left in this case), swing away from the rock to the next footing, then quickly slide your hand further along the cable for the next operation. 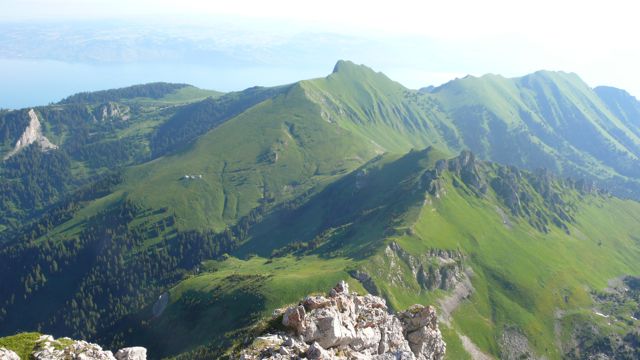 This is fairly exhausting, but more normal descent, on scree, cobbles, and occasionally exposed soil, often stepping down six to ten inches at a step, is tiring in another way. Yesterday I was concerned about Mac; today about myself. Quadriceps and knees complained bitterly as we stepped down hundreds of meters on frustrating switchbacks, and then we were faced with another chimney, shinnying up between two stone surfaces, again with a cable to help, only to resume the switchbacks.

Ultimately all this led us to — the GR5, the trail we intend to take south to Nice. First there was a climb of some hundreds of meters up switchbacks like those we'd just descended to a pass which seemed to define a new area: we were leaving the influence of Lac Leman and entering a different kind of Haute Savoie, a kind more like the Chartreuse we know from thirty years ago. 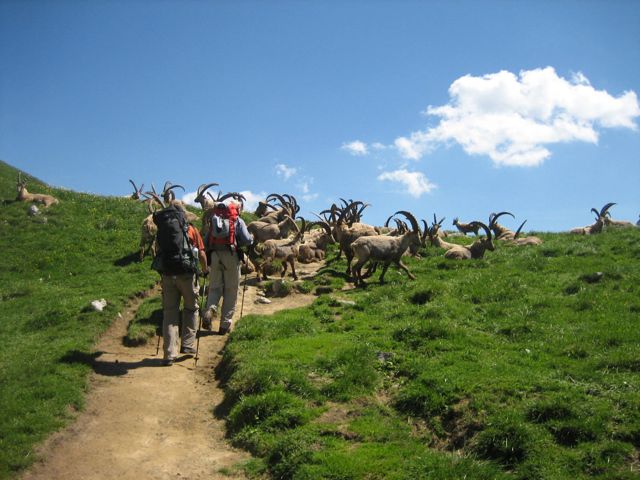 A beautiful green lake beckoned to us down off the path, but visiting it would have required otherwise unnecessary descents and climbs. Didn't take long to decline that invitation. Instead we continued, walking into a herd of at least forty bouquetins, most of them adults with long, elegantly curved horns. I suppose they might have looked menacing, but I just walked forward, parting the herd.

Next came a much gentler descent, but one which took us across occasional patches of snow, unfamiliiar footing to me but rather pleasant. We found our way next up to the Col de Bise, another demarcation, and below us but oh so far away was the day's goal, the Chalets de Bise. 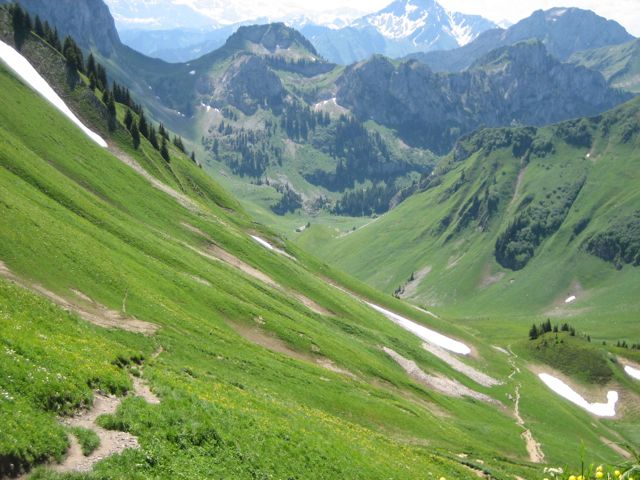 One of the two chalets is a refuge run by the Alpine Club, its sleeping facilities similar to those at Dent d'Oche but less spartan. We were first to arrive so were given three lower bunks at the end of the row, under a window.

We were invited to wash our clothes if we liked, and finally I had an opportunity for a sponge-bath. We washed the clothes in cold water in a trough, leaving a few moss-stains in my pants which in any case now have a good-sized tear on the seat — I must have slid on something unknowingly. 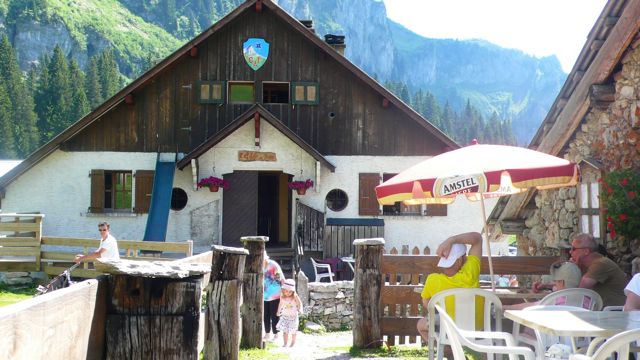 And we had a decent lunch, at two o'clock, a big salad with bacon, egg, walnuts, croutons and of course lettuce, good lettuce; and a bottle of local white wine.

The Canadians, Patrick & Nancy McMahon, arrived shortly after us, in good cheer but just as tired, and joined us for lunch; we'll dine with them in a minute. They're an interesting couple: she works as an ER nurse (and helped Mac out of his muscle cramps, giving him electrolytes); he's a field geologist and knows a lot about mountains. Weather, too: Tonight a storm is promised: good. It'll clear the air. But tomorrow may rain, and we have to walk in it for three hours or so to get to Le Chalet d'Abondance. We'll see how it goes. 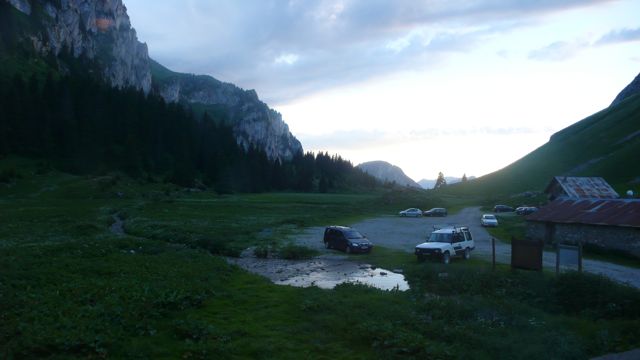