Day 12-13, July 1-2, 2008—
WE SPENT A DAYin Chamonix, resting up, provisioning, and studying the route ahead. I was beginning to worry: we would clearly need to reserve ahead for our night's stays, and in some cases gîtes and refuges were few and far between, not to think of hotels. We'd been on the walk ten days; it was July now; July's as bad as August in France these days as more and more people have summer vacations and more and more non-French vacation in France — and we hadn't covered a quarter of the walk.

First thing after breakfast, then, was a visit to the Tourist Bureau, where we reserved for the next two nights: tomorrow at les Contamines, in the Hotel Grizzli, recommended by an English woman who ran walking tours; next night at the Refuge de la Croix-Bonhomme. Outside the tourist office was a huge chess set, its pieces perhaps three feet high; Henry and I enjoyed a game, then went to lunch — omelette fines herbes for me. 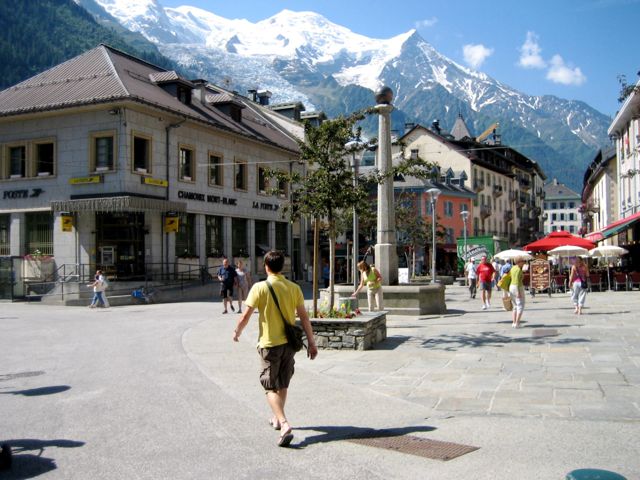 photo: Mac Marshall
In the afternoon we left our clothes at a laundromat, played a game or two of billiards at the hotel, and did a little shopping — a pair of clip-on sunglasses for me: the snow glare had been tiring. Dinner at a very nice Italian restaurant, La Dolce Vita, where I could rattle away in bad Italian with the proprietor, who was pleased that i was pleased with his food, and eager to talk about it. 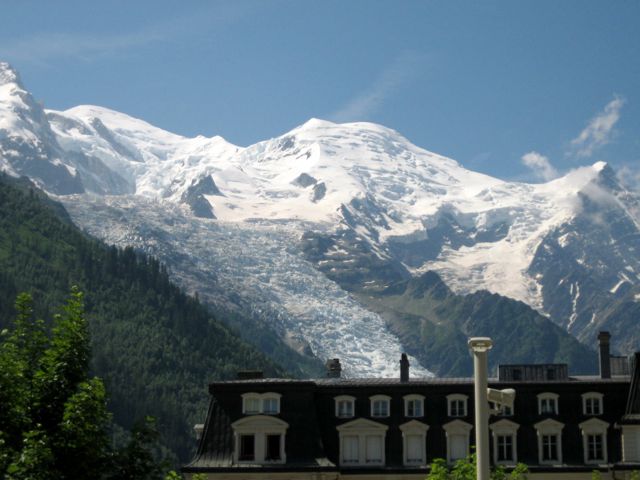 photo: Mac Marshall
Chamonix is not my favorite French mountain town, but it was more interesting, more fun, more cosmopolitan than I remembered from previous visits. The town was full of Indians, for some reason; their saris lent a surreal note of color. And the scenery outside of town — Mont Blanc and its glaciers, and the Col de Brévent we'd conquered the day before —did a lot to make up for the mishmash of architectural style. 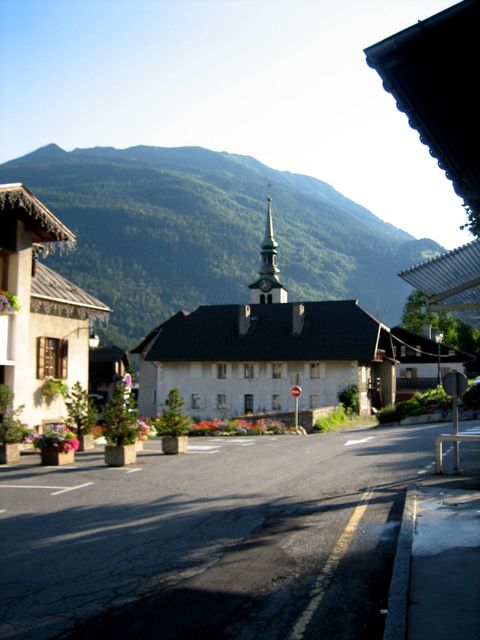 photo: Mac Marshall
Next morning, July 2, we rose early to catch the 8am bus to les Houches, where we would rejoin the GR5. It's not much more than a wide spot on the road, but there we had our café au lait and croissant in the one café open, bought some apples and chocolate, and set off on a very nice walk uphill, alongside a country road, then a ski lift, through forest, past a World War II bunker, past ruins of stone shepherd's refuges. By about 10 am we'd come to a gîte, Hors Piste, where we topped for tea and conversation with the gardien, a nice guy, conversant in Italian and French. We had the place to ourselves, but as we left a bevy of Dutch ramblers looked in, uncertain as to whether the place was open. 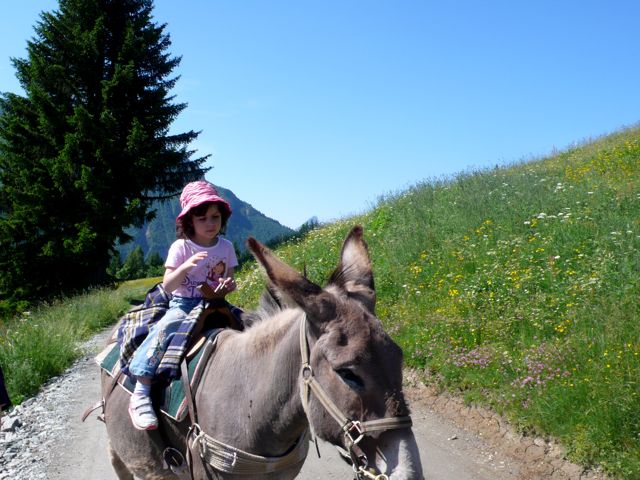 Soon we came to the Col de Voza, the terminus of theski-lift from Les Houches. ("The Girls," as we by now referred to Suzanne Margolis and Ginger Harmon, whose Walking Europe from Top to Bottom (1986: Sierra Club) had inspired me to take this long walk, had taken that ski-lift, one of what we suspected may have been a number of short-cuts they'd resorted to. (Another had been the skilift from Le Brévent down to Chamonix: it was not running the afternoon we'd made that hard descent, two days earlier.) 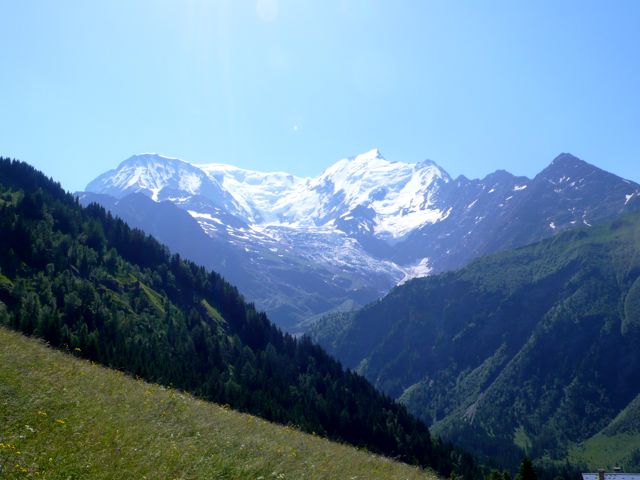 The Col featured a huge hotel, a corral of rental donkeys, and an excursion tram! Lazier folk than we took advantage of these amenities, but we turned away from all that, admired the view ahead of us, and rambled on down to Biomassay, a pretty little hamlet, and at about noon in to the village of Champel, where we found delicious cherries hanging from branches above our path. 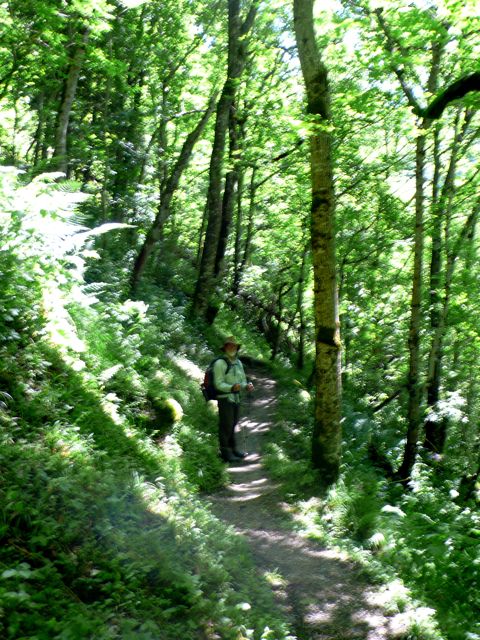 Then came fine walking through forest, and afterward rather a boring walk through vacation villages and the fields separating them. In Gruvaz we admired a fine old school building, where a vacationing couple sunned themselves in the doorway: "How old is the building," I asked; "Aucune idée," came the bored reply. 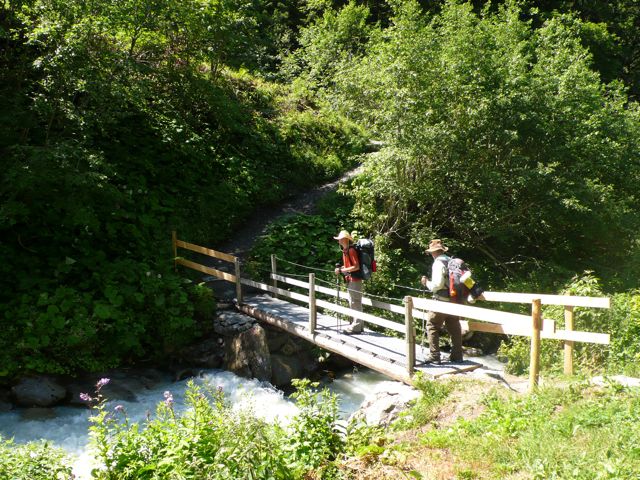 Then suddenly it was hard going down to and back up from the Bonnant (bon nant, good freshet), ultimately to find, at a bench occupied by a sweet old couple, a footpath leading up to Les Contaimnes, where at 3:20 we found the Hotel Grizzli, tourism, a company of Japanese tourists walking the Tour de Mont Blanc, boissons, a mediocre dinner, and a good night's sleep.

all photos cs except where noted
Posted by Charles Shere at 11:03 PM