Day 14, July 3, 2008—
UP AT SIX this morning, though breakfast wouldn't be ready until seven. Just as well, though: soon after we'd got our breakfast from the Grizzli buffet, the breakfast room was invaded by a bevy of Japanese tourists, excitedly discussing the tricky serve-yourself milk-froth machine and generally slowing things down.
By eight we were under way, walking a very nice road bordering the Bonnant — though signs had been placed warning of the danger of possible flooding. (There'd been a considerable storm night before last; yesterday's trail had in fact been washed out at one point.) 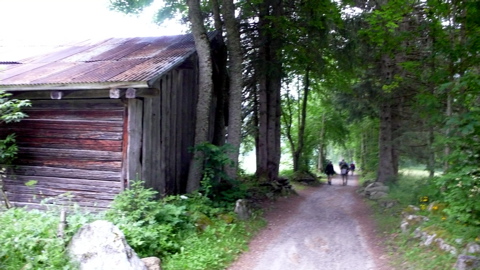 In less than an hour we came to the (locally) famous Notre Dame de la Gorge, a handsome Baroque chapel on the site of one of St. Anthony's hermitages; 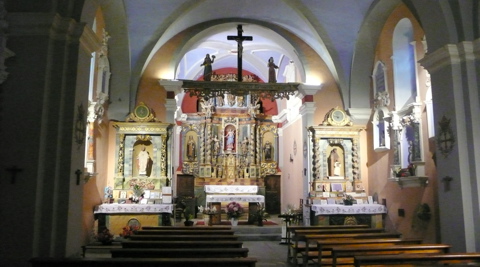 here I put on my rain pants for the first time, and covered my pack, and we turned off the road onto an old "Roman" road paved with living stone. Forty minutes later we were at the splendid "Roman" bridge at Téna, crossing the Bon Nant at a spectacular gorge. 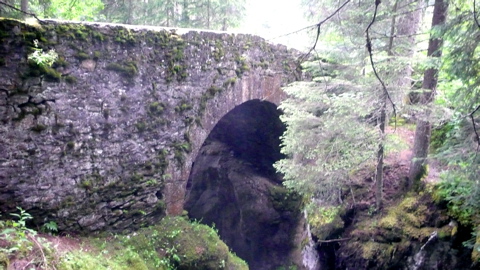 (I set "Roman" in quotes following the example of my guidebook, Du Léman au Mont Blanc, published by the Féderation Française de la Randonnée Pédestre: the authenticity of much of this Romanness is in question, and the bridge doesn't look all that old to me.)
In a few more minutes we'd climbed up through very heavy mists to the Chalet du Nant-Borrant: it seemed closed, but a very handsome, lean, montagnard-looking guy beckoned us in and brought us tea, willing to converse in Italian as well as French, and telling us a little about business: open during the ski season, open again during the summer rambling season; otherwise he lives down in town, doing what I didn't ask. A pleasant life, I'd think.
It was pleasant, but we couldn't linger beyond half an hour: we had a lot of climbing to do, and real rain was beginning to set in. We went out into it, through a troop of Netherlanders divesting themselves of raingear and backpacks.
The weather was pretty miserable but it took only 45 minutes to arrive, on time by the guidebook, at the chalet la Balme, where we warmed up with another pot of tea and some really first-rate tartelettes aux myrtilles, made, clearly, on the premises. 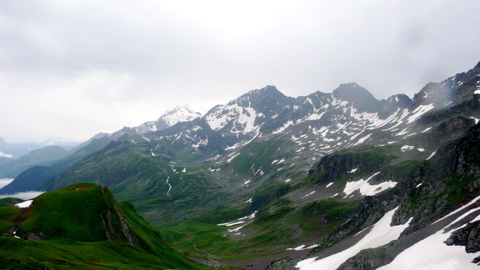 Then it was a real slog up to the col du Bonhomme. The terrain alternated between scree, packed dirt, and patches of snow, and visibility was limited, with rain on one's eyeglasses, hat and hood pulled down over one's eyes, and blowing mists. 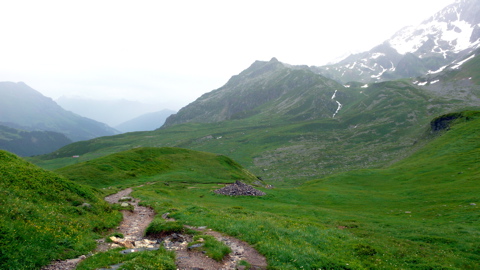 At one point things lightened up enough for us to stop for a quick lunch — fruit and sausage — at the "Dame Anglaise" tumulus, a pile of rocks that's been accumulating for years on the site of an Englishwoman's accidental demise. Then the rain began again and we set out again, losing our way at one point, costing a fifteen-minute penalty, but finally arriving at the col du Bonhomme, 2329 m., where we found a small stone hut protecting four stoic British ramblers, and here we rested half an hour out of the rain. 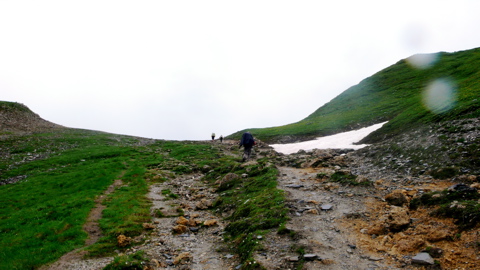 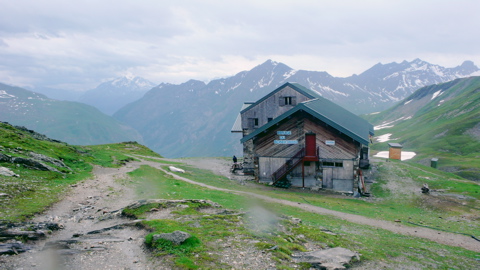 The place had 108 beds, and was nearly full that night, mostly with French ramblers out making the Tour du Mont-Blanc. We were seated at a miscellaneous-languages table with a couple from Barcelona and three Italians, and I turned in early, falling asleep to the welcome (and muffled) sound of the French tables singing folksongs, accompanied by the refuge gardiens on violin and guitars.

all photos cs except where noted
Posted by Charles Shere at 11:04 PM