I WAS UP QUITE EARLY, by six, to admire the morning. They're so silent; the air is so clear and bracing; the silence so beautiful. The only sign of human activity was a few steel milk-cans set to cool in the basin at the end of the fountain: I was glad Mac hadn't heeded my suggestion, yesterday, that he soak his blistered feet in it. 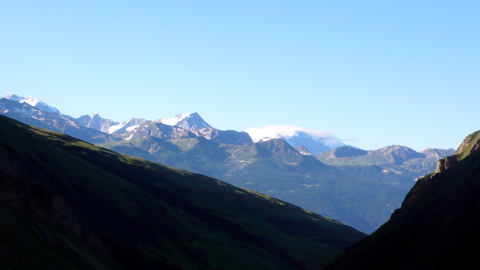 Before long, though, the gardien was out with his toolbox, ready to attach what looked like an old Signal Corps telephone to a post by the front door, purely for décor. I gave him a hand, and we conversed a little: last night's genepi was indeed made in Italy, the French stuff isn't nearly as good; the secred ingredient in the barbecue sauce was Coca-Cola, it was a Tex-Mex recipe.

And then others began to emerge from the dortoir, and then it was time for breakfast, rather a nice one given the lack of croissants, bacon, or eggs. We ate with an English couple, Jill and Peter, and watched bemused as two other Brits, young men, approached Jill for a temporary loan: they'd not brought enough cash for their room and board. These refuges don't take credit cards; you have to be prepared. Then we began our walk, about 7:45, down through alpages with their bespectacled Abondance milk-cows, then — too soon — on paved roads, quickly losing our way, not having noticed a significant balisage. The general way was clear enough: we were descending from 2000 meters to the river Isère at 719 meters; there we'd cross, after walking through a few villages, and continue on to the town of Landry where we'd spend the night. Since our guidebook promised a hotel there I had reasoned that a clinic or at least a doctor might be available to deal with Mac's blistered foot, and the gardien at La Balme assured me that if we couldn't find medical help there, it would be easy to get to a bigger town, Bourg-St.-Maurice, where it would surely be available. 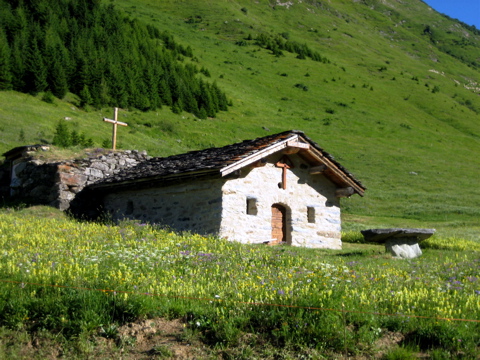 So we continued downhill, past chapels and fields of flowers, but off the GR5 and instead on paved secondary road leading to Valezan, "a picturesque Tarentaise village," my guidebook had promised, "with houses staged along the main street following a line down the steepest slope of the terrain," like an Italian town. Here at 10:30 we found a gîte-restaurant, not open for its principle business, but with a bar-café whose genial proprietor, apparently Nigerian in origin, supplied a pot of tea and slices of caramel cake, and we celebrated having found the GR5 again. 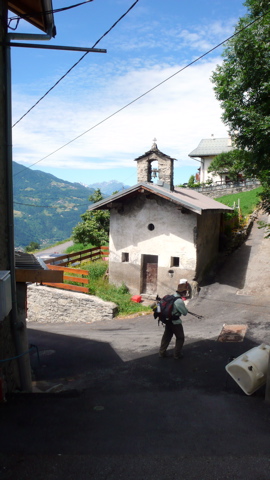 Then we walked down that main street, indeed winding down the slope, between barns and farmsteads, sometimes clearly a donkey-path, not a road meant for automobiles. We found the English couple here, but quickly lost them: they apparently didn't believe we were on the GR5; we never saw them again. 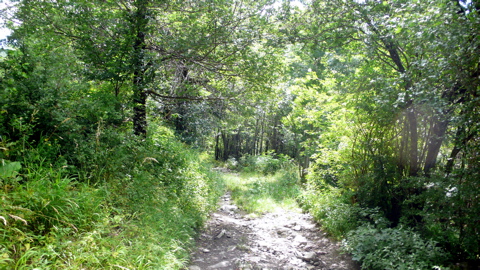 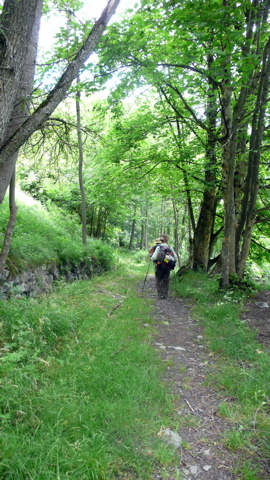 Soon we were out of Valezan and in the country, on a dirt, sometimes roughly cobbled donkey-path descending in lacets, hairpins, along an old stone wall, skirting what seemed an abandoned orchard: huge old cherry and apple trees quite neglected but sometimes heavy with fruit. Ultimately this brought us to Bellentre, whose café was frustratingly closed though we wre hungry for lunch.


We crossed the Isère here and again abandoned the GR5, deliberately this time in order to reach Landry, arriving after another couple of kilometers on asphalted pedestrian-and-bicycle path along the river. The town seemed elusive: we walked up a fairly steep main road away from the river, across the railroad tracks, and finally found a café and, across a stream and a parking lot, our hotel, the Bon Acceuil. 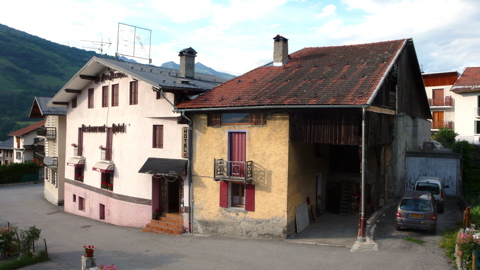 It was only one o'clock: we showered and changed and took a cab into Bourg-St.-Maurice where Mac had his foot tended to; we strolled the interesting (pedestrian) shopping street, and had lunch. Our obliging cabby picked us up about four and took a different route back to Landry, pointing out the local features and discussing the local history, and we had a delicious dinner at our hotel (paté, Boeuf Bourgignon tasty of cloves, and the three classic cheeses of Savoie: tomme, Beaufort, reblochon) in the pleasant dining room, very characteristic of country French hotels. 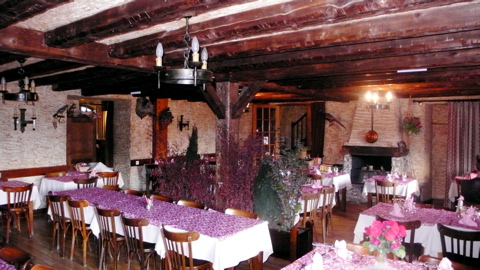 And then it was time for a short game of boules in the twilight, and so to bed.

all photos cs except where noted
Posted by Charles Shere at 4:51 PM