Up at 6:45 to a fine clear morning, the sun lighting the forest and shops across the river Arc, out our east-facing window, 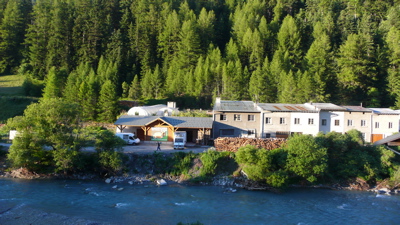 and to a nice hotel breakfast: orange juice, croissant, café au lait. We were under way by quarter past eight, walking through town, past a little park with a boulder bearing a bronze monument to Flambeau, a rescue dog whose life was sacrificed, in 1988 I think, in the rescue of a number of mountaineers nearby. 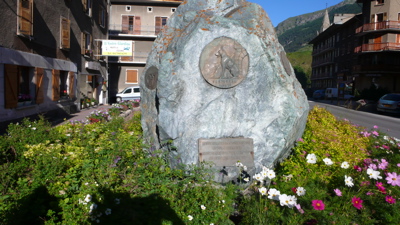 There are many avalanches on these slopes, and weather comes up quickly. We seem to be at sea level, walking this sluggish valley after the last couple of weeks among the cols and passes, but we're still about a mile above sea level and this can be dangerous country. 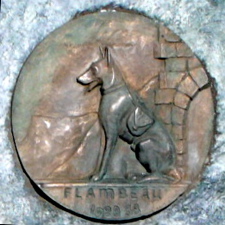 At the foot of the monument an inscription: Passant je suis autre chose qu'un monument / peut-etre plus qu'un symbole / je suis un example (Passerby: I am not merely a monument / perhaps more than a symbol / I am an example.) 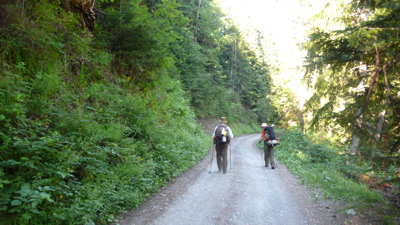 We crossed to the left bank of the Arc, crossed the highway N6, skirted a tennis court, and regained the Chemin du Peit Bonheur, stopping for a bit to admire a troupe of adolescents out on some kind of group camping activity. In an hour and a half or so our forest road led us to yet another vieux village of stone-roofed buildings, Termignon, where we stopped for tea, and to Sollières-l'Enverse, where a recently built museum of archaeology enlightened us as to the history (and prehistory!) of this once-remote valley. 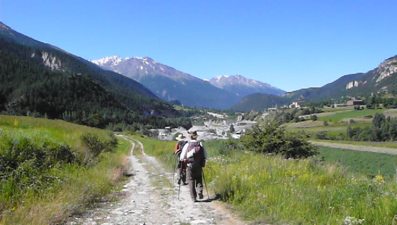 A short conversation with the archaeologist in charge, who'd driven up in a little car, made it clear that the museum is financed locally for the most part (though local finances may be heavily helped by national funds, for all I know): this history is a source of pride here in Sollières and apparently in the entire valley; increasingly I've noticed communities wisely investing in not only tourism, not only eco-tourism, but intelligent, educationally interpretive tourism, with local museums, illustrated pamphlets, and signposted walking paths presenting the terrain and the villages and contributing as if subliminally, I think, to a sense of ownership, participation, and understanding of their corner of the globe to the inhabitants as well as their guests. 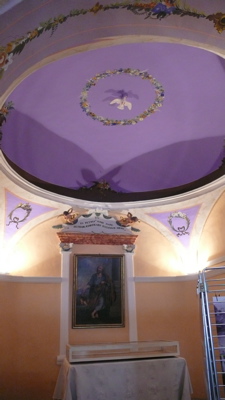 The museum had been built next to and attached to a chapel with a strikingly painted ceiling, also proudly shown off — the cultural inheritance is as important to these people as their natural history. But we had no taste to linger. Everything you see in these towns seemed ambivalent: artificially maintained in its overall aspect, on the one hand; fraught with interest and sudden beauty in its details, on the other. 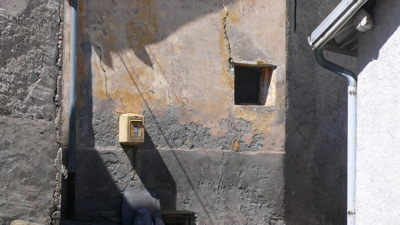 Somehow we lost our way after leaving the museum and wound up walking far too long along the asphalt shoulder of N6 into the next town, le Vernay; but from there we rejoined our small-happiness way on a farm road, 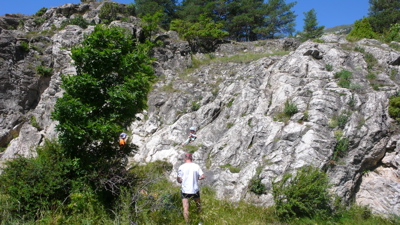 through pastureland, crossing bridges, and entered Bramans just before one o'clock. Then we had to decide whether to continue on: the next certain night's lodging would be in Modane, five hours away.
Here was a more tempitiing alternative: a little hotel standing at the crossroads that seemed the center of town; a pleasant forecourt with shady tables offered lunch… 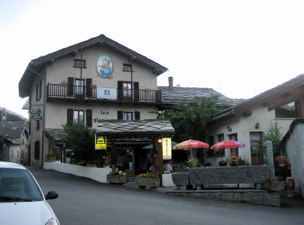 Photo: Mac Marshall
We were sluggish, complacent, diffident. We should have gone on to Modane today, but lacked resolution, I thought. Bramans was quiet, everything closed up at midday. The one grocery didn't open on time, at two o'clock; we waited outside, then went to the town library for a little Internet work. I spent the afternoon thinking about the options down the road: I want to celebrate hitting our halfway point -- Modane -- by spending a day in Italy, taking Henry to see his great-grandfather's grave, and the little mountain town his grandfather came from.

In a guidebook to the mountain refuges our slothful valley variant had ruled out I read a description of the reason for these Alpine rambles: for the "conquest of the useless." Irrelevant preoccupations kept flitting through my mind: how many "Les Glaciers" had we slept in; who actually owns these houses and how often do they visit them; just how spontaneous are the waters in all these trough-like fountains. The hotelkeeper filled a plastic sprinkler-can at his fountain and watered the geraniums. What kind of place would we find in Modane? Lindsey had read that it was Fourneau, not Modane, that we wanted to investigate.

Henry and I played some gin rummy; I took a pastis. Rabbit, braised in white wine, for dinner in the huge unsuspected upstairs dining room, virtually empty of guests. Fairly early to bed.

all photos cs except where noted
Posted by Charles Shere at 12:47 PM