Beginning with the walk of July 14, additional photos from our walk across the Alps can be found here
Day 30: July 19, 2008

THANKS TO FULLY BOOKED hotels, confusion over too much advice, irresoluteness and my own carelessness, this was a hard and a shameful day. But a beautiful one. 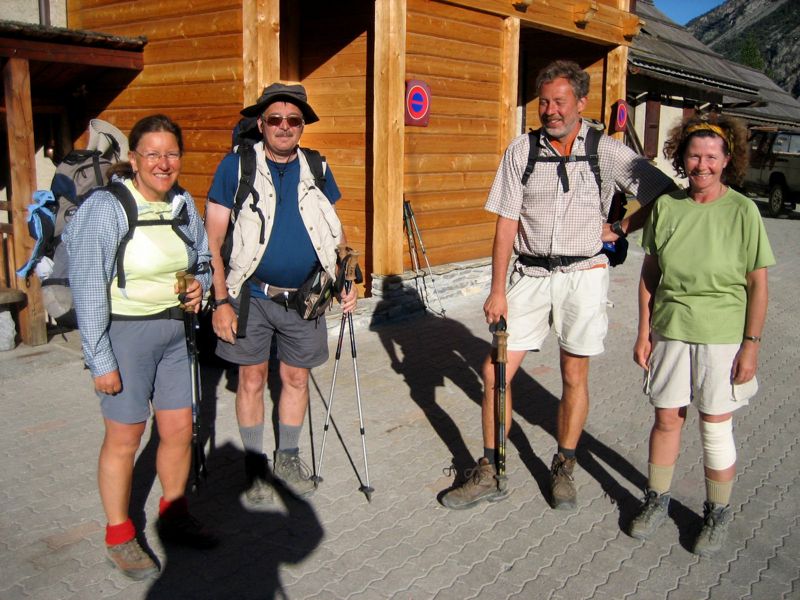 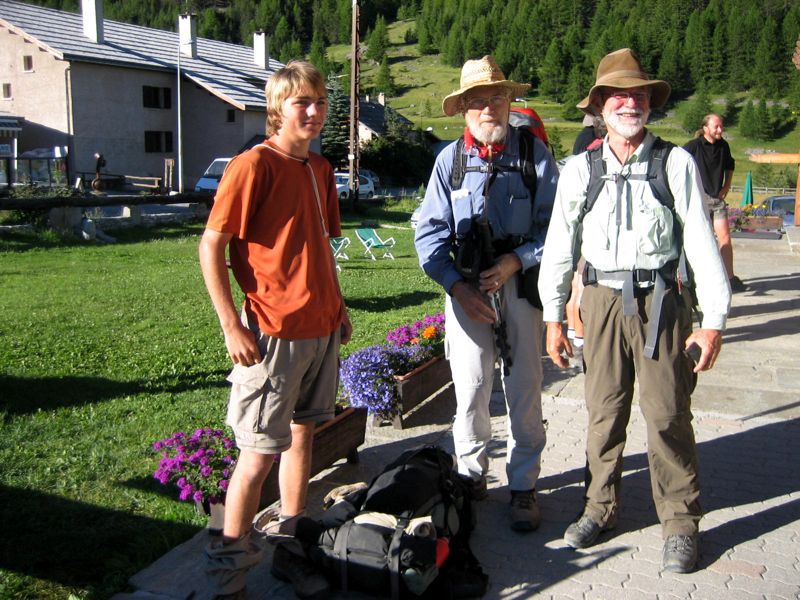 "The Germans": Dagmar and Andre Jankwitz, Thomas Greff, Irmtraub Marstaller-Greff (photo: Mac Marshall) Henry, CS, Mac (photo: one of "The Germans"
It began at 8:20, when we left last night's gîte together with our German friends, walking through town, past a grassy recreation field, and then hitting the road and trail toward the col Girardin, at 2700 meters (8850 feet) the second highest point on our entire trip. 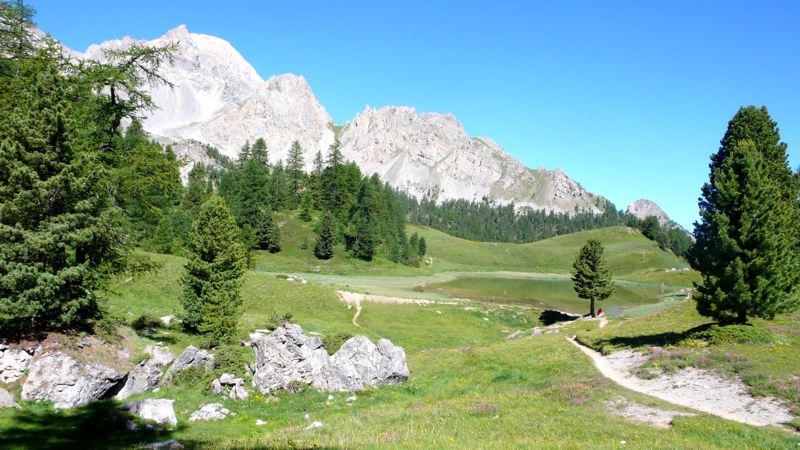 In a couple of hours we arrived at the lac des Prés-Sobeyrand (lac Miroir), where we stopped for fifteen minutes' rest. I was increasingly mindful of our Austrian friend's advice: five minutes rest every hour, an hour's rest every day: but mindful is not actual; the terrain and the weather have a lot to do with it. I was surprised to see two or three pop-tents here: bivouackers were making a late morning of it — but then I recalled we'd walked out of the Parc National Queyras the day before; perhaps camping was, if not exactly legal, at least not illegal here. 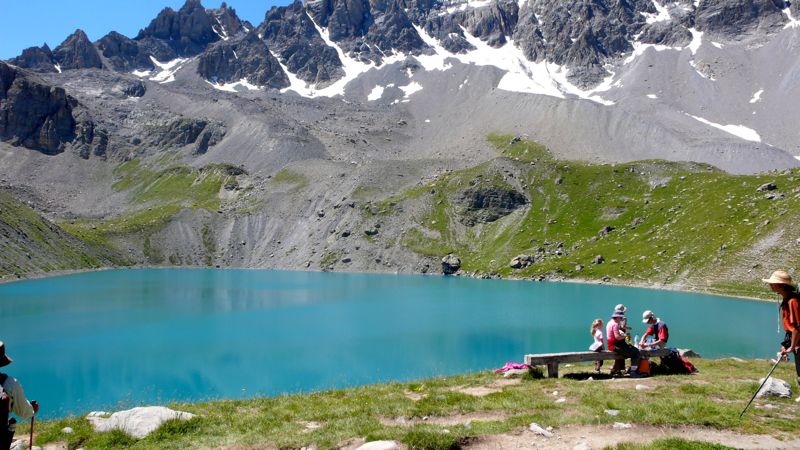 In another hour we came to the Chapelle Ste.-Anne at an even more impressive lake, crowded with day-hikers (this being a Saturday): we ate our picnic lunch among them, then left just as the Germans arrived — we had actually passed them on the trail somewhere! 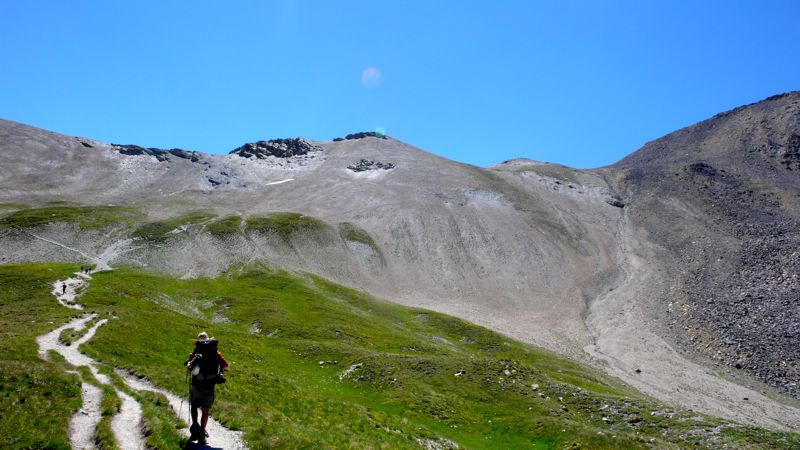 It was a tedious climb from here up to the col Girardin: I slow down when I get above 8000 feet. As nearly every day, when climbing steadily, I was annoyed by mentally hearing obsessive silly tunes, always diatonic, always in duple rhythm: today's was

and so on…
Alll you can do is put up with it; after a while something, stray conversation usually, drives it away. 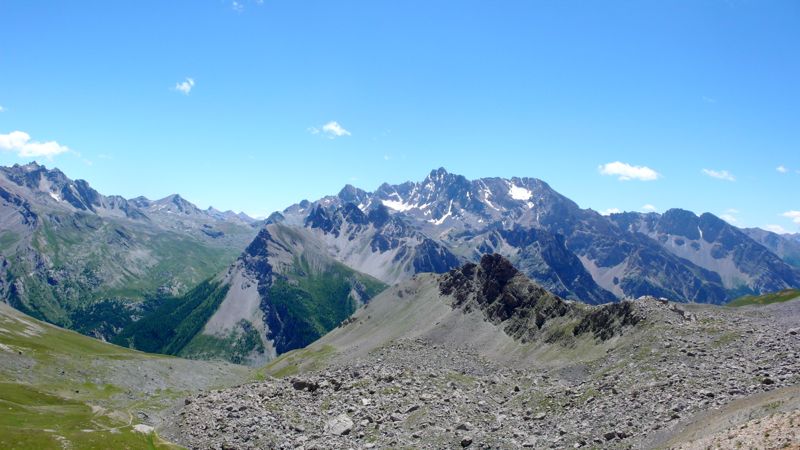 We reached the col a little before one in the afternoon. As well as the second-highest of our entire walk, this was a politically meaningful moment: we were leaving the département of Hautes-Alpes and stepping, finally, into the Alpes-de-Haute-Provence: we were in Provence!, But we didn't linger: we had a lot of territory to cover, and I was still uncertain about the night's lodging — the Belgian had reserved a place at St.-Paul-sur-Ubaye; the tourist bureau lady in Arvieux has reserved one at Fouillouse (I used Mac's name for that one, translating into French — "Maréchal" — for the sake of simplicity and to eliminate confusion).
A number of lacets— hairpins — across a suprising pré, pasturage-field, full of flowers; and then a footpath along a new torrent, the Séchoirs; then a surprising large rock covered with inscriptions, some in the elegant hands of the 19th century, others in more recent scrawls. 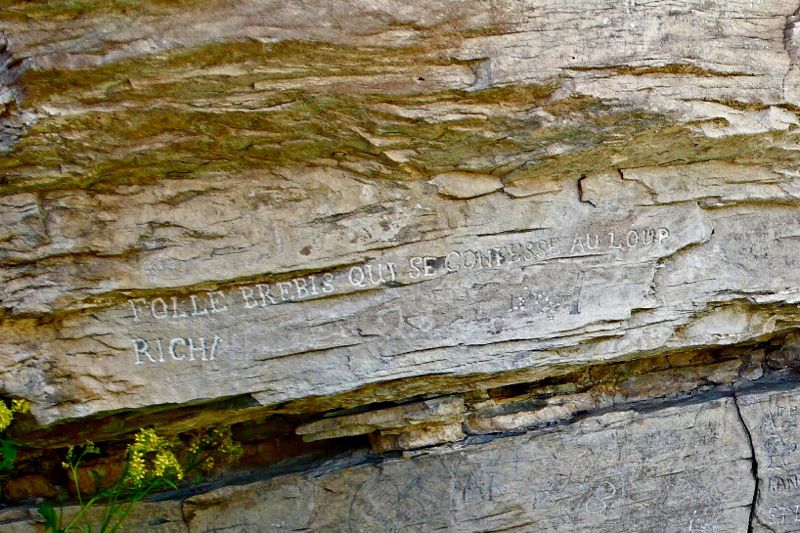 I particularly liked one ancient graffito in beautiful majuscules: Folle brébis qui se confesse au loup (foolish the ewe who confesses to the wolf). We rested: then down, down, and down. At 2:45, we were down nearly nine hundred meters from the col. 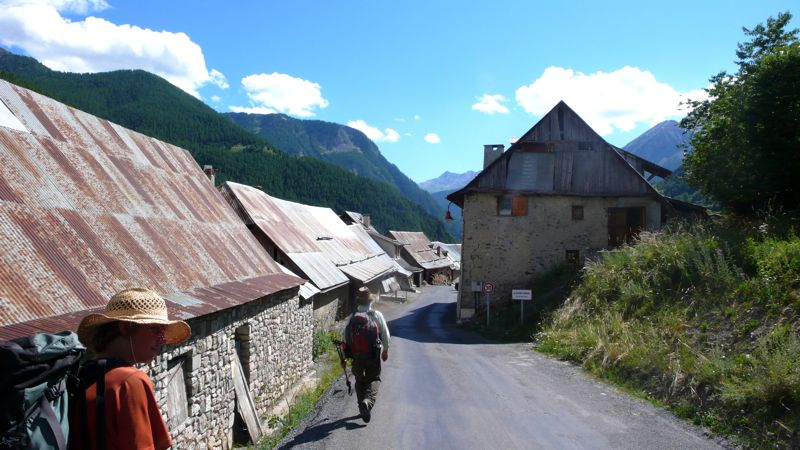 By 4:40, we had entered the village of Grande Serenne, where some tables and chairs on a terasse invited us to tea, conversation, and a rest for forty minutes, knowing we weren't that far from St.-Paul-sur-Ubaye, where I expected a night's lodging above the town épicerie. And on, afterward, through Petite Serenne, and down a few kilometers of asphalt départemental road to St. Paul and its gîte, where a sign on the door said complet. I told the grocer we had reservations: Ah, en ce cas, montez, montez!
We toiled up the staircase and gave our names, all of our names; but none of our names was inscribed. We had no reservation. There was nothing to be done.
We went back downstairs and had a beer on the sidewalk, though there was no sidewalk, and considered the possibilities. We could take a taxi to the next town, Fouillouse, where there might be a room; but there was no taxi in this town. I phoned Fouillouse: Ah, mussieu Maréchal, on vous attend; a room is waiting for us, dinner too, but how to get there?
A boy in the grocery suggested looking among the notices posted on the door of the mairie to see if there might be a taxi service, so I walked into the town. No taxi notice. I saw three or four men just finishing a game of boules alongside the mairie, and did not hesitate to approach them:
Excuse me, gentlemen, I am walking the GR5 with my grandson and a friend, my friend can't walk another step, he is lame and my grandson not too well; do any of you know anyone who might be willing to drive us to Fouillouse?
They looked at one another doubtfully and discussed the situation. I did not listen. Then one fellow, the largest of the four, said he'd be glad to give us a lift if he had room in his little car. 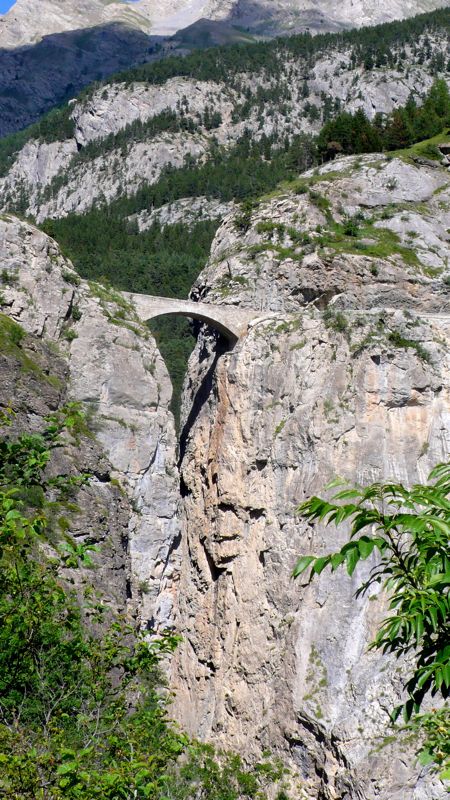 We drove downhill to the épicerie, picked up Mac and Henry (miraculously restored to good health), and drove across the stunning Pont du Châtelet, above the gorge, to Fouillouse. He turned out to have both a sense of humor and a Jeep Cherokee, He seemed eager to converse with us Californiens, telling us that he lived half the year in Petite Serenne where he was born; that his mother had recently died and yes that was her house, the mansion-like house we'd noticed was for sale; that no, we couldn't give him anything to thank him for the ride, not even buy him a glass of wine; and, finally, just as we drove up to our hotel, that his name was Lafayette.

Ah, well, mussieu Lafayette, I said cleverly, we are here. And we just had time to thank him, climb down out of his Cherokee, assure the anxious Madame in the hotel that we had fiinally arrived, and clean up, before sitting down to yet another chicken dinner.


Estimates of distances and denivelement are even more difficult than usual for this day, as you can imagine:
Distance walked, day 30: ca. 26 kilometers (16 miles) • Time: 9 hours • dénivelément: ca. 2450 meters (8000 feet)
Additional photos from our walk across the Alps can be found here

all photos cs except as as noted
Posted by Charles Shere at 10:00 PM