Beginning with the walk of July 14, additional photos from our walk across the Alps can be found here
Day 28: July 17, 2008
NO CROISSANT AT BREAKFAST in this gîte! We're in a suburb, buildings set just a little too far apart, hardly any commercial buildings, no bakery to be seen. 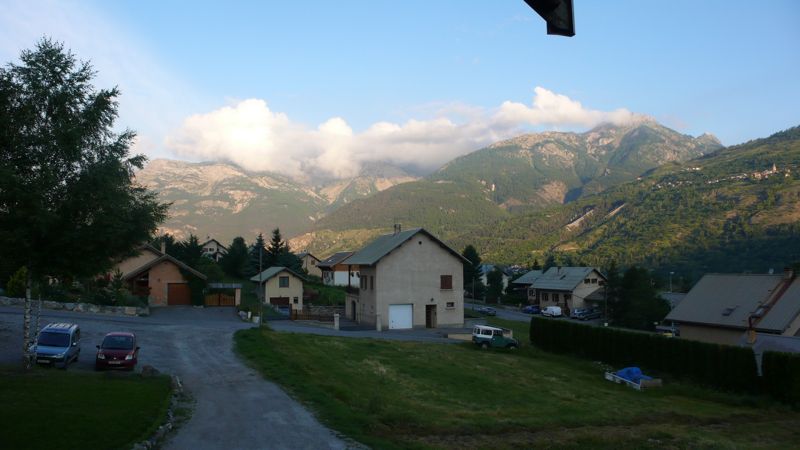 We all set out at about half-past eight, Hans and Henny, the Germans, and us; but we lost our way, not finding any balisage (blazes marking the route) and unwilling to trust the map. This cost us half an hour as we actually walked a large circle retracing yesterday's final twenty minutes, and finally we had to trust the map and walked on southeasterly out of town up the Ayes valley. 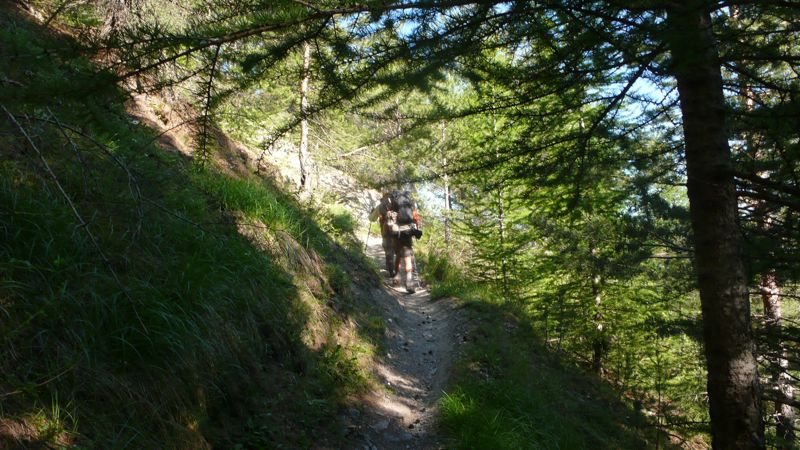 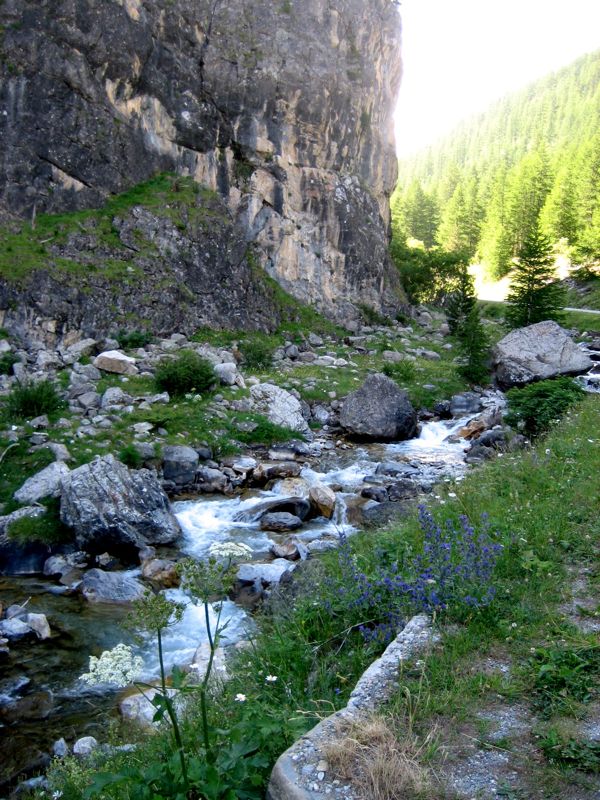 photo: Mac Marshall
Soon enough we encountered balisage, just where I'd thought it should be, and began the familiar daily walk: forest footpath; unpaved road; alpages; then the higher country toward a pass. An hour up the trek we came to a surprise, a country house hidden away among the trees, but GR5 turned away from it, respecting its privacy, continuing toward the Chalets des Ayes. 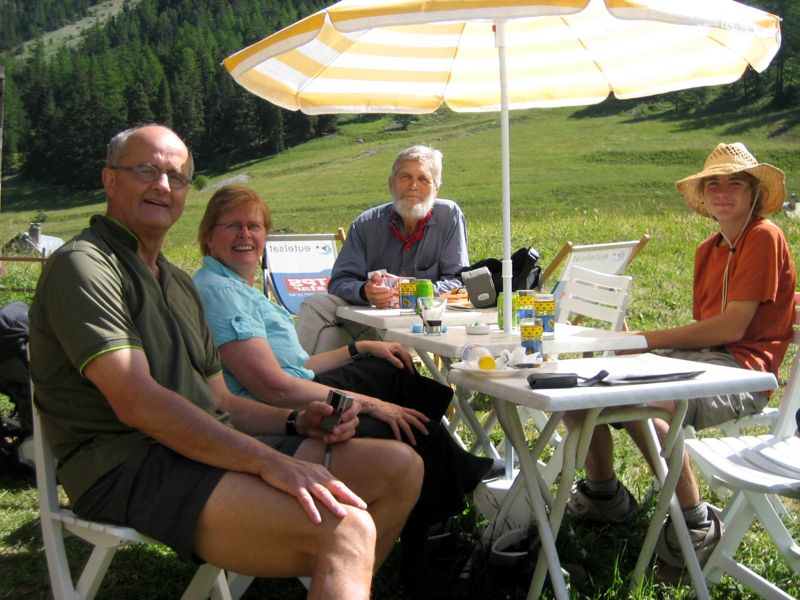 Hans & Henny Both, CS, Henry Shere (photo: Mac Marshall)
Here there was a buvette, and at the buvette we found Hans and Henny, and joined them in a pot of tea for half an hour or so; then continued on in forestr and field. 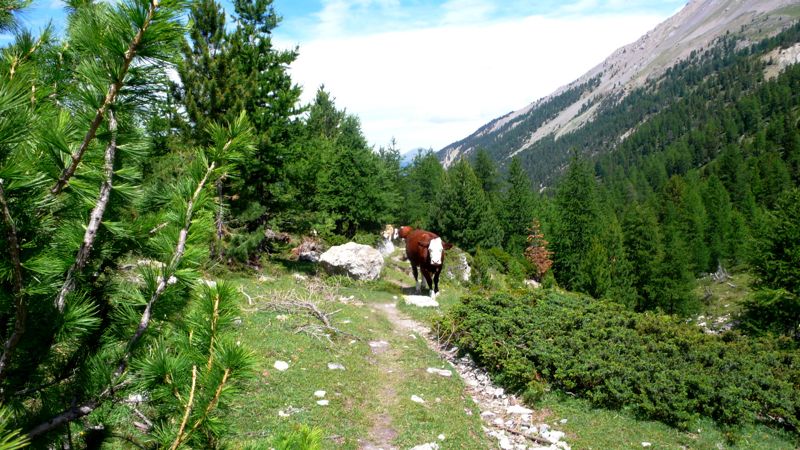 We'd already climbed five hundred meters, but had a harder seven hundred to ascend, first through relatively bucolic country toward the Chalets de Vers le Col, with herds of milk-cows sometimes following, sometimes leading us (but more often stoutly ignoring us). These chalets are in fact used; this being summertime, school-age children seem to be here with their berger fathers and bergeresse mothers, a promising sign… 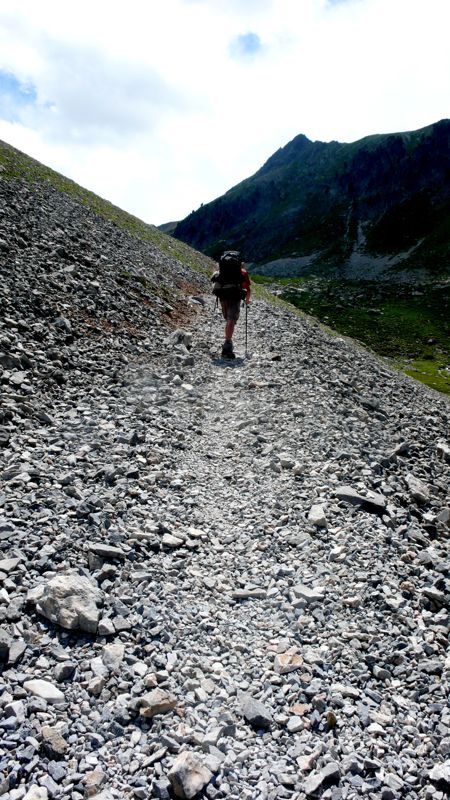 The last climb to the Col des Ayes was harder, across scree much of the time. At 2477 meters we were well above 8000 feet, where I begin to slow down when toiling uphill; and at the top Henry used my camera to catch me taking a five-minute snooze, first time I'd done that on the trip. (Last time, too.) 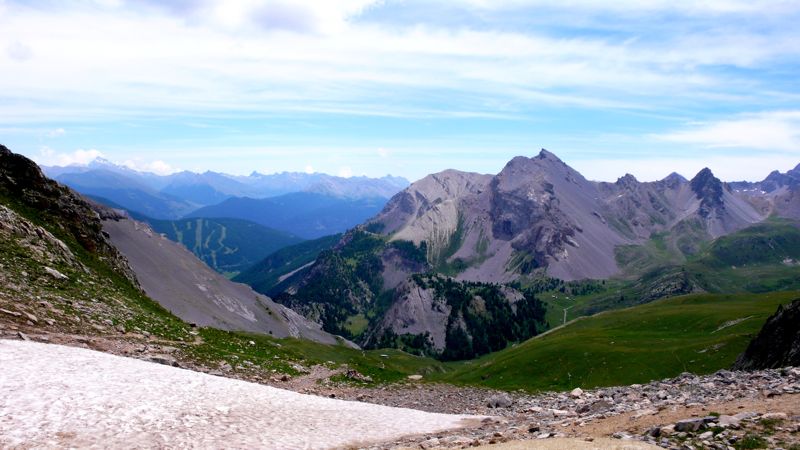 Though it's not the highest pass of the walk, even of this southern end of the walk, this pass seemed somehow definitive. We looked southeasterly across ridges and valleys to come, toward Mt. Viso in the distance, on the Italian border, and the country seemed drier, warmer. There was little snow on that border, though there was still a patch here. I had read somewhere that Briançon with its fountains, geraniums and pastel-colored buildings qualifies as the northernmost Provençal city (and, after Davos which is really only a resort, the highest city in Europe); here at the Col des Ayes I really felt I'd entered Provence, though at an improbably high elevation! But I hadn't; we were still in the d´partement of Haut-Alpes; innkeepers and shopkeepers would continue to dispute the Provençality of Briançon as I continued to investigate the matter: Briançon? Barcelonette? Perhaps not really until Gap?
In any case what we were entering was another National Park, the Queyras, and after our snooze and a half-hour for our picnic lunch we started out, at two in the afternoon, downhill, in some cases alarmingly downhill. 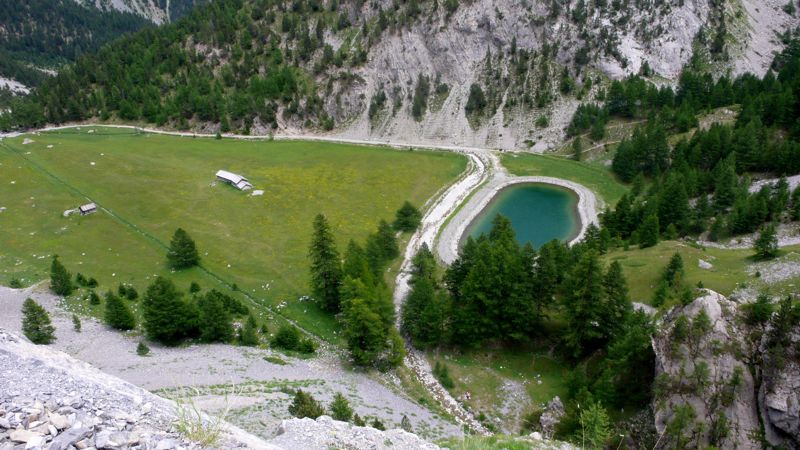 There below us, for example, was what seemed an enormous lawn— pelouse is the French word for both :lawn: and "(grassy) prairie." And alongside it a pond; and beyond it, as it turned out, cliffs which served as practise-fields for apprentice rock-climbers. 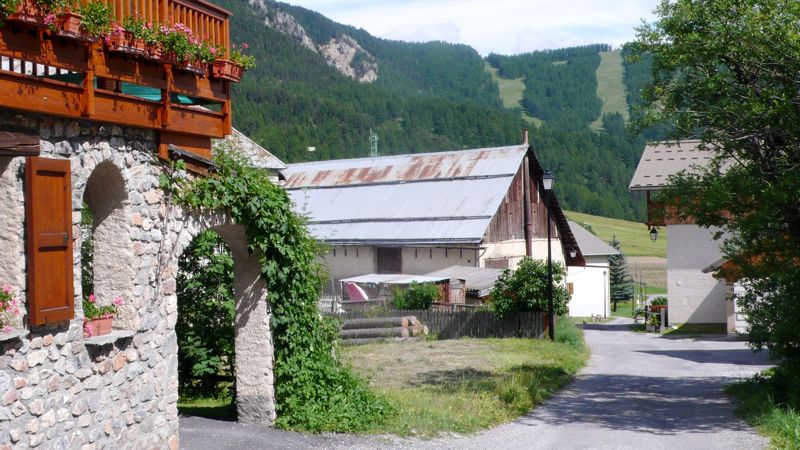 By half-past three we were in the town of Brunissard, where we stopped for another pot of tea; and then we strolled further down the road (D902) to the smaller hamlet la Chalp, where we'd reserved a bed for the night at the Chalet Viso, right on the GR5, a hundred yards off the road. 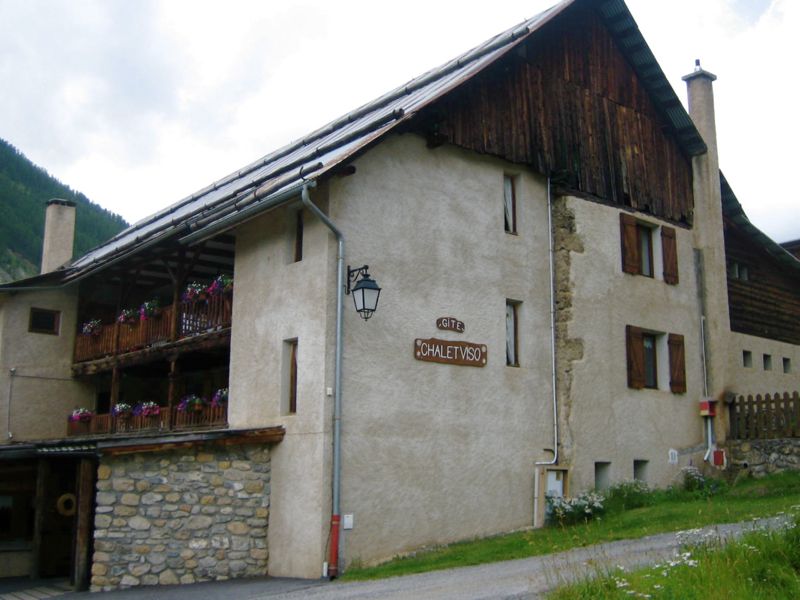 photo: Mac Marshall
This seemed a particularly comfortable gîte d'étape, probably cozier in winter than in summer with its fireplace and casual lounging furniture; and we liked the dinner, which seemed contrived to define the terroir through which our long walk was taking us, though in reverse direction: a "Niçoise" salad (so billed, but compromised, I think, by kernels of frozen corn), grilled chicken, and potatoes Dauphinois, with peach tart for dessert. (By the way, I've listed the menu of every night of the Long Walk on The Eastside View.)

Hi Charles,
Thank you for the tour of the Alps.
Mary