A RIDICULOUSLY EASY day; a stroll. But in spite of a decent breakfast in the big, empty dining room at the Hotel Glacier des Evettes, I started the day's walk in a disaffected mood. We were low, at 1800 meters (5900 feet), and would spend the day in this valley. There were peaks on both sides, behind us and ahead of us; beyond the ridge to the right there were glaciers; over there to the left lay Italy, and here we were down in this riverbottom with flies buzzing around us.

We were walking the "Chemin du Petit Bonheur," literally the way of the small happiness, idiomatically "hit-or-miss road," I think. We were taking it because the guidebooks had promised interesting human-related evidence: isolated mountain life, evidences of early settlement, etc., etc. But we were three, Mac, Henry, and me; we had divergent interests, and we had to get on. 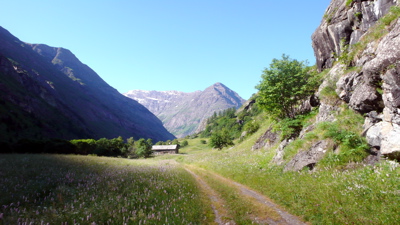 I wasn't sure how far we'd walk today, and I was impatient. This was the twentieth day of the trip; I'd budgeted forty for the entire walk, and though we were close to my projected halfway point — Modane, a city I did not look forward to — I felt a sense of haste. We'd already given up one aspect of the GR5, the high peaks in the Vanoise; now I sensed we'd have to give up another, the reportedly glorious descent to Menton. We'd have to go to Nice instead. 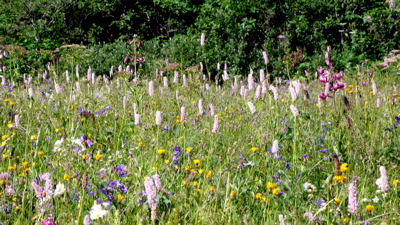 We left the hotel at quarter to nine, quite late by our standards, walked through the old town, and then took a farm road down the valley, whose fields were devoted to grains, pasturage, and wildflowers — many wildflowers. We were walking southwesterly, into the sun — the one disadvantage of taking this walk toward the south (offset by many advantages). 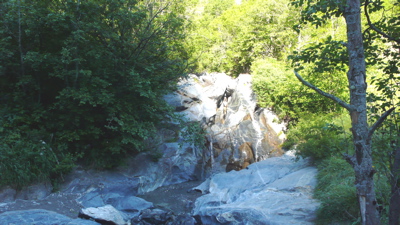 In an hour and a half we stopped at a pool on a side-stream coming down from the Vanoise to join the Arc. I've seen other such sites; pools of clear water, set about with small trees or flowering bushes, they often seem special, atavistic, even somehow sacred. I'm no monotheist; to me what is sacred speaks out from the landscape (or very occasionally from within living sentiment). The Fontaine de Vaucluse is such a spot; another is at Filitosa on Corsica; there was one on the creek among the oaks and madrones on the place I lived on as a child.

This was another such place: ordinary to many, unphotographable, but to me resonant. One doesn't expect such places to be anything but private and personal: but when we resumed the path it took us, within twenty minutes, to the famous Rocher du Château, a cliff bearing petroglyphs from the Stone Age, a neolithic factory site, in fact, famous for its spear- and arrow-points, prized locally and even abroad, the subject of extensive neolithic trade.

Another unphotographable site, in fact: the rock-paintings are faded almost away, and photographs can't examine them while remaining aware of the site, as the human eye can; nor can they convey the feel on the skin, the perception in the ear, of the warm rock wall one faces, the scent of the roses and grasses, the whisper of the breeze, the space within the valley. I'm not sure the others felt all tihs; I wondered whther the busy stone-chippers did, twelve thousand years ago; and whether anyone would, twelve thousand years from now. 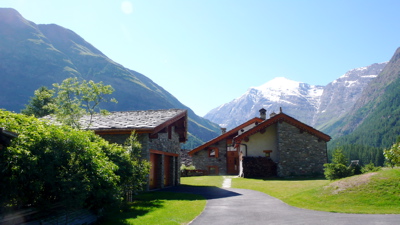 The Rocher du Château was more interesting than the next village, Villaron, which has retained its traditional buildings at the expense of a somehow artificial, complacent quality. The houses seem lived in, in comfort, but not actually worked in; thrre's little activity; the towns seem like bedroom communities. I doi enjoy the vernacular architecture, though; the way the pitch of roofs echoes the slopes of the mountains beyond; the stone walls continuing their conversations with the stones of the stream-beds. 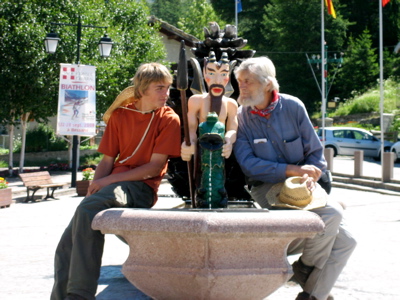 Henry, Devil, and me (photo: Mac Marshall)
By eleven o'clock we were in Bessans — "not a village like the others," promised my guidebook, distinguished "by its traditions, customs, and history." All this is true, but what is fascinating in these villages takes time to unfold, and we lacked the time. We photographed one another with the curious devil on the town's central fountain, then climbed to the St. Anthony chapel on a hillside east of town, visiting first the church, then, thanks to the presence of a young man who sat knitting with his girl friend, the chapel itself.

Bessans has a complex religious history: why does this chapel enclose the most beautiful, utterly fascinating primitive frescos I've seen outside of Italy? Dating apparently from the early 16th century and painted by unknown hands, they portray scenes from the life of Jesus, revealing as many details of medieval life as they do evidence of Christian theology. You could spend three hours in here, but, Devil take it, it was time to move on. 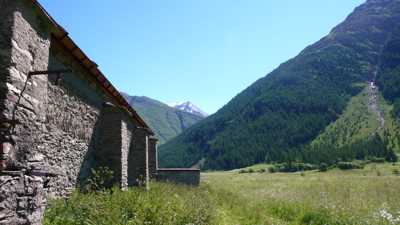 East wall of chapel. Photographs of the church, chapel, and frescos are online here in a Dutch-language page: search for "Bessans". 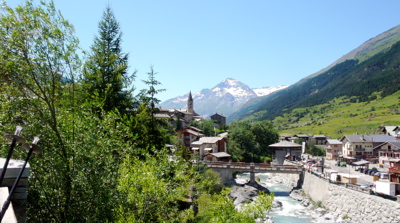 By 2:45 we were in the next town, Lanslevillard, where a small outdoor market languished almost unattended in the sun, in the main street, above the huge concrete walls that contained the river Arc, for here there had been a disastrous flood. We crossed to the left bank of the river and finally found a café that was open, had a beer, and continued on: there seemed no bed for us here.

In an hour and a half we re-crossed the river and walked into Lanslebourg, our best chance for a hotel. This was the most active town of the day's walk, with bars and cafés, hotels and shops; and here, par hasard as the French say, we found a very nice hotel. We knew it by its proprietor, a tiny, birdlike woman who must have been of retirement age but who busied herself happily in the hotel dining room. Yes, she had a room for three; and led us upstairs (of course: we'd been walking all day) to a pleasant room with lots of windows looking over the river. Yes, she would wash our clothes for us — what a pleasure! So we showered and changed, visited the town library for its Internet connection, stopped for an apéritif to while away the time until dinner, and then ate at the hotel: Savoyard salad with charcuterie, blanc de volaille with soft polenta and grilled endive (the obligatory tartiflette on the side), tarte aux myrtilles; ordinary wine in the half-liter pitcher, as was our evening routine.

Then we retired to our room to think about the day and the weeks so far. The Long Walk was punctuated, I had projected before leaving home, by three cities, dividing the walk into quarters: Chamonix, Modane, Briançon. Tomorrow, I thought, we'd be in Modane; we were finishing the second of the four guidebooks. The high mountains had been exhilharating; today's walk was somehow a let-down. I prefer the presence of cows to that of cars; mountains to men.

all photos cs except where noted
Posted by Charles Shere at 1:46 PM