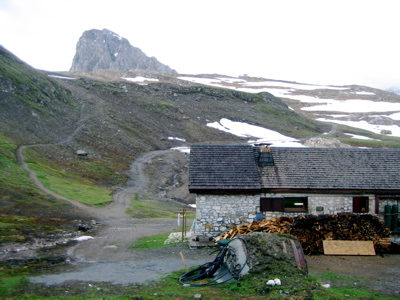 Up this morning at 6:30 to sun and scattered clouds in cool weather and, at the usual 7 am, a good breakfast. I said goodbye to Floriane, the serving-girl who'd been so teasing and friendly at dinner last night — impossible not to grow fond of these pleasant, attentive girls — and we took another look at the weather: rain and sleet. We put off our departure and put on our raingear, finally leaving the refuge at twenty to nine — it would be an easy day's walk today. 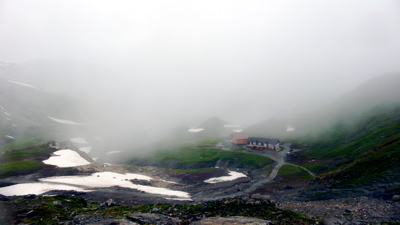 We had rain and a little sleet, but the terrain was easy. and climbed easily to the Col du Palet, cold and windy. 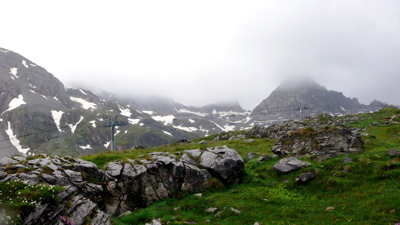 From there it was an easy two-hour walk downhill through the rain to Tignes, a ski-resort community built over the last thirty years or so, remarkably ugly given its beautiful setting. 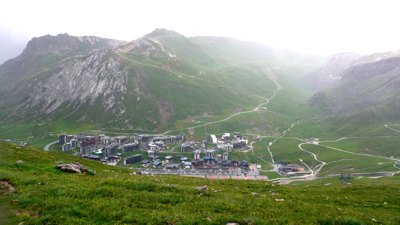 In the ski season this may be a bustling town; in summer it seemed desolate. We had a pot of tea, though, in a bar whose keeper seemed sullen with inactivity, and dried out a bit. On, then, after half an hour, on a slowly ascending traverse to the 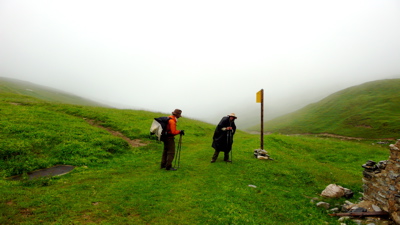 Pas de la Tovière where, had it been clearer, we'd have had our last view of Mont Blanc from this walk; and then down across the prés, fields, horses now pastured instead of cows, 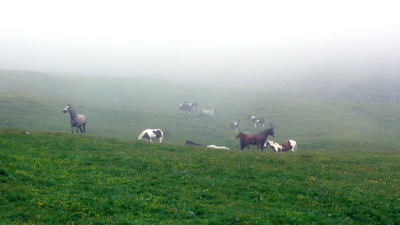 and, ultimately, at the end of our descent, through a wooded park set about with picnic tables — I'd have liked to lunch there, but we went on, hoping to arrive at Val d'Isère before things closed for the afternoon or possibly, it being Monday, for the day. 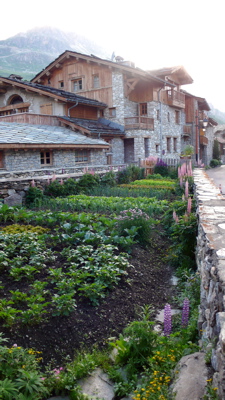 Val d'Isère is a ski town, like Tigne; but set on a traditional mountain agricultural town. The Isère runs right down the middle of town, and while the sports-equipment shops, the banks and the tourism office are in fairly new "chalet-style" malls, there are plenty of architectural vestiges of the old days. I liked the town. 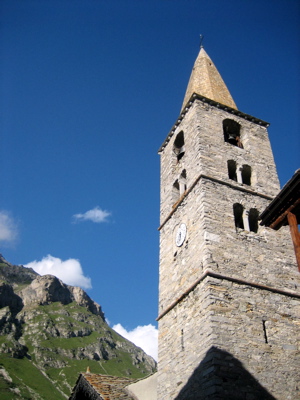 The Tourist office recommended a fairly cheap hotel, the Relais du Ski, out at the far end of town: we ate a picnic lunch in our room, 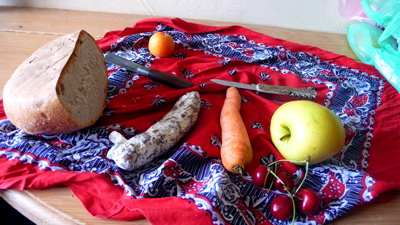 showered and cleaned up, and then went for a walkabout, as I call them, checking e-mail, shopping in the open market with a marvelous collection of sausages, 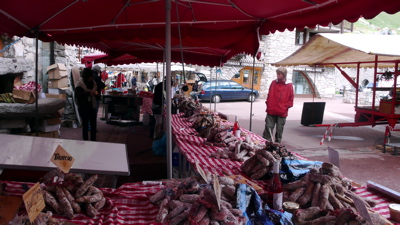 and investigating the pleasant, curiously named BuBu Bar where the Tour de France played on the television, and a beautiful old man tended bar.
More walkabout; a visit to the church; then the dinner question. Our handsome bartender had recommended the restaurant in our own hotel, but we were seduced by a more picturesque place in town, where we had an indifferent locally traditional dinner — polenta and biot again, served by a pretty young Swedish girl whose parents had been natives of India. The world is getting small.

Back at the hotel we found our old friend the bartender in the lobby. Ah, then; he's related to the proprietor here; that's why he'd recommended the kitchen — but in fact things did smell very good indeed. "Ah, les américains," he greeted us. I confessed we'd eaten elsewhere; and that we should have listened to him. "Eh bien; trop tard," he answered good-naturedly: no hard feelings. We had a couple of genepis and went early to bed.

all photos cs except where noted
Posted by Charles Shere at 1:01 PM