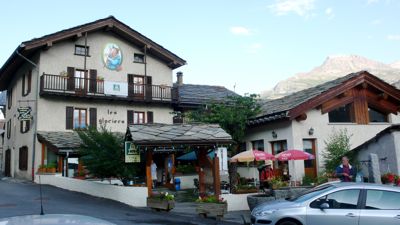 Yes: time to shake off this mood and walk out of this devilish valley. We had a decent breakfast at our decent hotel, filled our waterbottles at the trough-fountain, turned our back on the hotel at 7:45, and took a final walk through the rough-textured town of Bramans. 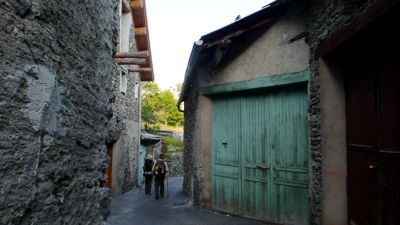 Truth to tell, if you haven't been to similar towns in these mountains before, on both sides of the border, Bramans is architecturally interesting: the stone roofs, the adaptation of peasant vernacular architecture through up-to-date techniques into residences comfortable for early-twenty-first-century tastes. And a lot of the buildings are being fixed up: like virtually every town we'd walked through in the last three weeks, Bramans had its crane. 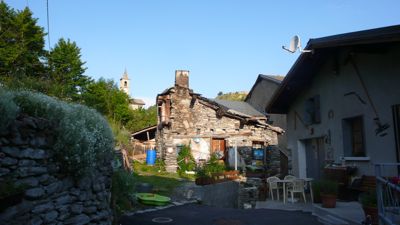 We were walking fairly close to the Arc, alongside fields dedicated to hay, or grains, or potatoes, or beets. Before long we noticed the fortifications, defenses built high up the mountainside on the other side of the Arc: this is and has been a strategic valley, leading to the Mont Cenis pass into Italy, one of the easiest passes. 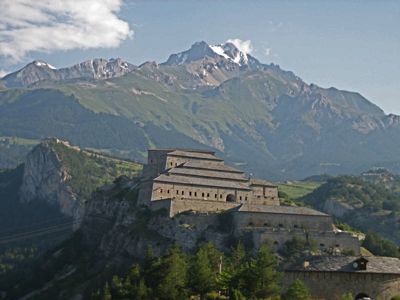 Photo: Mac Marshall
It's said Hannibal brought his elephants through here, but of course that's the boast of many valleys and passes hereabouts, and the closest evidence I know of is the stone elephants in the park in Chambéry, some distance off. (And that's not very good evidence.) 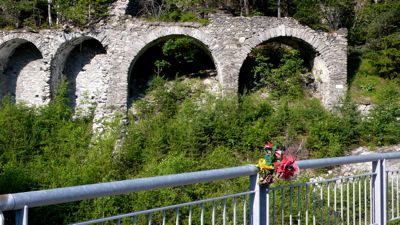 By nine o'clock we'd come to imposing ruins: an enormous stone-walled building had been here at some point, and before long a placard announced we were seeing the remnants of a plaster factory. Much of the stone hereabouts is rich in calcium, and the constantly swift-moving water must have provided plenty of power for the hammermills. Life must have been noisy and dusty here for centuries. 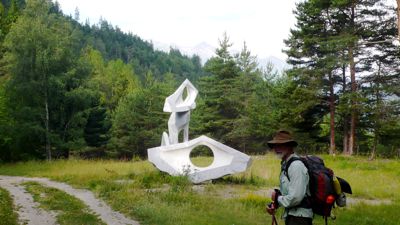 On we went, through forest road by now and climbing, of all things, through resort country. Soon we came upon an alarming white marble Modernist sculpture, looking quite embarrassedly out of place among the spruce and pines; and soon there were more: this had apparently been the haunt of a sculptor bent on improving the aesthetic appeal of these surroundings.

We were bound for the resort "town" of La Norma, a pocket version of Tignes with its many restaurants and bars, its residences, its ski-lifts and playgrounds. Before we actually dropped into la Norma, at the foot of ski slopes, we'd walked through a collection of little cabins, all neat and clean and distributed with an unusual concern for orderliness. Most of the license plates on the parked cars were Dutch, and when I asked of a woman out tending her front garden "Is het een café vlakbij?" she responded immediately "Jazeker, niet hier maar honderd meters verder," and no one gave a moment's thought to French.

We rounded a bend, walked out of the forest, and a little past ten in the morning found an immense lawn in front of us, with tall buildings at the bottom of the grassy bowl, to our right, and in front of them a number of cafés advertising Heineken and Amstel and such; and here we had a pot of tea. La Norma is so greatly used and occupied by vacationing Dutch that it might as well be Dutch. Whole families apparently spend weeks at a time here on their annual vacations, and there's plenty to do. Of course there are miles of hiking trails; we'd spent the morning on one ourselves. There are tennis courts, a softball diamond, soccer fields; there's playground apparatus for the children, and a busy activity center. 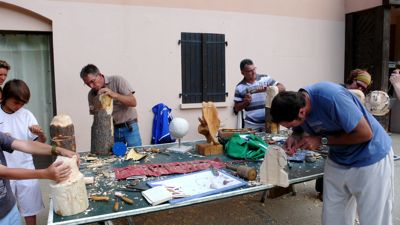 We watched a group of adults gathered at a worktable all busily making sculpture under the friendly but attentive eye of a teacher; he seemed to be getting remarkably good results from these hobbyists. 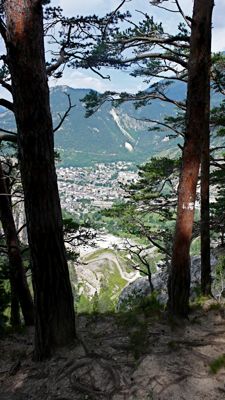 After twenty minutes, though, it was time to hit the trail: Modane lay ninety minutes off, according to our guidebook. That seemed unlikely given a glance at the map: it was right around the corner. But to get there we had to skirt an immensely deep hole, a gorge which has probably been quarried for millenia.

I hadn't been looking forward to Modane, which I recalled from our first trip to Europe, in 1974, when we spent the night there in a sorry cheap hotel across the street from the railroad tracks. Modane is an industrial town, hardly a city; it sprawls along the tracks, offering very little by way of shopping or leisure. But beyond Modane, maybe a twenty-minute walk, lies a twin city, Fourneau; here there were shops and cafés, the bus station that would make Italy an easy ride tomorrow, and a very nice little hotel, the first one we came to, set away from the town, off by itself.

We had errands to do: packages to mail, e-mail to read and perhaps send, tea to drink. We found a nice little regional museum on the main street, and there we saw an absorbing installation about the turn of the last century in Modane, when the really significant local industry was a factory producing mechanical musical instruments — nickelodeons, player pianos, and the like.

The museum also documented Modane as a way-station in the considerable tide of emigrants from Italy, which lies just across the border: this interested me because Lindsey's father was one of those emigrants, having left Chiomonte, an hour away by bus and train, in 1914, when he was ten years old.

And next door to the museum was a bar, and the bar was featuring another item the museum had introduced to us through posters, paraphernalia, and interesting historical documentation: absinthe. Recently restored to legality, absinthe was available in the bar, and naturally we had a glass. Much of the effect is very similar to the pastis that became so popular when absinthe was criminalized (and perhaps it was in order to sell pastis the laws were drawn up in the first place): the liquid was poured into a glass; a little cold clear water is added, immediately taking on a milky tone; then a pierced flattened spoon is laid across the top of the glass, a sugar cube or two placed on it, and drops of water are poured onto the sugar, gradually dissolving it and slowly running down into the glass. 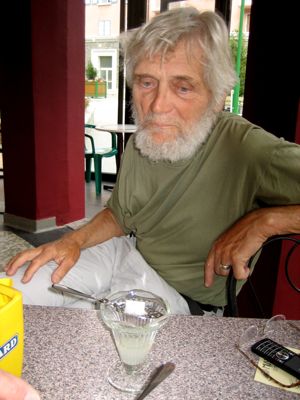 Photo: Mac Marshall
Mac wanted a photo of an absinthe drinker, and I obligingly posed. There's no doubt the drink, or more likely the legends that have built up around it and its adherents, affects the drinker, or at any rate this drinker. I felt and looked like an early Picasso, I think. But the effect soon wears off.

Back at the hotel I asked if we weren't staying en pension, bed and board. Ah no, replied the innkeep, I don't think that was my understanding. Then can you recommend a restaurant in town, I asked. Oh yes, he said, there's plenty, let's see... Then he called into the kitchen, to his wife, the cook: Marie! "Y'a assez pour les trois californiens?
Eh, oui, treize, seize, pas beaucoup de difference… as well sixteen as thirteen, she said; and we sat down to a delicious dinner: crudités with lentils, carrot, corn, and hard-cooked eggs; then roast pork with tartiflette. We slept well.

all photos cs except where noted
Posted by Charles Shere at 6:56 PM