I WAS UP AT 6:45 this morning; the weather seemed promising; we had a fine prune jam and even apple juice at breakfast. 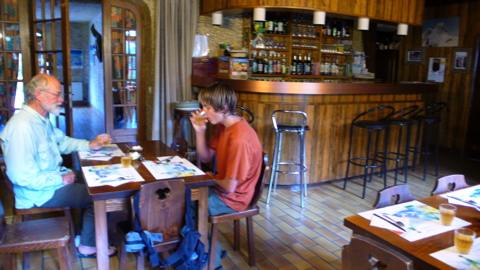 Mac and Henry at breakfast in Landry
To the épicerie for groceries: a donkey sausage, carrots, oranges, apples, dried apricots. Then, about 8:20, on the road: a nice though fairly steep climb through forest, occasionally picking fraises des bois along the way. 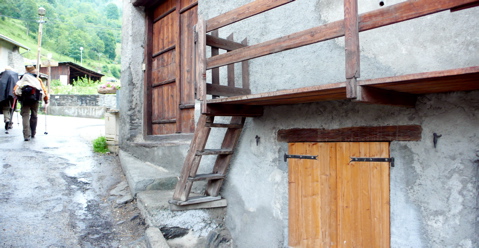 The guidebook promised hotels and restaurants at Le Moulin, ninety minutes and nearly 500 meters up the road, but nothing was open: Sunday drivers had parked there to take hikes in the woods. 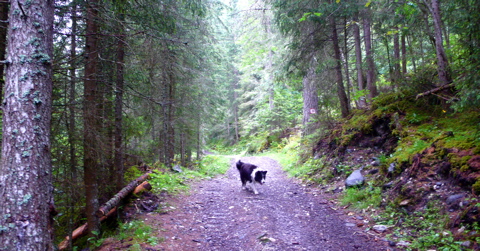 An aging border collie, bored I suppose with village life, led us out of town; I had to speak angrily to him in French to get him to give up his game. 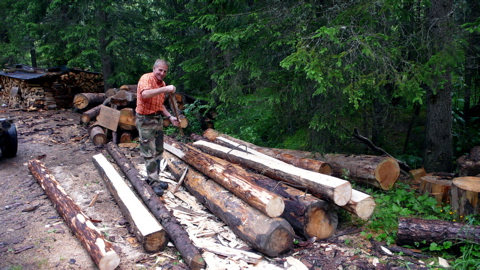 We continued on through the forest, passing a fellow quietly dressing fallen logs with his ax, and crossed the Pont Romano in hopes of tea in a hotel in Nancroix, but there too all was closed. Continuing up the left bank of the Ponturin we came to the long-abandoned School of Mines, ambitious and important in Napoleon's day. The setting, in its melancholy forest; the purpose, the extraction of lead and silver from the earth; and the long abandonment, together with the informational placards some of which showed the fancy, fashionable uniforms worn by students here two hundred years ago, all interested me intensely, 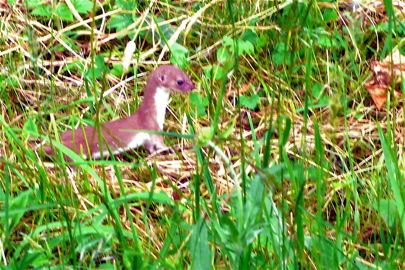 but Mac and Henry were more absorbed watching a tiny ermine they'd startled. Smaller than my hand, it had caught a vole almost its size, dropped it half-dead when they surprised it, and ran distractedly between its cover and its prey, its hole and its vole. We had a bite to eat, and went on, through Les Lanches; then Beauprez, where the French quartet was eating its lunch at a picnic table — but there was no tea, only a party of three or four playing diffident boules in the middle of the dusty road. For a kilometer the GR5 stayed on the right bank of the Ponturin, walking an unpaved road past fields and across an impressively stony dry watercourse, the last dry course we'd see this day. 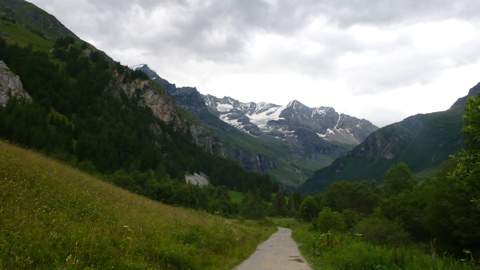 Soon, around the pass you see at the center of the photo above, the valley broadened and we were approaching the Refuge de Rosuël, whose modenist architecture, designed to deflect avalanches, had intrigued me from photos. They are deceptive, at least in summer: the "refuge" is more a gîte d'étape, commodious, with a busy bar-café whose tea service we were glad to patronize, sitting outside on a deck. It seemed to be at a surprisingly low altitude, remiinding me of the Yosemite floor. It was a little past noon, but we still had a lot of climbing to do, and rain threatened; I was sorry we lingered as long as we did, forty-five minutes. 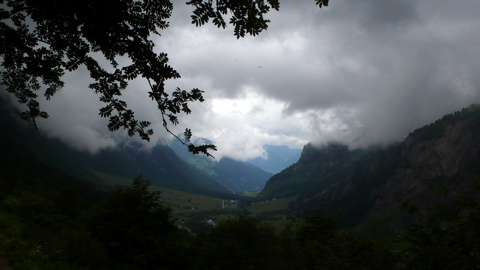 Soon after resuming the trail a real storm broke, with considerable lightning and thunder and heavy rain. We hurried our packs and ourselves into raingear, but twice we had to stop and take cover, once under thick foliage, again under overhanging rock. The many watercourses and waterfalls were readily explained: there's a lot of water in these skies, and every three days or so it's more than they can hold. 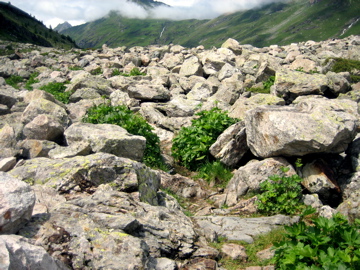 photo: Mac Marshall
We were in what I call sous-bois, underbrush — much of it rhodendrons and rosebushes. The terrain was often quite stony; the footpath was often running with water and we were drenched; but we had to press on if we were to reach the night's refuge by dinner-time. And in any case there was no place to get out of the weather, which changed rapidly between sun and storm: the few chalets we found were either locked tight or already occupied — I looked longingly into one window, and saw a cowherd's wife stretched out on a rude bed, glowering back at me. We did take a break at a forest service chalet, huddled under a sort of canopy at its door: but this too was locked up tight, and we pushed on, a very hard push, past the pretty Lac de la Plagne, through the narrow passage de la Grassaz, and finally in another hour or so to the Refuge du Col-de-Palet, arriving at 6:10.

There was a fire in the wood stove, and we were just in time to clean up, dry off, and warm up with vin chaud, mulled red wine, before a very welcome dinner of nettle soup, local sausage (biot) and polenta with a delicious red-wine-and-vinegar sauce, tomme de Savoie, and of all things a brownie for dessert.

all photos cs except where noted
Posted by Charles Shere at 5:04 PM