A good night's sleep, in spite of a lumpy, hard mattress, the only one of the trip. It rained overnight, but during breakfast it stopped. And it was a good breakfast: I'd seen Madame under her umbrella trudging off to the boulangerie, and we had fine croissants with nice apricot jam.
We set out a little after nine, walking past an interesting modernist church that had replaced one destroyed during WW2. 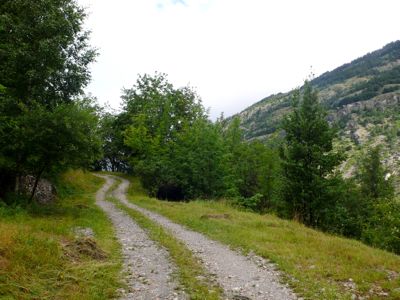 The road was still wet and rather muddy and soon led to a narrower path through forest. 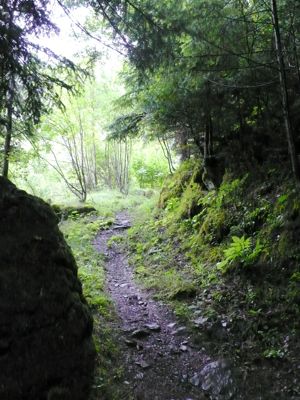 We reached the Valfréjus ski station by eleven, and here we rested half an hour, taking a pot of tea and shopping for a picnic lunch. Then we returned to forest path and road, climbing steeply for an hour or so to the Lavoir fortifications. At this point the entire pass is apparently one huge mostly invisible fortification; what looks here like a pillbox is in fact the entrance to extensive underground galleries and casemates. 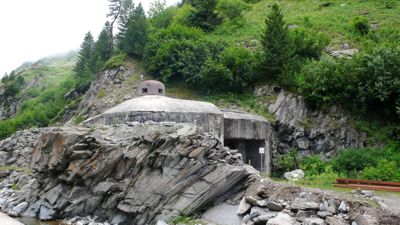 At lunch we'd met two Canadians now living in Norway: they were walking the entire length of the GR5, having started in April. What one stretch would you omit next time, I asked them: easy, they said, the Lorraine, that first stretch in northeast France: flat, uninteresting country. 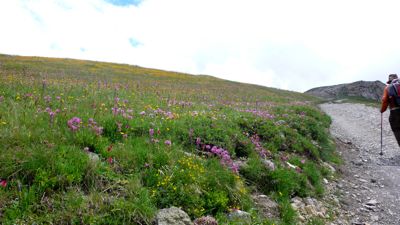 Not this country. We'd climbed out of forest, above trees, into alpage, fields full of alarmingly green grass and wild with wildflowers. It was near here, thirty years ago or so, that I first met the alpine Trolius: we were too late for them, but there was God's plenty of other flowers to see. 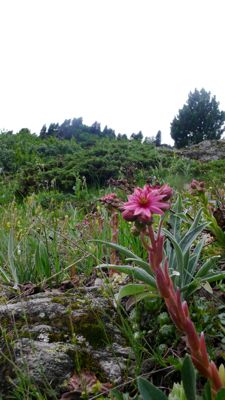 Mac was delighted, photographing them in close-up and identifying them; I mostly delighted in them en masse, fascinated by the color-texture they provide, whether under full sun or cloud shadow. 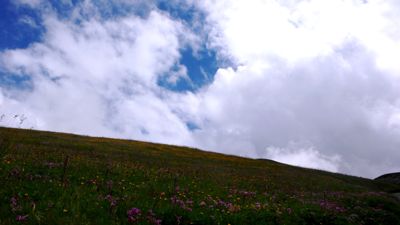 We climbed further, then took a bit of a detour, leaving the GR5 for a few minutes to ascend to the Col de la Vallée Étroite. Here a wooden cross marks the former French-Italian border, and here Henry and I looked down into storm-clouds over the valley ahead, then turned back to the track and up, across snow and scree, to the Refuge du Mont Thabor, arriving about 3:30. 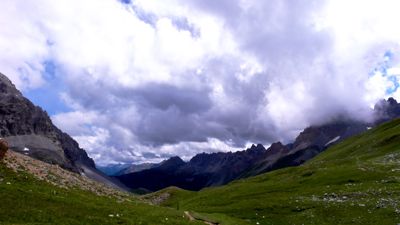 We were well used to marmots by now, having seen and heard them for weeks; but here for the first time we watched them deal with an invasive border collie. A marmot would screech; collie would run as quickly as the scree allowed; marmot would disappear at the last minute, handing the dog off to another marmot a hundred feet off in another direction, and the process repeated. Henry swears he saw a marmot deliberately dislodge a fairly large stone that rolled downhill narrowly missing the dog, and I can't contradict him. 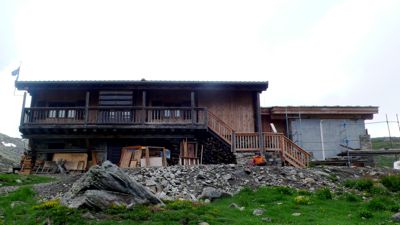 Mac had gone on to the refuge ahead of us and welcomed us to rather a busy place. A few French had arrived before us, and it was a bit of a shock, after our two nights in a proper hotel, to once again share sinks and mirrors with strangers in their underwear. 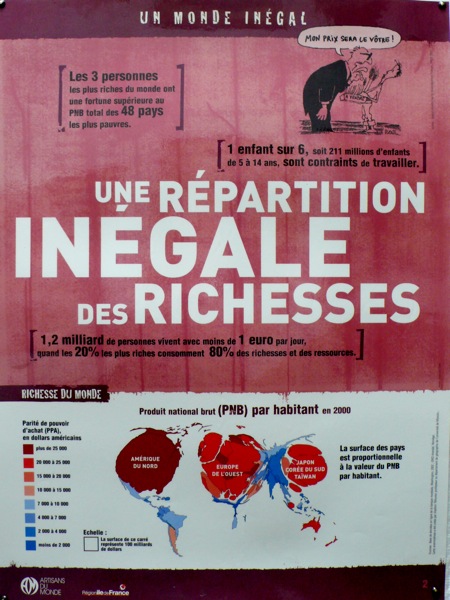 Like so many of the refuges, Mont Thabor seemed politically very aware: a number of posters hung in the stairway, persuasively describing Un monde inégal, a world out of equilibrium in which the three richest people in the world share a fortune bigger than the total worth of the 48 poorest nations.

I stood a while reading these posters (and photographing them), and another rambler, noticing my interest, guardedly sounded out my own opinion, in fluent but not native English. These refuges have their point of view, he said; I share that point of view, I responded. The conversation was short and interesting, and he seemed thoughtful and open-minded.


Dinner was soup, salad, lasagne, cheese, and apples; and it was good. I turned in early: I like going to bed, and rising, before the others. 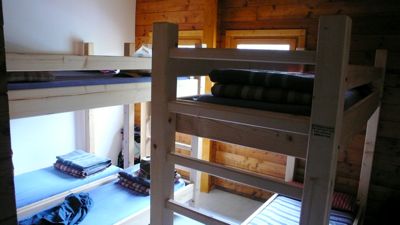 all photos cs except where noted
Posted by Charles Shere at 12:20 PM