Beginning with the walk of July 14, additional photos from our walk across the Alps can be found here
Day 26: July 15, 2008
Today was going to be a long day: we could stop in Montgenevre, I've stayed there before, but that would leave a very short walk next day to Briançon, and I wanted Mac and Henry to spend the night there — it's such an unusual place, pretty and unusual; and to my mind it signalled the three-quarter stop, after which our walk would definitely be winding down. 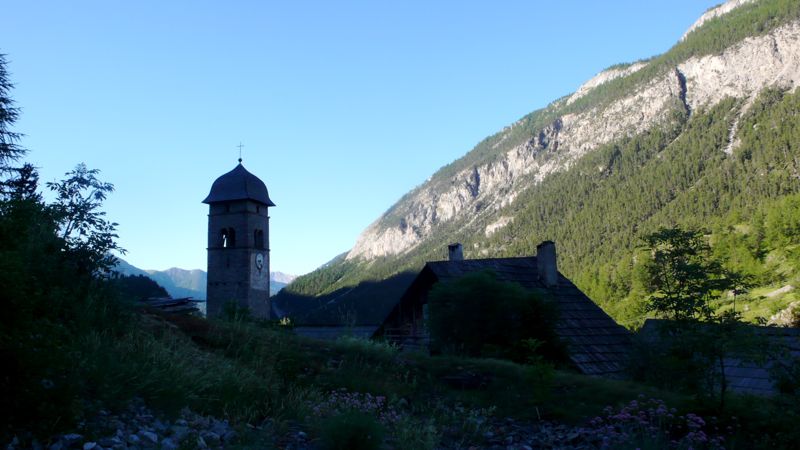 We left the hotel about 8:30. Madame had forgotten I'd asked for bag lunches, and when I asked if there were épiceries en route she clearly remembered, stepped back into the hotel, and came back out again with three apples and three peaches: no time to make sandwiches. 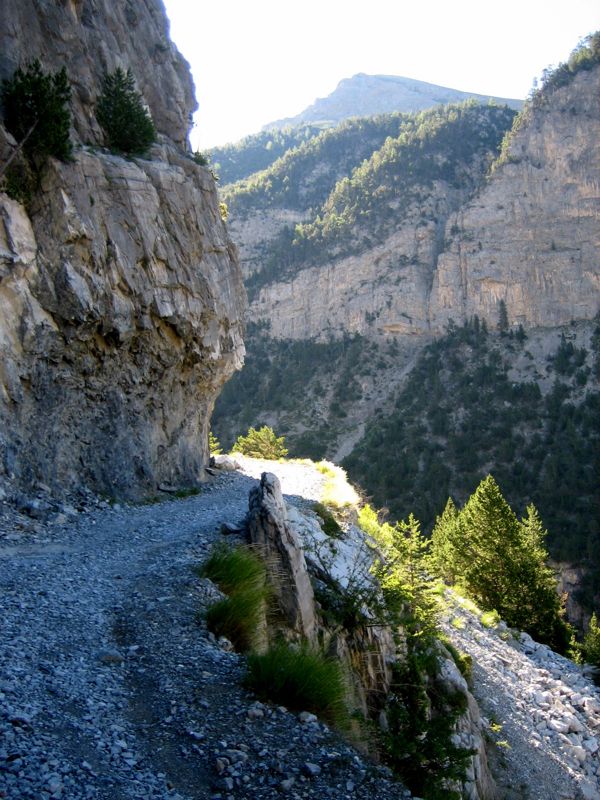 We left Plampinet behind us, taking a gravel military road that climbed steadily, up a number of lacets or hairpins, vertical rock to our left, considerable drop into a deep gorge to the right.

At one point we stopped: Henry wanted to explore a tunnel that seemed to lead back into the mountain below the road. It turned out to be merely a culvert, but an impressive one, with names engraved by the soldiers who'd built it in 1908 — exactly a century ago! — and, predictably, scrawled cartes de visite from more recent explorers.
photo: Mac Marshall 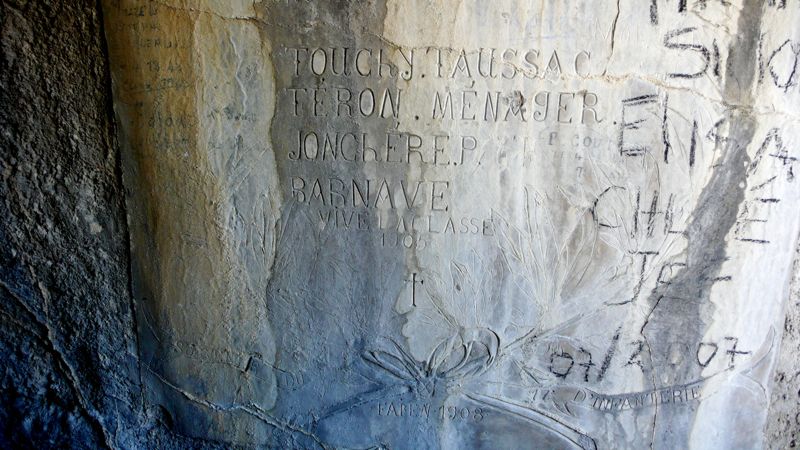 photo: Henry Shere
While we waited for Henry, the Primhaks arrived -- the couple from Sheffield we'd met back at Mont Thabor and dined with last night in Plampinet. Rob joined Henry in the culvert; Bev good-naturedly indulged him; and we continued on up the road, stopping to eat our peaches at the chalets des Acles. 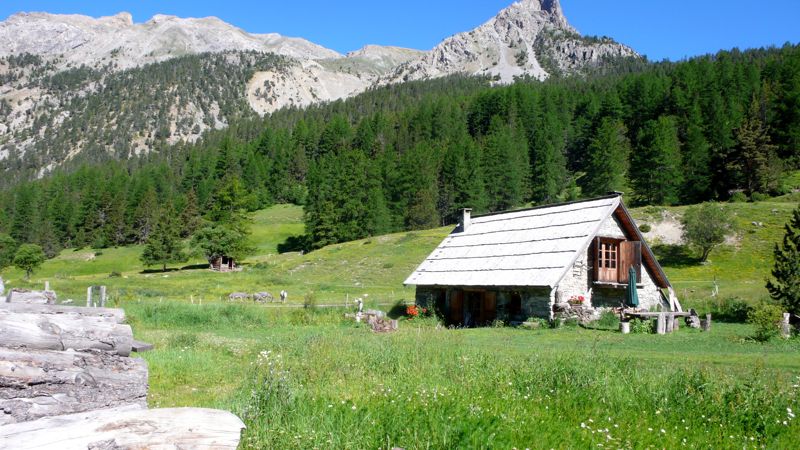 These chalets are maintained, apparently, by and for the shepherds who manage the transhumance, the annual summertime herding of cattle and sheep through these lush pastures. This has gone on for centuries and seems to do the ecology no harm, though there are those who complain certain species of wildflower are in decline. The chalets range from out-and-out ruins, with collapsed or missing roofs and sometimes walls crumbled away, to quite tidy homesteads that look to me to be viable year 'round — though of course I haven't been here in the dead of winter.
In another two hours, just at noon, we arrived at the col de Dormillouse, a thousand meters above Plampinet.. Mac had got there first and was grinning in anticipation, standing with a pleasant-looking couple who greeted me in Dutch. 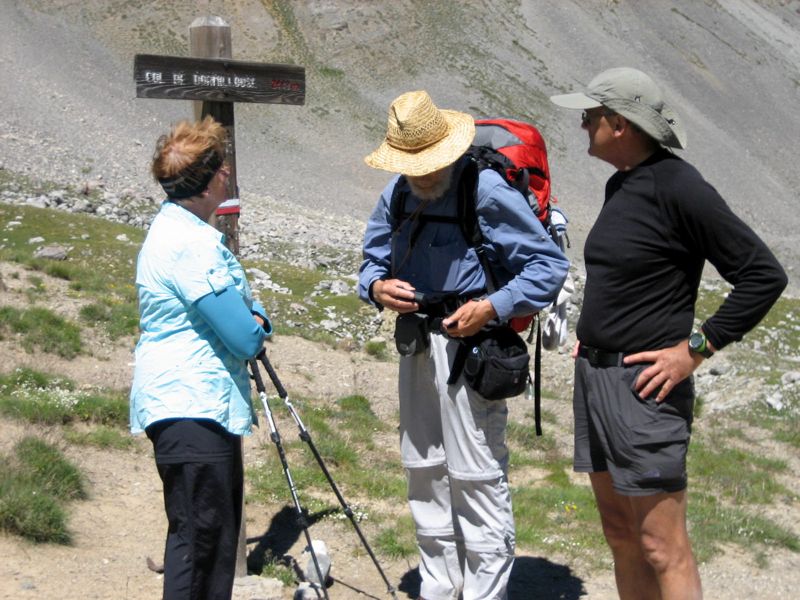 Henny Both, CS, Hans Bothe. Note white & red balisage on post (photo: Mac Marshall)
Hans and Henny Both turned out to be from Ten Bosch, the second Dutch couple we'd met from that city (a city I've never visited). Mac introduced Hans to me as a teacher of gymnastics, and I politely asked what Henny might do: She's a psychologue, Hans replied; whereupon I turned to her and asked "What's wrong with me?" "Everything," Hans beamed, "that's what she'll tell you!" A jovial couple whose company we would enjoy later on as well. 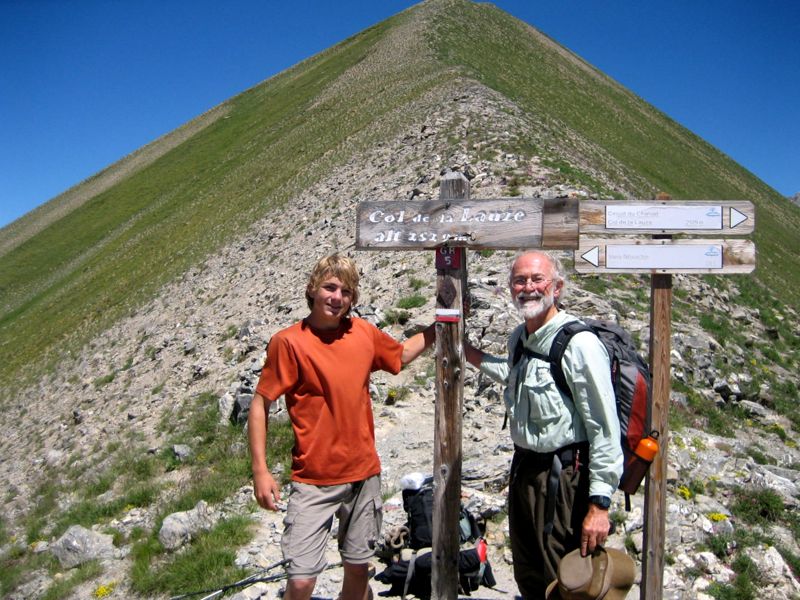 Henry and Mac at the col de la Lause
On, then, to the col de la Lauze, a hundred meters higher and half an hour down the trail. Rob Primhak wasn't content with the col: seeing a clear view to the south he scampered up the ridge on our west to the nearby summit. 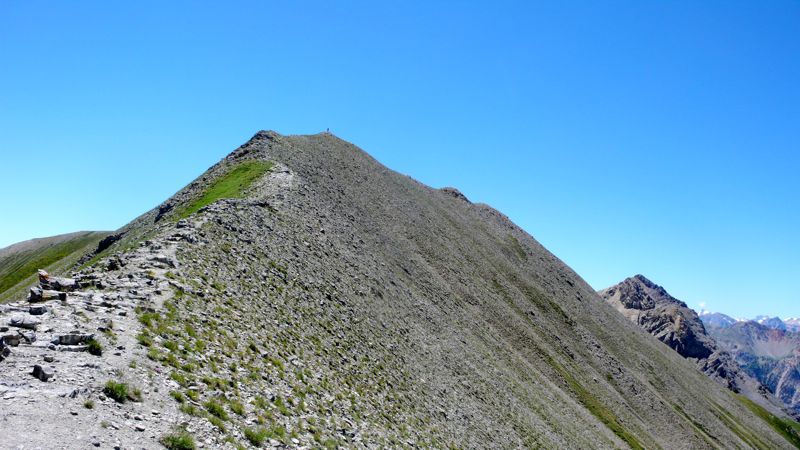 We continued, knowing we had a long way yet to go. It's a gentle descent into Montgenèvre, through park-like forest and occasional clearings, and we met tourists along the way: a big group of noisy Italian adolescents; then, by contrast, a pair of sixtyish Italian men, nicely dressed and making a bella figura, out for a comfortable stroll up to Mont Chaberton and back. We were very near the border, and looked down the valley to the north at Bardonecchia at one point: but instead of entering Claviere, a kilometer or so to the east, we turned west and walked eight times that far, it seemed, to Montgenèvre. 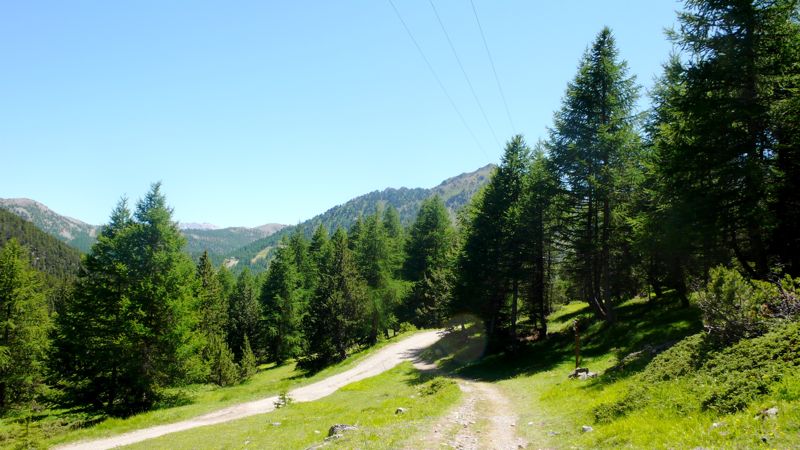 When I was last here, not that long ago, this was a small border town. I told Henry how I'd scored a room when all the hotels were closed: entering the hotel dining room, where the staff was at dinner watching a quiz show on television, I hesitated: vous avez une chambre pour la nuit?
Non. Then the quizmaster intoned: Les sanglots longues / des violons / De l'automne…

Verlaine, I said authoritatively, and without thinking of what I was doing. The staff turned their faces from the television back to me, surprised I was still there. The quiz clock ticked in silence, the contestants looked pained, a buzzer sounded, and the quizmaster said Ah, dommage, c'est Verlaine. The staff looked back at me again, rose from the table; the oldest man came to me and asked how many beds we'd need, his wife went into the kitchen to find us something to eat.
You see the usefulness of a little knowledge of French poetry, I told Henry.

But Montgenèvre had changed in the meantime; it's full of condominiums, both built and a-building; it's ugly as sin, and I couldn't find the hotel in question, or any other place we'd want to stay. Besides, I pointed out, the old city of Briançon can't be far; let's press on. And so, after half an hour for a sandwich at an unpleasant beer-hall sort of place, we set out down the main road, N94, brnching off into the Sestrières forest, knowing our GR5 had to be in there somewhere, though balisage was for the most part lacking, and we found our way by map, guess, and logic. 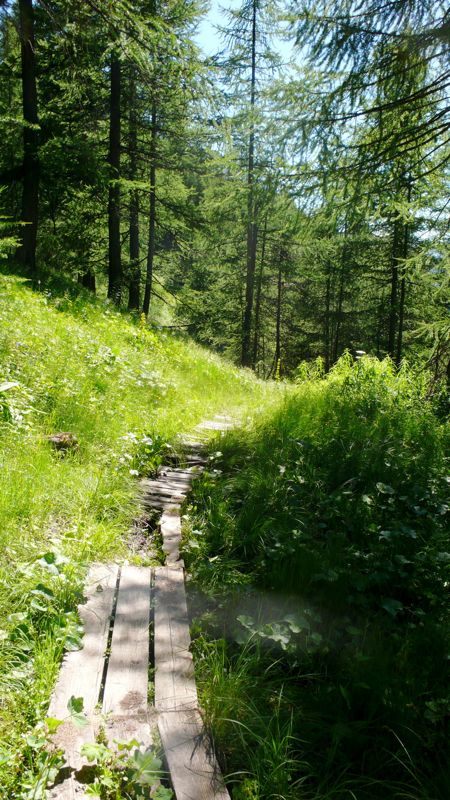 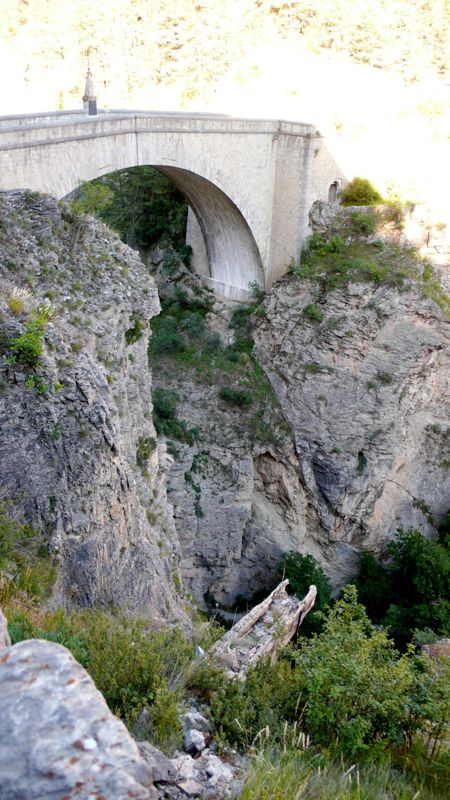 In fact Briançon was three hours away, down steep pleasant forest trails and unpleasant lumber-roads, beyond the hamlet of L'Envers-du-Fontenil, and across the magnificent
Pont d'Asfeld, built in 1734, 40 meters long and 56 meters above the river Durance. We crossed, walked to the principal street, and booked into the first hotel we found, old-fashioned and charming and, fortunately, blessed with a decent kitchen.

It was only 6:30: we had plenty of time for a shower and change, a walk around the curious, picturesque, entertaining old city and its moody 18th-century fortifications, and a late snack before one last admiring glance at the gathering night. 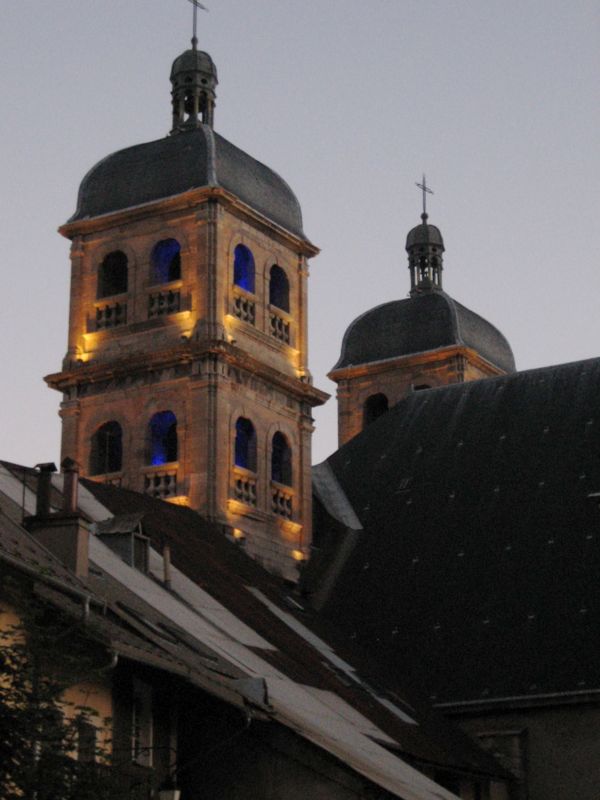 all photos cs except as as noted
Posted by Charles Shere at 7:01 PM