I don't know if I should credit the Dutch exclusively for it, but more and more hotels in France and Italy are serving breakfast buffets these days. We were up at 6:45, noted threatening weather again, and hit the breakfast by seven: granola, fresh fruit, sausage and cheese, bread and croissants, boiled eggs, juice and coffee — a far cry from the usual mountain refuge breakfast of bread, butter, and jam with café au lait. And the desk clerk-proprietor, hearing we were tackling the Col de l'Iséran that day, gave me an enamelled medal he'd received a few years earlier commemorating that feat.

We lacked bread for breakfast, though, and didn't want to backtrack into town. We'd heard there was a fabrique, a wholesale bakery, not far off the GR5 on our way out of town, and there we bought a loaf of bread while admiring an old, slow, jet-black bakery cat, flour on his whiskers.

Then, about 8:30, it was a kilometer or so up a paved road and a right-angle turn to a ski piste — a wide greensward under the téléférique or ski-lift, which climbed quite steeply away from the Isère. Before long we'd lost our way, having overlooked the balisage pointing the correct way — if indeed it was there: they sometimes seem lacking when most needed. 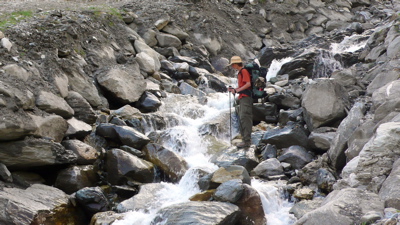 We were walking up a stony riverbed, finally crossing the stream on loose stones.We realized the error soon enough and found the path, which had left the piste and struck out, equally steeply and by means of frequent hairpins, as a narrow sentier, a footpath through fairly dense forest. Today's climb is to the highest point on our entire walk, the Col de l'Iséran, 2764 meters; and before long we're back up above the trees again. 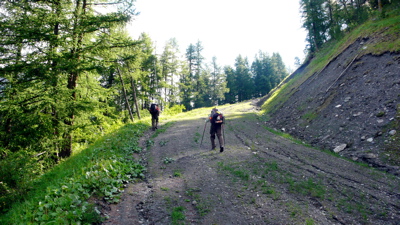 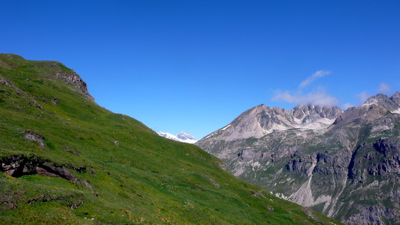 We come out of the forest onto a broad unpaved road leading to bare alpage, the ski-lifts always present to remind us of the real economy these days — sports et loisirs, fun and games. 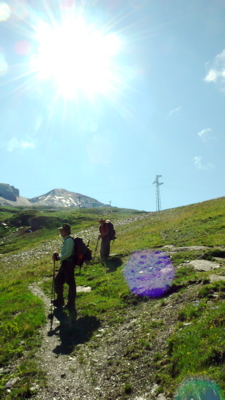 We stop at a curious concrete slab to eat an apple, and idly investigate what might be underneath a manhole cover: a deep concrete-lined hole, steel ladder-rungs set into its wall. These Alpine prairies are full of works of man: dams, waterworks, electricity conduits, bunkers, herdsmen's refuges; the history stretches back for decades, centuries. 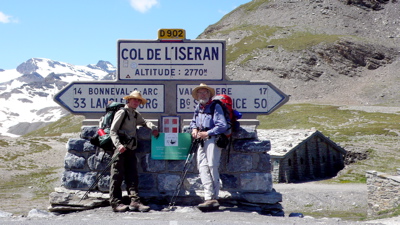 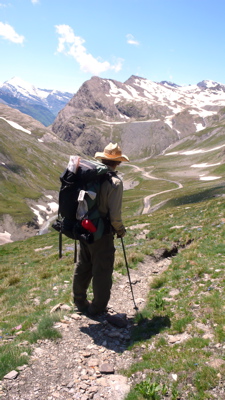 Then by 11:45 — how did we manage it so quickly? — we were at the col, over 9000 feet above sea level. A col is not a summit, and we were not alone: a number of cars had driven up D 902; there was a good-sized parking lot, and not far from the old stone church stood a more modern hotel-restaurant-gift shop sort of building, not terribly handsome. Here we had tea and tart, paying a pretty penny for them, and looked at the postcards, keychains, napkin rings, toy marmots, walking sticks, and assorted other kitsch offered as souvenirs, and decided against any of them, and struck out again 45 minutes later. 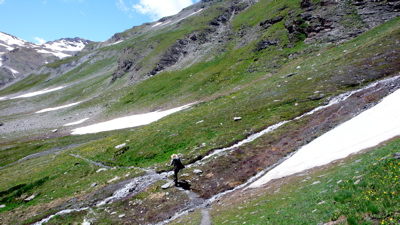 Our descent was in three stages. First there was a laborious descent of 230 meters over wet alpage on tedious switchbacks: it took forty minutes to reach a resting place, the Pont de la Neige, where we stopped for twenty minutes for our picnic lunch. 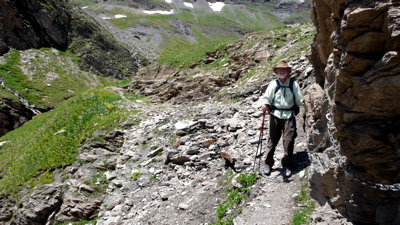 Next came one of the most memorable stretches of the entire month of walking, the Gorges de la Lenta, a fast-running stream on our right and a long way below us. We walked along a narrow path on loose scree; to our left a vertical wall of live stone, to our right a steep slope of very loose scree — lose footing here and you're in a bad way. Mac overcame the last of his vertigo here, if he hadn't vanquished it utterly before; and his reward was the first edelweiss we'd noticed on the walk. 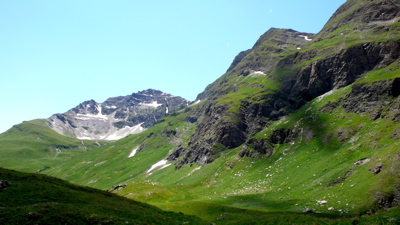 The gorge opened out into a broader valley. We walked past a sort of dispersed hamlet of ruined stone refuge-huts, rounded a corner toward a maison de chantier built years ago to house road-workers, and met a couple of British fellows out with butterfly nets, intent on identifying, or counting, or merely annoying the local insect population. I asked if they had a permit to do this, and they assured me they did not, and were concerned that I might be an officiel de la bureau des études sur les insectes, and I assured them that I was, and was prepared to collect a pretty stiff fine from them, but they did not pay. 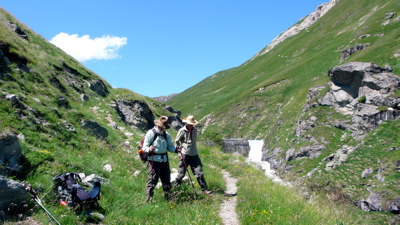 Next we walked along the shoulder of D902 a kilometer or two, and then steeply down a mule-path and through a few pastures and back yards and out into the village of Bonneval-sur-l'Arc, for we'd decided to take the low road of the two variants GR5 offers here, avoiding the high country, saving a day or so, and finding greater certainty of lodging for the night. The tourist office offered us the Hotel Glacier des Evettes as our cheapest alternative, and it lay only ten or twelve minutes further along the walk: we arrived at 3:30. 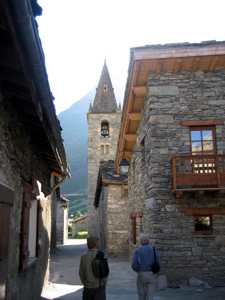 A bottle of mineral water, a phone call home, a walkabout in the "old village," billed in our guidebook as one of a number of quaint, isolated hamlets along the Arc river between here and Modane. We'd chosen this alternative for that reason too; we were given to understand we'd see a way of life all but disappeared elsewhere, the true ancient montagnard traditions as they'd been preserved through the centuries, in a valley so isolated it was still more Italian, and certainly Savoyard, than French. 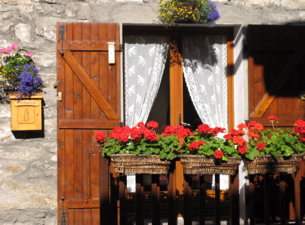 Alas, the village seemed to me a mediation of Carmel and Chiomonte, Lindsey's father's home town on the other side of the Italian border. It was all cleaned up, neat and tidy and set about with potted geraniums. There were no overhead wires, and cars were discouraged from driving through the town on its narrow streets. You had the impression it was a movie set, that a few truckloads of dirt and horse manure, and taking up the bed & breakfast signs, would make it ready for a movie set in medieval times.

We ate in our hotel: a slice of tasty zucchini bread in a dish of tomato sauce, a faux-filet with macaroni and cheese, a fine crème caramel. I contrived to plug my trusty PDA into the hotel computer overnight, to charge its battery: the desk-clerk had no idea how to do this, but his ten-year-old boy smiled at me and solved the problem in the wink of an eye. C'est toujours les jeunes qui savent. And we had a hot bath before bed!

all photos cs except where noted
Posted by Charles Shere at 12:33 AM