Beginning with the walk of July 14, additional photos from our walk across the Alps can be found here
Day 29: July 18, 2008

Breakfast was decent, but I was troubled: there was something a little odd about this gîte, or perhaps the guy who ran it, a Belgian; I never quite understood either what he was saying or why he was saying it; and besides I knew, we all three knew that today and tomorrow would be long hard days, with lots of climbs and very little by way of refreshment possibilities. And I was nervous about finding beds. Mid-July is as bad now as August used to be; there are lots of people on the trails and in the gîtes d'étape and the refuges; and we'd heard, yesterday, that there would be no place for us at Fouillouse, the logical stop tomorrow night. What to do? Ask for help at the tourist bureau in Arvieux, only a kilometer or so down the road, but off our GR5. 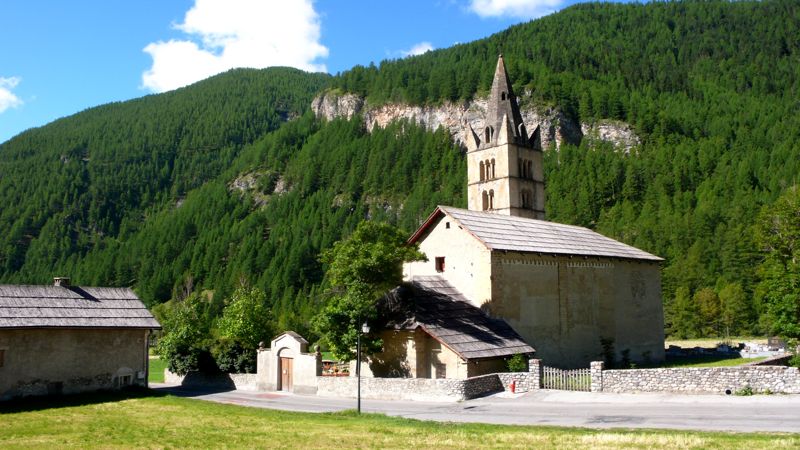 So, leaving la Chalp about quarter past eight, we got to Arvieux in fifteen minutes, and the tourist office was not yet open. We killed a little time at the 16th-c. St. Laurent church, whose tower pleased me for its similarity to the one in Chiomonte, with its four "ears", and whose churchyard contained curiously fenced-off graves looking for all the world like little rustic beds, 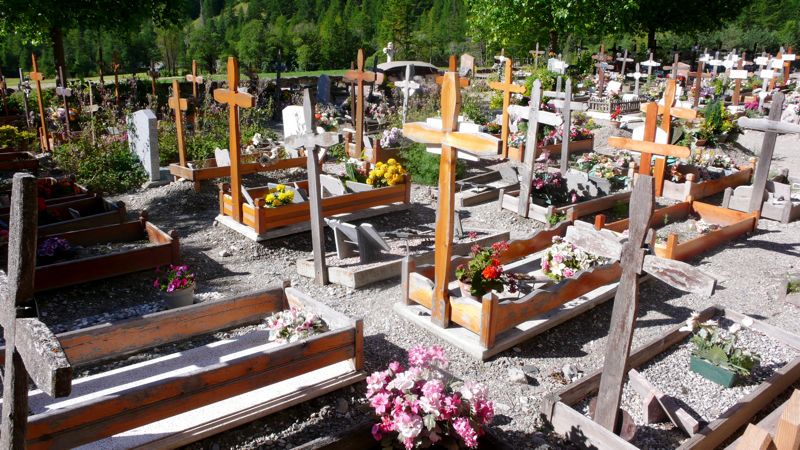 and whose interior was quite attractively painted, 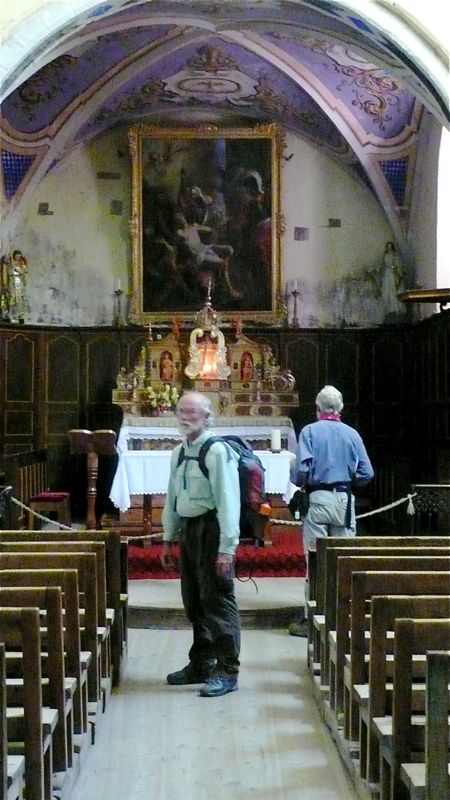 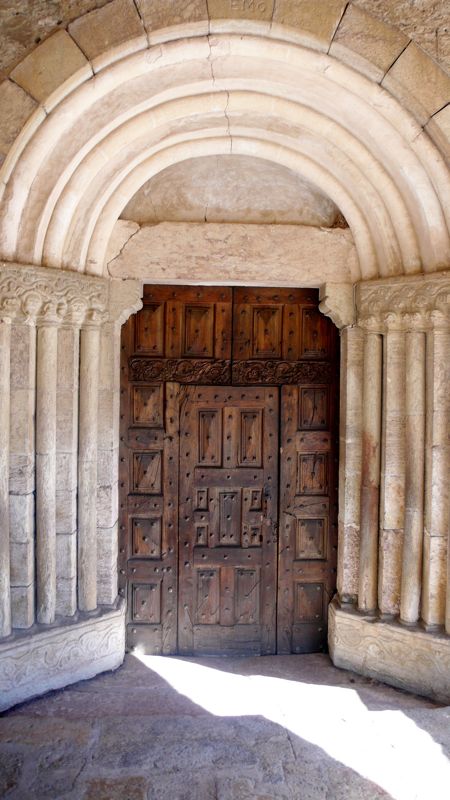 and whose portal was suitably Romanesque; and then we went to the tourist bureau whose madame told me rather brusquely that of course while the Fouillouse refuge was fully booked tomorrow night there would be no trouble getting a room in the refuge in St. Paul, only a little off GR5 before coming to Fouillouse; she made the telephone call; our Belgian had already booked the last three beds for tonight in Ceillac, so now, we thought, we had no worries. 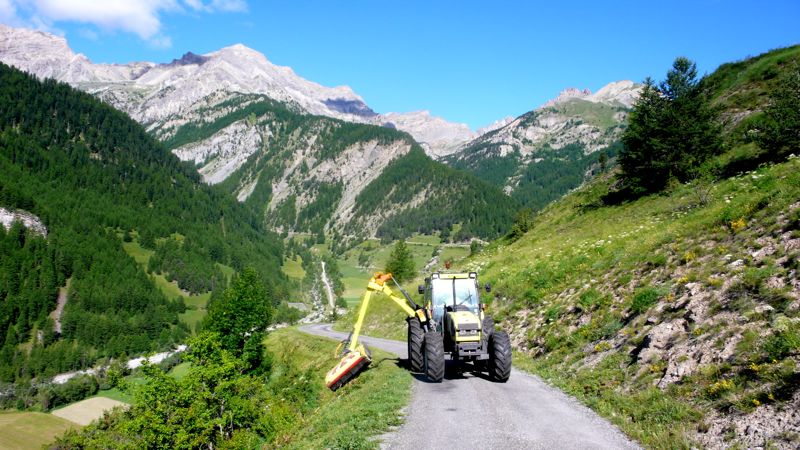 At 9:45 we finally left Arvieux and took a road leading by hairpins up the flank of La Muande easterly, marveling at the wild rosebushes and saddened by the tractor-mounted mowing machine that threatened them as it clipped the shoulders of the road, why one wondered, only to cut down the flowers. 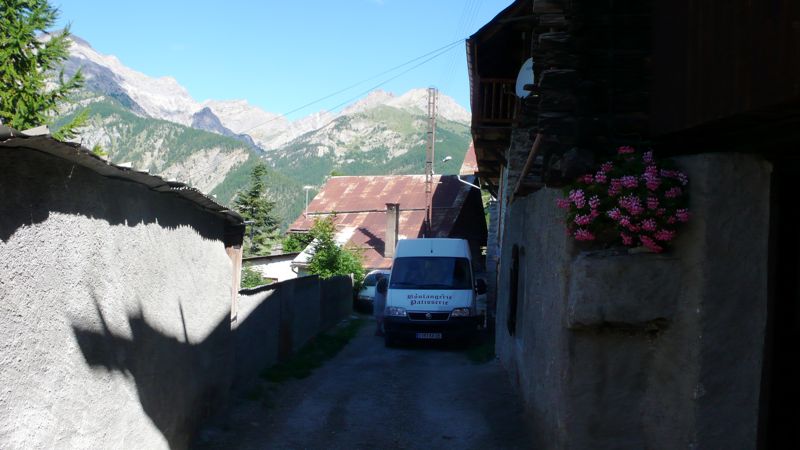 And then we were in a most interesting hamlet, Les Maisons, where a twice-weekly delivery truck was just supplying the three or four households with bread, and where we sat for a rest on a bench, 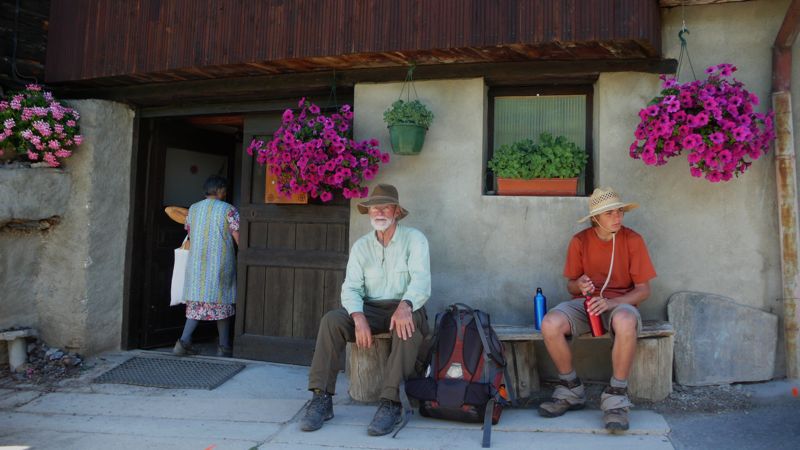 Resident; Mac; Henry: Les Maisons
and admired a very curious, inexpensively built church-tower. And then off again on a pleasant traverse to a glacial lake, the Lac de Roue; 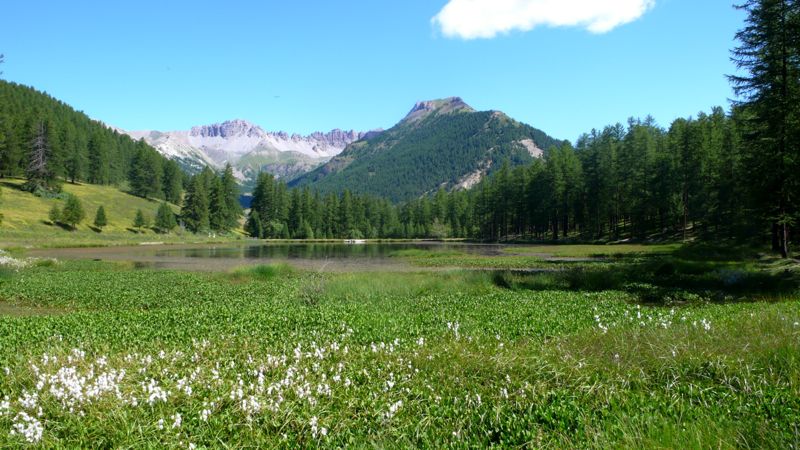 and through pleasantly forested country, still fairly flat, until, at what seemed to be another picnic-ground park, we suddenly were made to descend very sharply indeed down four hundred meters or so to the gorge of the Guil, above which the départemental D947 wends a tortuous two-lane route on which we found traffic to be not only stopped but actually backing away from our proposed rest stop at Château-Queyras, with its famous fortification. By now it was exactly noon, tea-time; but the first place we came to wasn't much more than a convenience store with a picnic table outside, right next to the main road which by now was humming again with traffic. 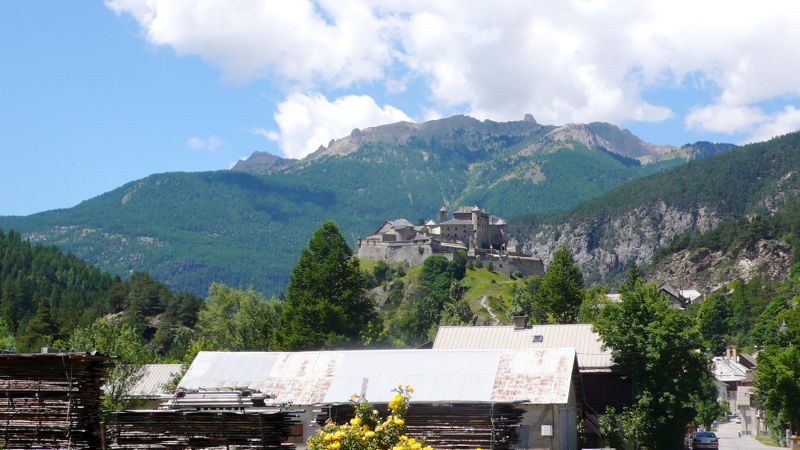 Fort Queyras above the lumber yard
We walked down the steep street to the old town down by the river, looking for another tourist bureau for another attempt at a bed in Fouillouse tomorrow night, but found no useful information — in fact, we were sent in the wrong direction to rejoin our GR5, and lost twenty minutes or so walking an uninteresting paved road.
Finally we found our trail, though, at a bridge crossing the Guil, a narrow fast stream at this point, and we began a laborious climb up a thousand meters in ten kilometers to the oddly named col Fromage. That sounds hard, and it was, a little; but the afternoon was softened by the marvelous display of wildflowers. Much of the time we were waking alongside the torrent Bramousse, through fields not really all that steep; the afternoon was warm and pleasant, and we took languid rests to admire it all. 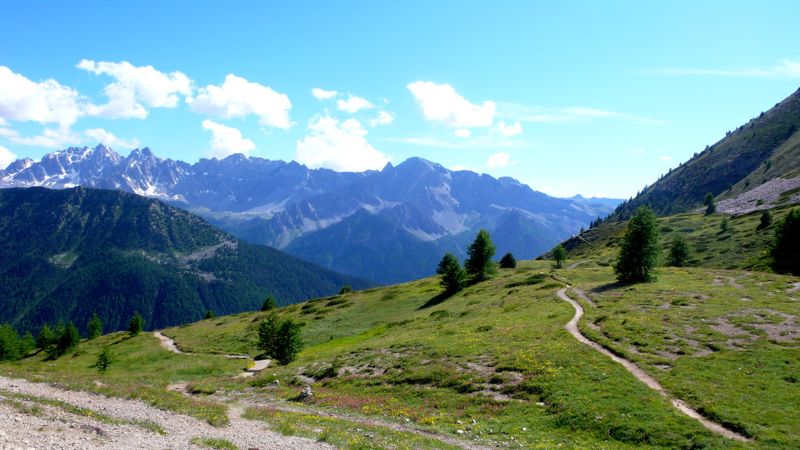 By five o'clock we finally reached the Col Fromage, 2300 meters (7500 feet), and had only — only! — to descend 700 meters in a little over an hour, to the town of Ceillac, our four German friends, the Gîte Balladin (nearly full: we'd been lucky to get accommodations), and, across the street, a real bar where I could get a real Martini, it being Friday evening.
I had to teach the bargirl how to make it, of course: No, not Martini Red, a gin Martini. She found a cocktail shaker somewhere, put an ice cube in it…
Wrong already. I had her put several more cubes in, and then the gin, no, twice that much at least; and then the vermouth, no, not red, sec, white: and now shake it fifty-six times. Cinquante-six, mussieu? Bien sûr: let me show you: and I shook the thing fifty-six times, and forbore to ask for olives not knowing what might happen. It was my first Martini in a month, and it was good enough. 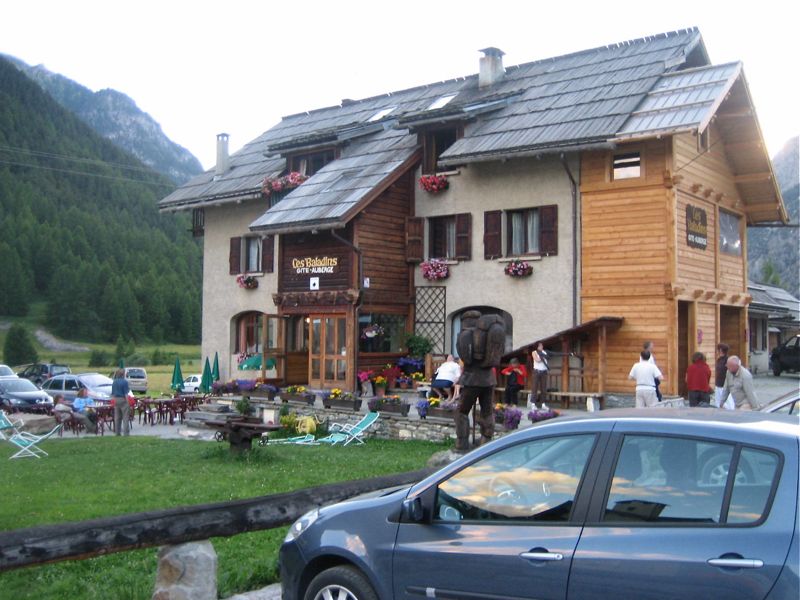 photo: Mac Marshall
Back to the gîte, then, for a convivial glass with our German friends, and then dinner, and an early night to bed.